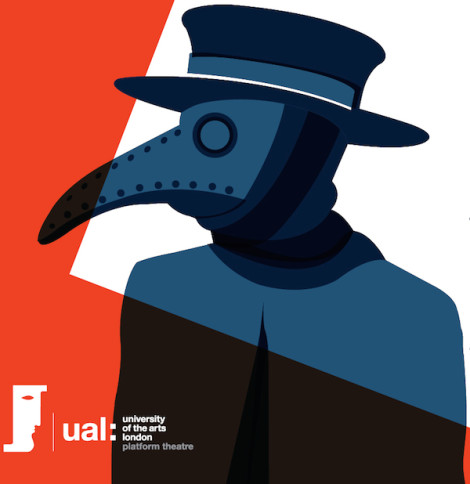 We spoke to students from Drama Centre London and their director Jonathan Martin about their most recent production, One Flea Spare, an intense play written by Naomi Wallace, set in plague ravaged London.

Why did you choose to perform One Flea Spare in particular?

Jonathan Martin: I read this play for the first time about three years ago and thought that it was a really unusually interesting play that has a lot of resonance. It is set in 1665 during the outbreak of the plague in London and when I re-read it recently it coincided with the Ebola outbreak. It’s one of those plays that because the themes are so strongly to do with survival, love, sex and death it will always have meaning. It is a very metaphorical play so you can read it in many ways. I suppose when I read it for the third time before actually choosing it, I thought yes, it’s a really unusual, terrific play and still very applicable to today.

What were your initial reactions when you found out that you would be performing this play?

Jed O’Hagan: Excited, definitely excited. I have never been in play from this period before. I really enjoyed the read through, there is just so much in the play. We all loved the characters and couldn’t wait to get stuck in.

One Flea Spare has only been performed professionally a hand full of times, how did you find inspiration for your production?

Hannah Moorish: We talked for a long time, really delving to find character inspiration, and understand the world, we tried to liken it to something we could all relate to. We had a historian come in who is a specialist on the plague so we had a real sense of the visceral feeling of the time. From there it has just really developed through rehearsals and finding out what works and what doesn’t work.

Through finding similarities between the Plague and the Ebola outbreak, did you find yourselves using quite contemporary references within the production?

Jonathan Martin: The play was first performed in 1995 so it is not a strict period piece; it is essentially a contemporary view of the period. As a result you get a very contemporary take on all sorts of issues for example, the sexual politics, class politics and the role of the body. It gives us an opportunity to investigate the play outside of the historic representation of the plague.

Hunter Bishop: It’s very much contemporary mixed with classical. For example we’ve been drawing on characters from Philocrates to Heathcliffe and contemporary films , even drawing on people that we may known in real life as well to help build on our characters behaviour.

In what ways did you feel your character has tested you?

Georgie Morton: I am playing a 12 year old and it began as this terrifying thing where you have to really consider what it is to be a child. In terms of her experiences I have to consider what she has been through, especially considering her age. I had to think about how I could use what I know and what I have been through and marry the two. But the whole play itself is completely like that. It’s about sex and death and you have to draw your own reactions into your characters. It’s been incredibly challenging.

Hannah Moorish: I would say that it has definitely pushed us the most that we have been, largely because it is such a different world. Jordan and I are playing quite old characters and, as with Georgies’ character, it is about finding the truth in their reactions. The characters experiences are so extreme that it has been testing.

Jordan Kemp: We were just talking about immanent death and mixing that in with the challenges of transformation. You have to do really imaginative work to start to realise what it might be like to be faced with that worry and then how you respond and how your character would respond to it. What’s stopping them from losing all of their stability and running for the hills? Trying to discover that strength in our characters was quite a challenge.

What is a classic Drama Centre London performance?

Jonathan Martin: I don’t think that there is such a thing as a classic DCL show. Our first duty is to do plays that are suitable for actors. We have to find plays that we think suite our particular actors, their skills and the gender balance. But we are also looking for plays that are not done to death. One Flea Spare is by an American writer and it is not that known in this country, not many people will know it – and that is becoming something that is quite important to us. We want the public facing repertoire of our actors to be interesting and unusual. I was speaking to the cast just the other day and I said that I think we follow Woody Allen when he says that the only themes of interest are the big themes, sex, love and death.

What is your next big project?

Jonathan Martin: Next term all the actors are going to be taking part in a play specially commissioned by Drama Centre London by Mark Ravenhill who is a very well known and interesting writer. He has written a play based on the aristocratic victims of the French Revolution. I think it will be another glorious portrayal of sex, death, decay and the politics around all of that.