The Age of New Babylon is the Lethaby Gallery’s first student-led exhibition. It ran from 23 November–13 December and was curated by final-year student Sara Gulamali and alum Samboleap Tol. Here, Gulamali takes us on a curator’s tour of the exhibition and discusses the selected works in depth.

Upon entering the Lethaby Gallery, Sam and I were conscious of the connotations of the space – we knew it as a white cube space run by the institution. Given that this was the ﬁrst student-curated show, we felt it was important to make it feel diﬀerent to anything that had ever taken place in there before. This is where our initial idea to create interventions came into play – such as changing the colours of the lights or having ﬂowers existing within the space. The ﬂowers, delivered daily to the gallery and changed around in the space, emphasise the constant ‘liveness’ of this exhibition. Constantly shifting, every time you enter there is something new – ranging from the big to the miniscule. The show in general invites many individuals and groups to perform, give lectures, or hold conversations. We wanted to use the Lethaby as a hub for learning and sharing ideas – a new mode of using the space in a way that speaks to everybody. 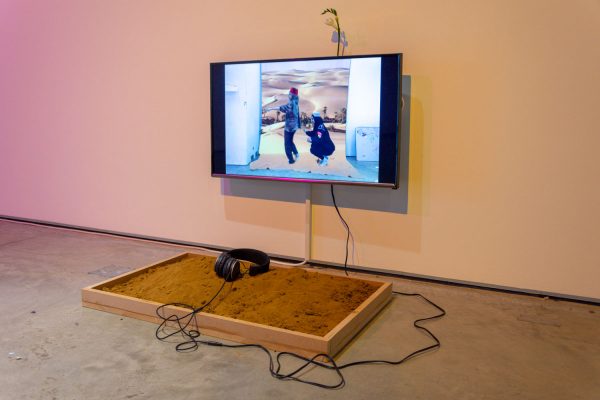 As you enter the space, on the right-hand wall, you are greeted by an intimate video of myself and Maria Mahfooz performing in Dad Dancing. What I love about this work is that it immediately engages the viewer and really sets the tone for the show. During the run of the exhibition, I have watched audiences sit down and become mesmerised by these performing ﬁgures – entertained by the cliched signiﬁers of ethnic identity. The work formulates an enmeshed identity with two British Pakistani women dancing to Arabic music in front of an undisclosed sand background. 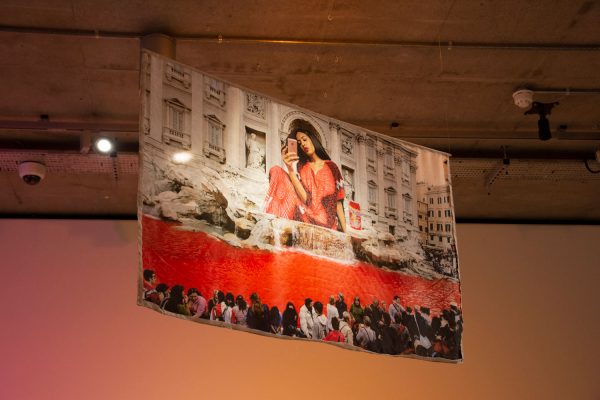 Lit with a glowing spotlight, Zeinab Saleh’s piece Trevi Fountain looms over the gallery, visible from all positions. What is great about this piece is how she uses her own image, as a Somali woman, to subvert power and place herself in a position of dominance. For me, this emphasises the undertone of the show as a whole. Of all the resident artists only two are male, the rest are all women – many of whom are women of colour. As with Saleh’s piece, most of these works demonstrate female artists using their own image unapologetically, taking ownership of their bodies. The exhibition is about much more than narratives of identity, but they still exist. 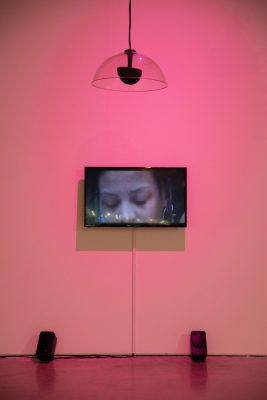 In devising a show that does not limit itself or the artists involved, nor allows itself to be used as a tick box or exploited, music and performance became an important tool to keep the space active and alive while also challenging the notion of “artwork” in itself. Amina Osmanu’s music video tell me plays with this notion of performance and music video as artwork, as her own song ﬂows throughout the space. The piece is composed of personal and found imagery, and can shift to exist both within the gallery and on an online platform like YouTube. Her work operates on the ﬂuidity of terminology such as ‘artist’ and ‘curator.’ Just as Sam and myself consider ourselves as artists and this exhibition to be a piece of work, Osmanu, who has not undertaken any formal art education, has created a music video which functions as an artwork. 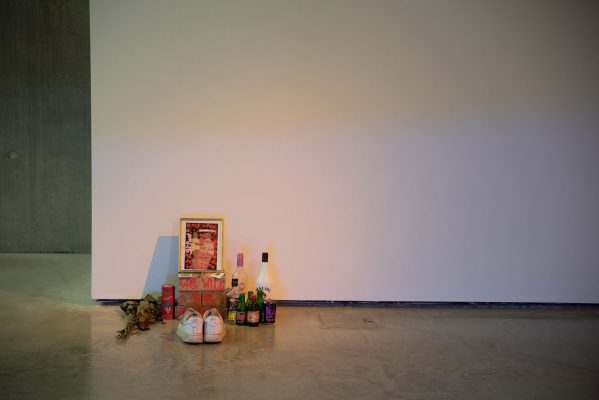 Abondance Matanda has created a work for the show which directly responded to notion of the archive, as she has collated objects which essentially acts as a shrine of herself. I see a similarity between this work and Osmanu’s as it is a physical manifestation of found and personal objects which come together to tell a story – one that is unconcerned by whether an audience can digest the full context of it, but instead allows them to build potential ideas of her character. 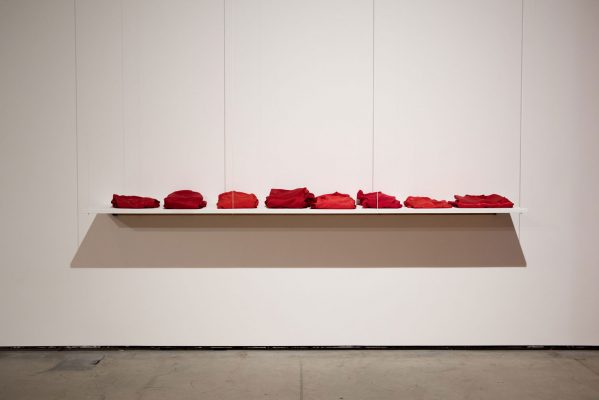 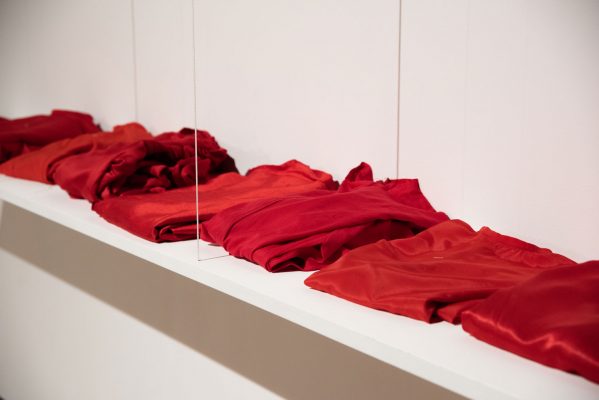 Sandra Poulson’s work 8 + 1 – a shelf of red garments awaiting activation – follows the show’s theme of group dynamics and people interacting with people. What I like most about this is Poulson’s ability to create interventions of her own. For example, during the Private View she instructed people to wear something red – an unacknowledged performance which created a subtle shift in the space. Whether this was recognised as intentional or not is arbitrary; if you entered the space wearing red you were an  unintentional performer or participant in the piece. Work that functions like this, in the background, is key to the aims of New Babylon. 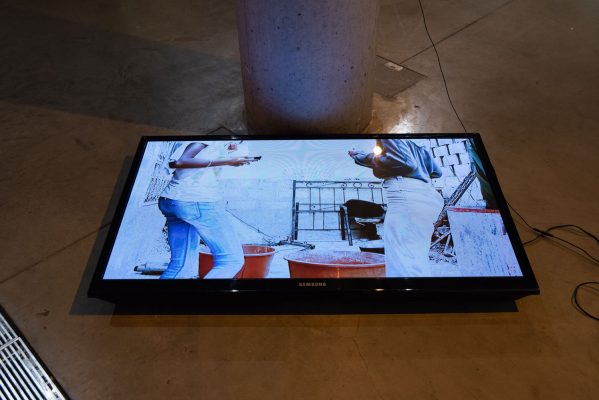 We made the curatorial decision to place Imann Gaye’s monitor on the ﬂoor in order to  offer the viewer a mutual exchange when interacting with the work. As people stand over and watch her dancing with her family and community in Senegal, they are invited to move their bodies and dance with her. It is a moment of sharing. This is so key as Gaye’s work itself is a constant exchange – she sends in new videos every Wednesday, so the piece grows and changes, becoming longer as it progresses. 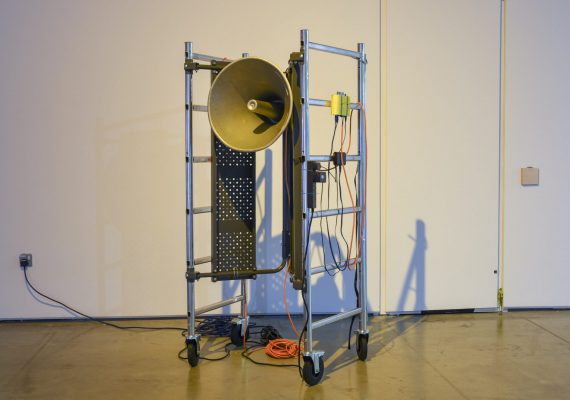 Neal Willis’s sculptural sound work interjects a language of algorithms, detailing the public UAL ﬁnancial statements. For me, this piece is a subtle direct to the institution; it recognises where we are and oﬀers a coded regurgitation this public knowledge back into the space. This self-awareness is integral for myself and Sam as curators as we want it to be clear that we are aware of our position working within this institutional gallery. Moza Almatrooshi’s work is one of my favourites in the show. Similarly to Willis’s work, it deals with political and interpersonal relationships within the institution. Her piece follows her own journey as she attempted to get a palm tree planted in her university. Constantly jumping through bureaucratic hoops, sending emails back and forth, she is eventually unsuccessful. Instead, she presents the tree here in Lethaby Gallery. As students working as curators of this show, Sam and I feel a personal connection to this work as it relays a reality for us working within a large-scale institution – where everything must be agreed by other parties.

One side of the Lethaby Gallery is dominated by wall-to-wall windows. Sam and I decided that this space would function similarly to a stage. With its visibility from all angles, we thought it would be the most eﬀective space for performances to take place. Its fluidity across private and public space allowed for artists to perform to the inside and outside of the gallery, engaging audiences who may not even realise what they are encountering. Alaa Kassim is one of our only resident artists who has stayed throughout the show, performing twice a week. She has an amazing ability to engage an audience, to play with their gaze and make them feel a sense of discomfort. What I love about Kassim is that she is able to perform with or without an audience. This character she embodies is for her own development – she is dedicated to her performance whether there be 1 person or 100 people watching. 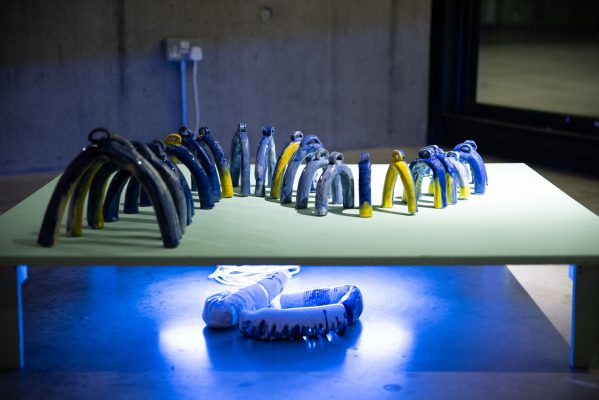 Grace Black’s work is one of the few in the show which elevates the process and importance of making. It demonstrates a relationship between body and materials as she responds to urban landscapes – something that Sam and I were both drawn to. We decided to spotlight this work as we loved the interaction between the light and her ceramic pieces. An important element of mine and Sam’s curatorial partnership was that were guided by feeling. We chose works which we truly loved and felt connected to. For example, although Yili Liu did not originally propose the works we have included in the show, after looking at her archive of pieces, Sam and I fell in love with these two videos and so proposed that she present these. With Rowing in the Desert and Ploughing in the Wave, her actions without reactions create a strong visual opening to the show. These repetitive archives of her impossible journeys are hypnotising, almost resembling moving paintings.

Working together as partners throughout this show, Sam and myself have learnt not only the skill of balancing our creative practice with our role as curators, but also how to work with each other’s visions. We have gained so much from the experience and are incredibly grateful to our team, Central Saint Martins and the Lethaby Gallery for this experience.