At the start of 2018, Central Saint Martins welcomed Priscila Rezende as the second CSM/SESC Performance Artist in Residence.

Based at the college for a month, Rezende shared her work with students and staff as well as joining workshops and crits. Her practice confronts histories of slavery in Brazil, often using her body as a tool within her work, so her time in London offered moments for alternative and international perspectives.

Interested in the public representation of such histories, Rezende travelled to Liverpool to the International Slavery Museum. Her experiences in Brazil is for these histories to be hidden so coming face to face with objects of the slave trade – from shackles and registers to abolitionist material – made a direct impact. “When I see these objects, I don’t remember because I wasn’t there, but it gives me a more realistic sensation about this history. This is very important, because I know what passed for me to be here today”. Researching Britain’s own history, Rezende discovered the murky ways in which British slave traders continued to profit after abolition using worldwide connections (some with Brazil). 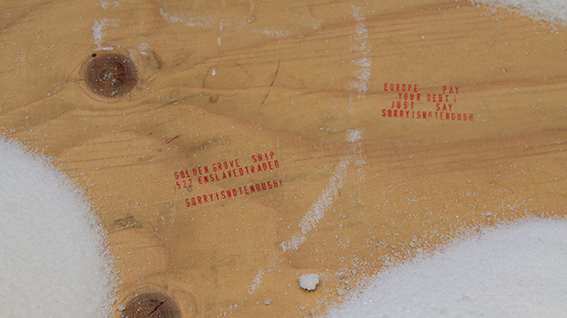 Reflecting on her own practice, Rezende arrived at the college with the beginnings of performance pieces in her head. She settled on sugar as a new material for her work, heavy with symbolism of luxury as well as being a central commodity in the international slave trade. Marking out an area in outside one of the art studios, she began drawing out crosses in sugar. As the crosses built up, the sugar began to form a grid, taking up the entire floor space. “I was thinking in the beginning, to let a line to allow people to pass. People were jumping to keep the grid but slowly they started to destroy it.” Once entirely disturbed, the sugar work was swept away by the artist. 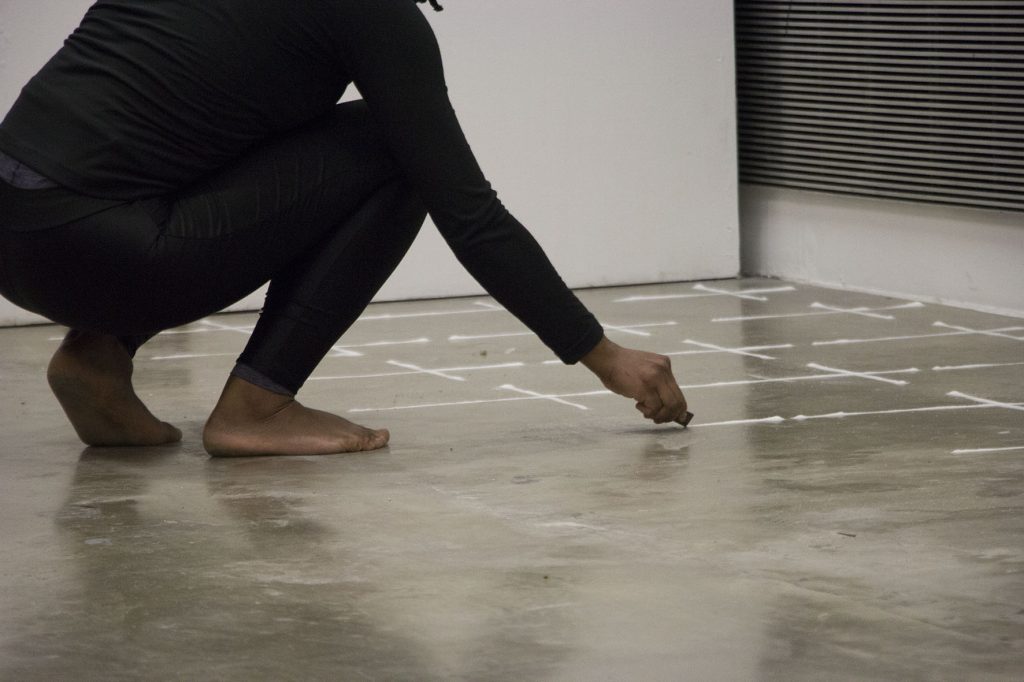 Working with students in the performance lab, Rezende was not only working on her own practice but engaging with students’ own. She presented her work to students on both BA Fine Art and BA Performance: Design and Practice. “It was truly inspirational, the students loved her – so understated and without ego,” recalls Peter Bond, lecturer on BA PDP, “true, committed and dedicated creative practice, elegant, ritualistic, startling.”

The responses from students has been one of the most surprising results for the artist. Their questions resonate in her mind as she prepares to return to Brazil, from what she feels during each performance to whether an international audience can connect to her performance in the same way as a Brazilian one. This is Rezende’s second time working in a country other than Brazil and it enforces her to confront the differences between international audiences. “My work is very particular, it’s about my experiences as a black woman in Brazil. So, would people who aren’t this, could they connect? This conversation was very interesting for me, I could see my work from a different point.” She continues to grapple with these new perspectives: “you need to know the place, and adapt to the situation and your audience.”

The residency is an international collaboration between Central Saint Martins and SESC in Brazil pushing both cross-disciplinary possibility of performance art as well as the potential of cultural exchange. “SESC is committed to social engagement and we cannot be blind to issues like inequality,” says Juliana Braga de Mattos, Visual Arts Advisor, SESC São Paulo, “during the selection process the panel discussed how Brazil and the UK may have different perspectives on slavery but that it was the first global business, all the western world took advantage.’ 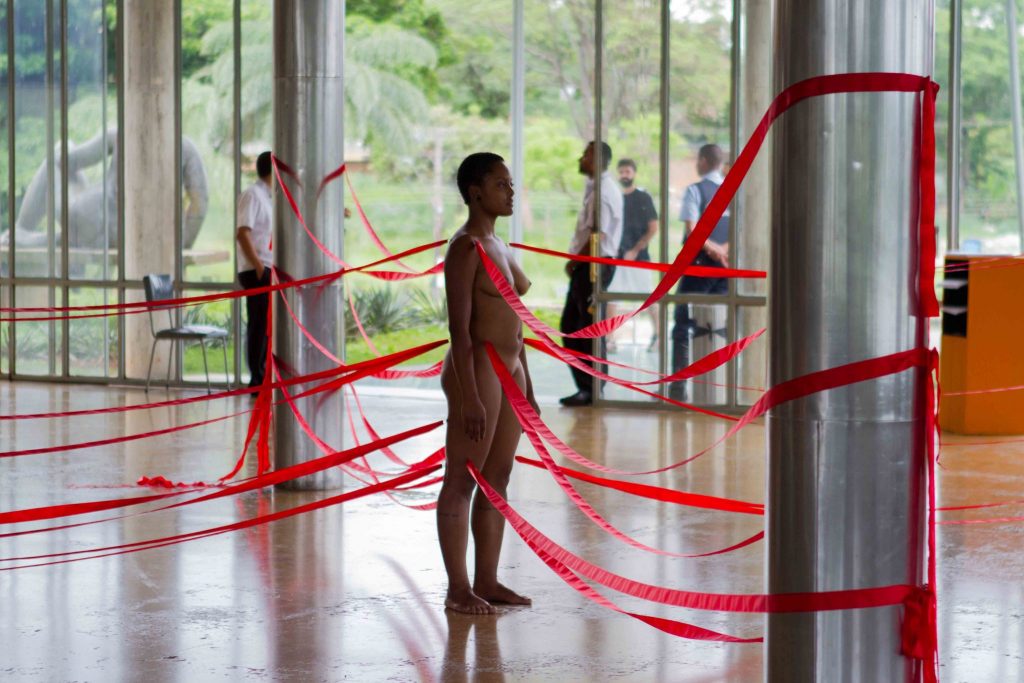 Rezende returns to Brazil to develop new work for a public performance as part of The Plural Perspectives: Performance, Art and Design, a series of events in March run by Central Saint Martins and SESC. One wonders what else she will take from her month in the UK? “I think people in South America see Europe as a paradise. They dream to come here to live, they think it’s a perfect place,” she reflects, “when you come here and you learn the history then you know why it’s so developed in comparison to other places. I now know the reality, not this construct.”

Representing usually unseen history as well as puncturing myth are key for Rezende’s practice: “I faced many things to be here now. Not just personal things, as a Brazilian black woman, and this is very important. In Brazil, we black people we are not encouraged to believe we can do things. Many people think the only things we can do is clean their floors. It’s very significant, if much more people achieve these places, we can show what we can do. I want to show other black young people that they can achieve their goals.”

As the culmination of her residency at Central Saint Martins, Priscila Rezende will be performing publically at SESC 24 de Maio on Saturday 17 March.