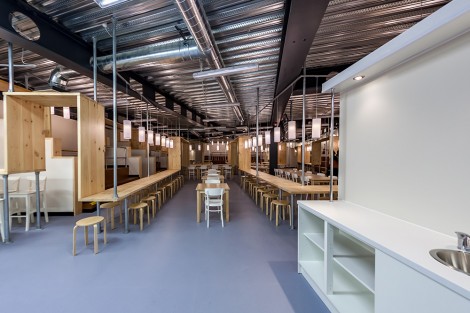 Avondale Construction’s involvement in a large-scale project to develop Bloomberg’s new European headquarters in Cannon Street meant that they needed a temporary canteen facility for the 2000 workers on site.

The traditional modular table and chair units originally proposed were considered too boring, so a brief was set for CSM’s Narrative Environment and Architecture students to create a social, inspiring and sustainable dining space.

The students incorporated the concept of a ‘beam’ inspired by the famous image of construction workers at the top of the RCA building in New York, self service units to limit queuing, and a stepped landscape to maximise the space.

Careful consideration was also given to the furniture and finishes to ensure Bloomberg’s desired ‘exemplary’ experience for the team.

The canteen is now open, and Avondale have a created a fly through of the space so the public can get a glimpse of this innovation without the need for a hard hat. The project has since been shortlisted for the Construction News Specialist Award 2016.