With the Central Saint Martins 'Creative Unions' exhibition now over, we take a closer look at the final themes and works which comprised the show.

There are few daily actions that are not dependent on, or modified by, technology. Our resources are digitised, solutions and distractions are at our fingertips; we are incalculably connected, we watch and are watched. The projects in the Coded Intimacy section of Creative Unions examine our relationship between the remote and the intimate. Analysing what has been subsumed into our everyday routines, the designs in this section playfully reinterpret existing technologies, evaluating how we spend our time, how data and information are used and how our behaviours adapt in relation to invisible, automated forces.

As an extension of their 2018 Degree Show work, BA Graphic Design graduates Irene Albino and Ellen Jonsson presented the performative Histories or Tales of Future Times in the Lethaby Gallery for Creative Unions. Throughout the duration of the show, a knitted manifesto was produced, chapter by chapter – a fairy tale which unravelled idea s and preconceptions of binaries: craft and design, histories and tales, analogue and digital, female and male, zeroes and ones. The hacked knitting machine brought together two stereotypically contrasting, gendered activities (computer hacking: male and knitting: female) – a perfect hybrid of two binary systems to challenge the very notion of binaries. 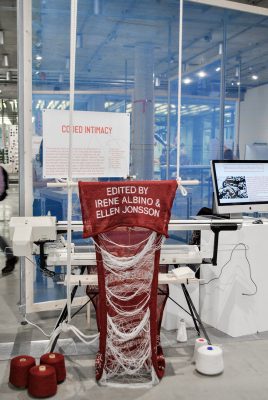 Between 3 and 27 October, the tale was gradually woven, each chapter told from the perspective of a new narrator – from end to beginning. The narrative style is inspired by Giovanni Boccaccio’s Frame story from his series of novellas collectively titled The Decameron, which depends on the literary technique of a story within a story. In Boccaccio’s tale, a group of seven women and three men flee from plague-ridden Florence during the Black Death. In a secluded villa, they spend two weeks telling each other stories – changing storyteller each evening. In a similar technique, Albino and Jonsson change narrator and perspective for each chapter of their knitted narrative. At points, they embraced spontaneous, unpredictable contributions. During Creative Unions, this involved impromptu contributions from a pop up poet and gallery staff.

DAY I
AND ON DAY THE FIRST THE FIRST NARRATOR
SAT BY THE SPINNING YARN
AND THUS BEGUN..

THE PAST KEEPS BECKONING, WITH CROOKED FINGER, FOLLOW ME, AND FOLLOWING I STUMBLE OVER OLD EMOTIONS, BLOCKED IN THOUGHT, OLD HURTS CLOSE IN AND MAKE ME LOSE MY WAY. BUT THIS TIME I HAVE MARKED PAST’S PATH WITH MY LOVE’S PEBBLES. AND AS I TURN, THEY LEAD ME TO TODAY.

LIFE AND SACRIFICE GO TOGETHER. RED IS THE COLOUR OF LIFE AND OF SACRIFICE. 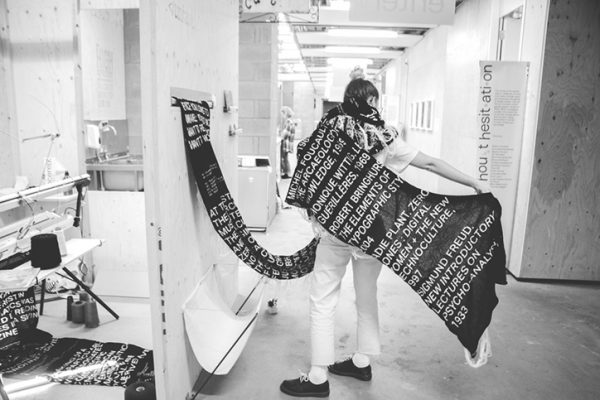 For the performances at Degree Show Two and Creative Unions Albino and Jonsson used an Electroknit Brother 950i from the 1980s – a semi-manual, semi-digital Jacquard loom knitting machine. The project capitalises on the relationship between weaving and coding: “If weaving is a form of coding, we thought how would it be to weave code? In what ways and to what extent can we pursue a mix of old and new technologies?” Invented in 1804, the Jacquard loom is controlled by a number of punched cards – the selection of which creates a continuous, woven pattern. This use of punched cards to control a sequence of operations was an important conceptual precursor to the development of computer programming and data entry. Some early computers received programme instructions from a paper tape punched with holes – a technology that was used in computing until the mid 1980s.

Something is moving
something that shouldn’t move. 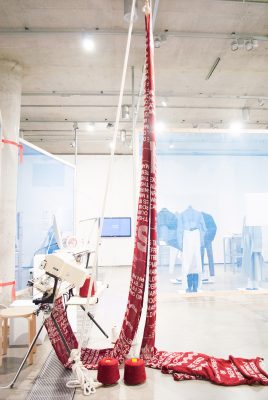 During Creative Unions, Albino and Jonsson’s machine, based on the “binary system par excellence”, produced a knitted manifesto that incorporated writing fragments from Judith Butler, Donna Haraway, Virginia Woolf, Jack Zipes and Marina Warner among others. Across different voices, the narrative parallels gendered tropes with those prevalent in fairytales. The simplification of morality and character is likened to the construction of gender : “The discovery is, of course, that man and woman are fictions, caricatures, cultural constructs. As models they are reductive totalitarian, inappropriate to human becoming. As roles they are static, demeaning to the female, dead-ended for male and female both.” (Dworkin, Andrea, Woman Hating: A Radical Look at Sexuality, 1974)

FAIRY TALES THRIVE ON SIMPLIFICATION. A DECISION IS RIGHT OR WRONG. ONE TURNS TO THE LEFT OR TO THE RIGHT. 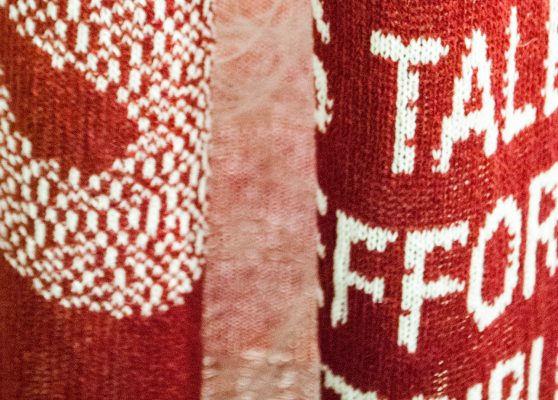 Albino and Jonsson’s resulting knitted manifesto can now be seen on view as part of group exhibition Corrrective in the College’s Window Galleries. Corrrective is a design collective of seven recent Central Saint Martins graduates whose practices subvert that which is oppressive and challenge and disrupt what is seen as the norm. Armed with a mindset that lies at the intersection of feminism and queerness, they individually explore topics such as gender binaries, queer politics, decolonisation and their representation within the mainstream. Through a multidisciplinary approach, they aim to come together as a force for change.

You can also see the first knitted iteration of at Ruskin Gallery as part of group exhibition Decriminalising Ornament:The Pleasures of Pattern until 21 November.