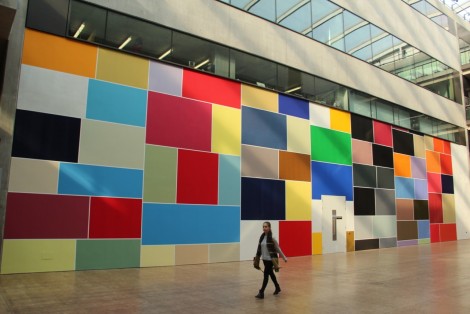 Earlier this year BA Fine Art student Matthew Wang was announced as the winner of the Big White Wall competition for his bold, block colour proposal examining the representation of colour in technology.  With the official launch of the complete project taking place tonight, we spoke to Matthew about the challenges of working on such a large scale, the inspiration behind his winning proposal and his interest in the relationship between art and technology.

What initially inspired you to get involved with the Big White Wall project?

I had originally worked on a similar set of images on smaller scale prints but, with some guidance from my tutors, I had wanted to scale them up for some time. When the opportunity for the Big White Wall arose I thought I would give it a shot.

I first noticed the grid-like pattern that search engines, such as Google use, while on a trip overseas. I later realised that Google filters pixel information from images and represents them as single colours. Drawing from this, I put together a map-like arrangement of the blocks of colours from Google image searches of different geographies around the world.

How did you get to the final colours for each region?

I took a series of images from Google’s top search results. The grids and colours had a peculiar aesthetic about them which I found enjoyable. The evolving nature of a Google search results means that this specific arrangement of colours or images is unlikely to occur again which makes it dynamic. 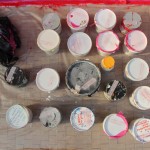 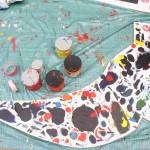 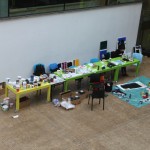 Your BWW project places focus on technology’s relationship with colour and art, is this something that normally influences your work?

I grew up at a time when there was an explosion of computing and imaging technology; the internet, smart phones, high-end photography. I suppose using digital technologies feels quite ‘natural’ to me, and probably does for most others in developed economies. It’s difficult not to be exposed to some form of digital interface on a day to day basis, Some of my work begins to explore and critique our odd relationship to these technologies; the blurring line between the virtual and the ‘real’, our physical and psychological dependence and attachment to our digital tools.

Have you enjoyed working on such a large scale?

Immensely. It’s really rare to have an opportunity to work on this scale. There were many unforeseen challenges when realising the work and it demanded a lot of time. In the end it was worth it. 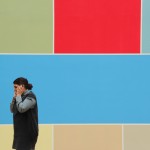 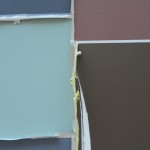 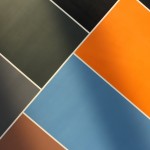 Do you normally work on large pieces/has this motivated you to start working on bigger scale projects?

I have not worked on large pieces before, mostly due to cost and space constraints. A piece really takes on a different meaning when scaled this way. This project has given me enough confidence to try out larger scale works more regularly.

Tell us a bit more about your practice in general.

I work with many different mediums, video, photography, performance, virtual reality, walking, and now, painting. I’d like to think my work is site-specific and socially engaged in some way. I often use different cities as a resource for my work – walking around them, mapping them and getting lost in them. I harness the experiences I have to reflect on and critique my life and my work.

Do you think this project has developed the way you approach your work?

It has definitely opened up a new way of working which I would not have envisaged normally. I’ve worked with a new medium and learnt a lot more about paints and surfaces. The feedback that I’ve received during this project spills over to my other works too. 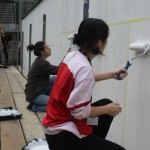 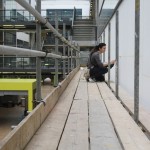 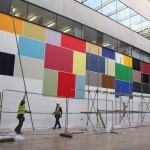 What have been the highlights of this project for you and what were the biggest challenges you faced?

The highlight for me was seeing the absolute dedication that my friends put into the project. I’ve not met a more committed and wonderful bunch. The project was a lot more fun with their help and energy. The biggest challenge faced was being able to develop an efficient system of working that made use of all the resources we had in the shortest time possible. It became easier as the project went along, but there were many sleepless nights.

Do you have any other projects coming up?

On this scale, not that I know of. I hope to be able to work on such a project again, but it really depends if a space opens up somewhere. I have some paint left over from the project, so I might try to experiment with that. I’d love to do something performative in the city somewhere involving the public.

Please note that this project is open to UAL staff and students only.
This project was supported by Cass Art and Liquitex.