Last December, a group of twenty MA Art & Science students visited CERN in Switzerland. While on the trip, the students came up with the idea of Entangled, a group exhibition inspired by their experiences and a deeper understanding of what goes on at the world-renowned physics institution.

We spoke to Lisa Pettibone, one of the students involved, about the trip, the forthcoming exhibition and follow-up visit this May, and the challenges of working with an intangible subject.

Tell us a bit about what happened during your initial trip to CERN.

They gave us a very thorough tour of the place, as well as lectures – various scientists made presentations about some of the work they’re doing at CERN with a focus on CMS the largest particle detector experiment in the complex. They covered the hot topics like the discovery of the Higgs Boson particle, how data was collected for it and the incredible amount of collisions recorded before they finally decided that they had found it.

We were involved in an experiment in an old lab (many date back to the 60s) where we played around with a cloud chamber that traps cosmic rays. We built a quite crude little box device using alcohol and noted the changes in the vapour. We started to understand what scientists go through when they’re experimenting and how carefully they have to communicate the results.

We were really excited about the whole thing. You’re sitting in the canteen with a whole mix of people from around the world and you can easily start talking to an engineer or a physicist. It felt like a small community and there is a kind of high-intensity vibe about it. 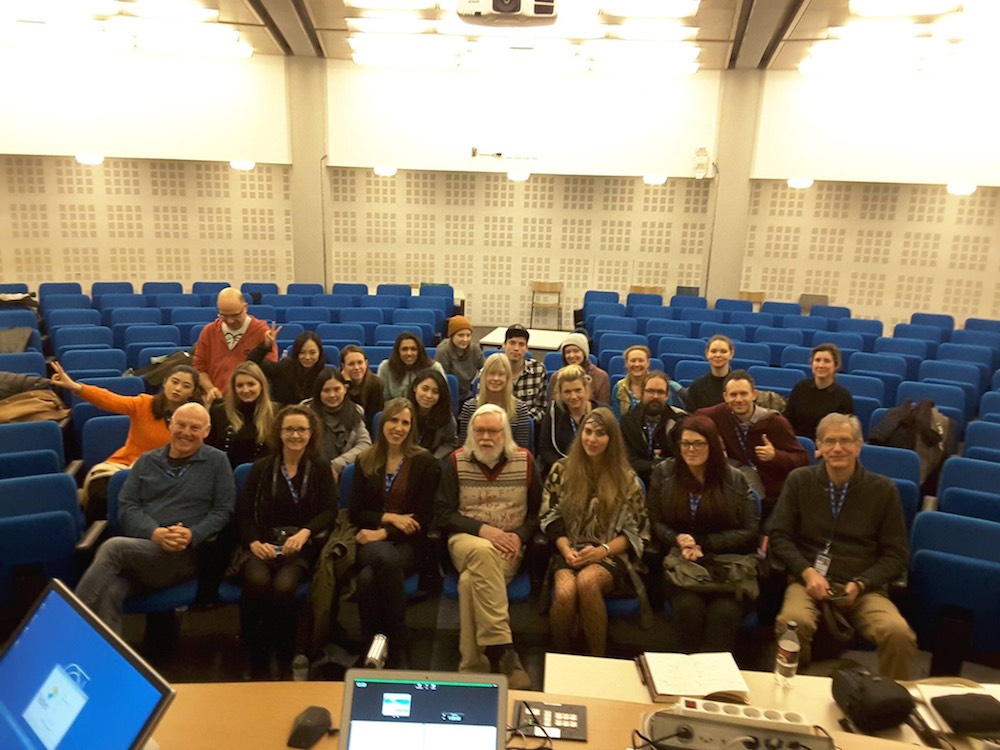 The crowning experience was seeing the Compact Muon Solenoid Experiment (CMS), which is part of the Large Hadron Collider. We were very lucky that the whole assembly was actually open for viewing with covers on the delicate end caps. It’s been well photographed, showing the beautiful mosaic-like pattern to sensor material arranged in a circle. It looks like a rosette window from Chartres Cathedral. It was a privilege to get in there and see it as a group.

We drove out into the countryside to get there and were surprised at how deep it is. The experiment is 100 feet in the ground, and you get very close to it on a mid-level platform. Our guides were very generous and enthusiastic, keen to hear what artists had to say, how we reacted. They laughed at what we were photographing – very different things to what  scientists usually consider.

So how did the trip lead into an exhibition?

They invited us to come up with proposals to continue the relationship. We thought  the best thing to do was to propose an exhibition that would start at Central Saint Martins in the UK and then some of it could go to CERN. We invited them to come for the private view and they’re sending someone over, which is great. There’ll be 19 students who went over to CERN exhibiting their work, and also one of the tutors, Andy Charalambous, who guided us on the visit. 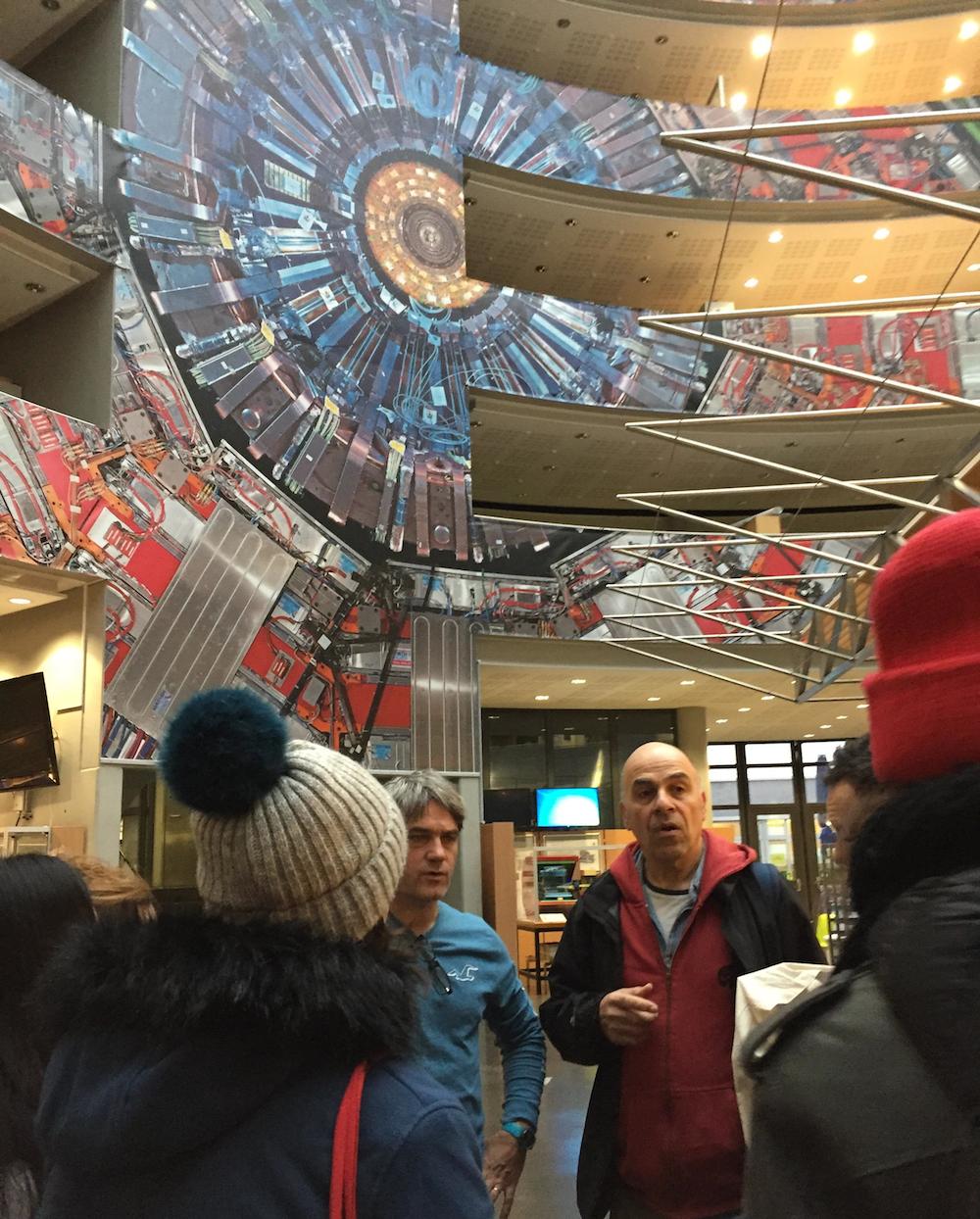 Where does the titled Entangled come from?

Central Saint Martins initials are very close to the name of the detector, CMS. When writing, we were all making mistakes by transposing the letters, and we thought it was quite funny. But also the name comes from the fact that we feel like we have been caught up in something. When looking at graphics that were produced based on particle collisions, they look like a big bottlebrush with lines shooting in different directions. It looks tangled up.

What sort of research are you doing?

Andy is taking a group of us to Imperial College to talk with scientists there. All of us are researching our own projects but some of us would like to go back to CERN and research further areas that have caught our imagination. I’m interested in the silicon wafers, which line the detectors and help them plot out the trajectories of the particles flying through and penetrating the walls of the experiment. I have a background in glass sculpture, and silicon wafers are a glass-like material, they polish to a mirror-like surface and have extremely sensitive, superconductive properties.

There were a lot of things we couldn’t see that we had to imagine in our mind’s eye. We didn’t see particles scattering during a reaction when we went to see the CMS detector. So you spend time looking at these enormous bits of machinery and locations with a very active imagination, trying to visualise what’s going on inside. The scale of everything makes it exciting, it’s vast, the biggest circular tunnel that throws the particles around at incredibly high speeds is 10km across. The whole site is miles and miles across. It overlaps parts of France. 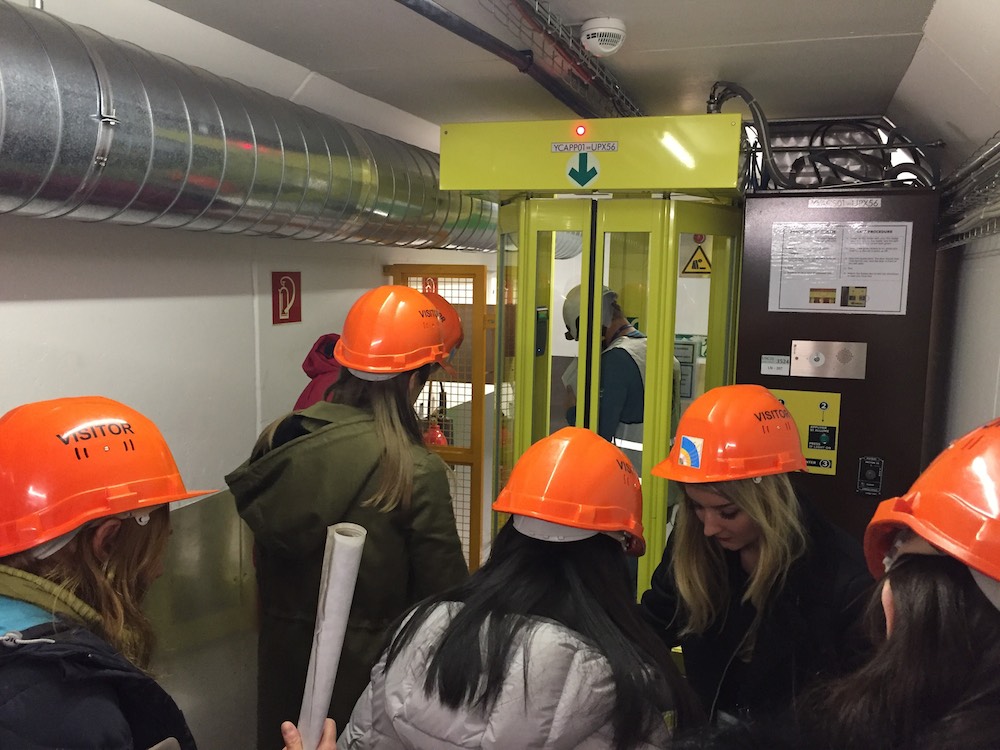 Is that difficult as an artist, to work with some something on a huge scale, and also things that you can’t see?

In some ways you become more philosophical about what you’re looking at. Scale is a huge issue both for scientists and the public trying to imagine what they’re doing.

The kind of scale scientists work on is so miniscule, yet they refer to it as discovering how the whole universe started

Physicists think in scales that are so small even the strongest microscope can’t see the particle. For us, there was a lot of conceptualising, a feeling of wanting to grasp scale and what that means for us as humans, because we seem to exist in one format here on earth and yet there are other formats that are so much smaller and bigger than us. It is a real challenge, but mentally and visually really exciting at the same time.

What do you hope people will take from the exhibition?

Hopefully people will understand more how these big concepts impact our world. I think CERN is struggling to get the message out that this is crucial, valid work and in spite of how much it costs to fund it, it’s incredibly worthy work. These are difficult concepts to get your head around, so watching how other people respond to complex science can open up ways of communicating with the public.