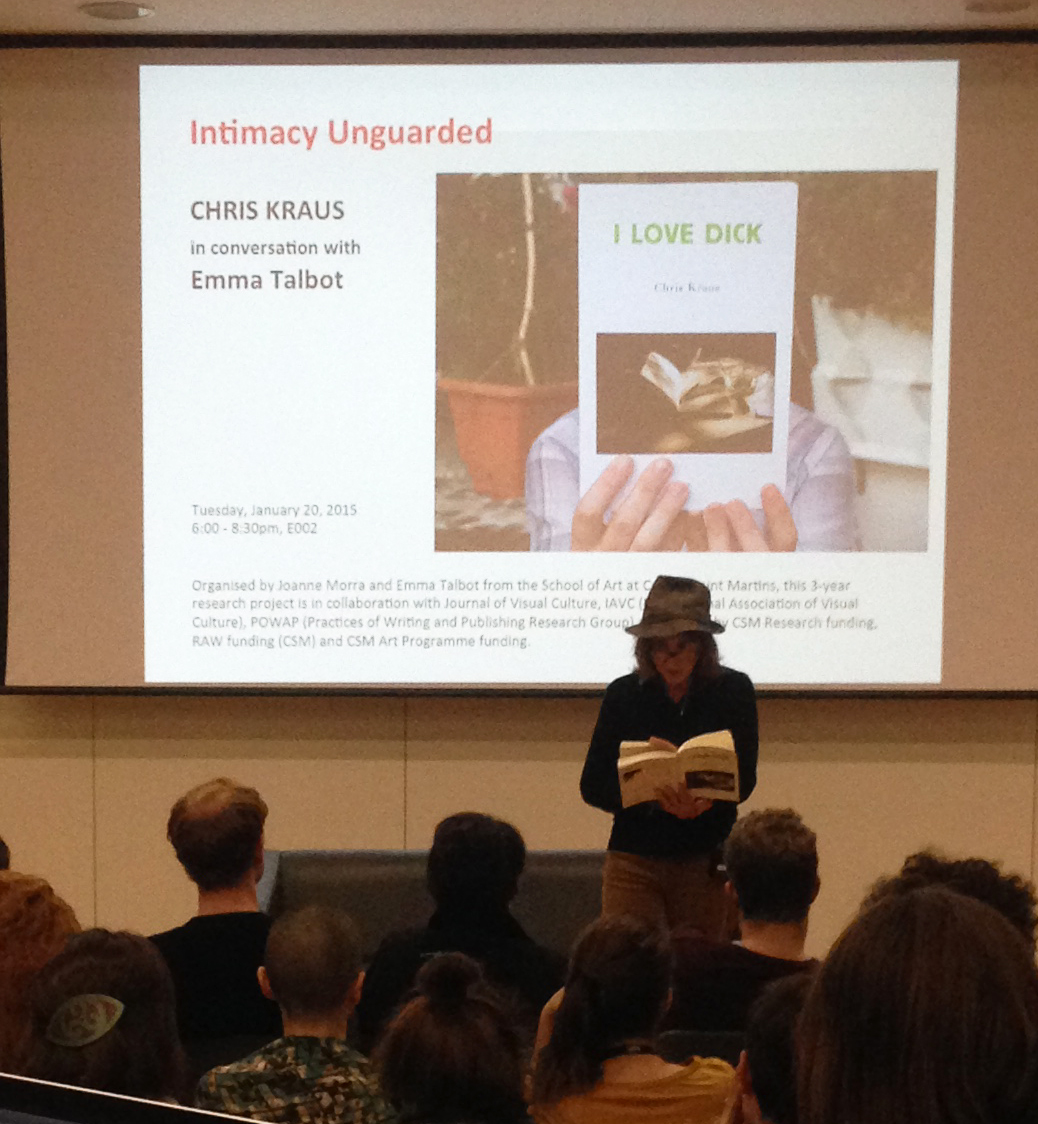 Described by the New York Observer as ‘the art world’s favourite fiction writer’, Chris Kraus did a reading of I Love Dick followed by a Q&A session with Emma Talbot, as a part of the three-year research project Intimacy Unguarded.

Chris Kraus is the US author whose work interweaves her own life experiences within a framework of critical thinking, referencing artists and artwork, theory and philosophy. Noting that this was the first public reading of the book in ten years, Kraus began the evening with a reading from I Love Dick. The book’s focus is a love affair between the characters Chris, her husband Sylvèré and Dick a cultural critic, portrayed through a series of letters written from Chris to Dick.

After the reading, delivered in a strong American accent, BA Fine Art tutor Emma Talbot joined Kraus for a series of intimate questions. Talbot began by addressing Kraus’ personal style of writing and asked how she draws on and uses her own life as writing material. Kraus’ response was simple and modest, describing herself as not having a particularly good imagination and thus relying on events from her own life for inspiration in her writing. Talbot then asked several questions specifically about I Love Dick. Kraus discussed the letter writing style used throughout the book and spoke of how this format allowed her to express the energy of the relationships within the book, and how the nature of having an addressee gave more purpose to her writing. Based on cultural critic Dick Hebdige, Kraus, through witty anecdotes, argued that the character of Dick provided the basis for a lot of the publicity surrounding the book.

In response to a question about her writing as an artwork, Kraus argued that in general writing has become more of a visual art with fiction becoming much more conceptual in the last five to ten years. She then spoke about politics and specifically the impact of gentrification and suggested that artists must learn to operate within the changing social states caused by factors such as gentrification. To deny any adaptation to these changes, Kraus believes, would be childish.

Kraus discussed the liberating nature of failure. Having publicly labeled her own experimentation in film as a failure, she argued that this allowed her to redirect her energy into more positive work. For Kraus, this was a return to writing and a step away from film.

Then there were questions from the audience. Topics included Kraus’ work in film and whether she believed that there is still a place for experimental film in the art world, and whether she had any advice for artists facing difficulties as a result of gentrification, a question that provoked some debate between members of the audience.

Finally, one audience member, referring to Kraus’ initial explanation of her work, asked how she defined the term ‘imagination’. To this Kraus replied that for her imagination was “entirely made up fiction”, a style of writing which she described as leaving her feeling totally alienated. For Kraus, as seen clearly through her own work, a more personal, real life approach to writing is essential.

– Further information on the works of Chris Kraus