In 2017, Tokyo Institute of Technology (Tokyo Tech) invited three Central Saint Martins academics to each undertake a month-long teaching or research residency, in continuation of an institutional dialogue concerning the arbitrary borders between art, design, science and technology.Over the course of the last academic year, Ulrike Oberlack, Betti Marenko and Heather Barnett have visited Tokyo Tech, spending four weeks attached to Professor Kayoko Nohara’s laboratory in the Department of Transdisciplinary Science and Engineering. Heather Barnett is an artist, researcher and educator working at the intersections of art, science and technology. She is also Pathway Leader for MA Art and Science at Central Saint Martins. Here, she reports on her time in Tokyo and her work with “intelligent” organisms.

I was the last of the Central Saint Martins trio to arrive in Tokyo. My arrival in March overlapped with Betti Marenko’s departure by a day, so she was able to update me on her experiences and pass the baton on project development. While the residency was largely speculative in terms of scoping out possible future collaborations, the immediate priority was to progress the “wearables” project instigated in Ulrike Oberlack’s residency, which was already in receipt of funding and had a more pressing timeline.

The groundwork laid down by Ullrike’s workshops and Betti’s lectures was easy to pick up with my own interests in exploring the interconnections between biological, social and technological systems. Ulrike had worked with light-emitting properties to explore a wearable technology. This used design-thinking to explore not only the technological possibilities, but also what social and cultural function such “wearables” might have in the context of Tokyo living. Betti’s lecture series had explored design-thinking from a philosophical basis, encouraging students and researchers to consider nonhuman perspectives and human to machine interfaces.

My own interests as an artist, and as an educator, centre around nonhuman intelligence, collective behaviour and different knowledge systems across species and scales. For many years I have worked with “intelligent” organisms – from slime moulds to humans, using a range of artistic research methods to creatively and critically examine our notions of sentience and what constitutes a body of knowledge. In practice, this has involved working with living materials but also employing natural systems as conceptual models for exploratory experimentation. Whatever the media, my works aims to create the conditions for interesting behaviours to emerge, rather than pre-defined outcomes. I took the same approach with the Tokyo residency – to provide a framework, within which ideas could emerge and evolve. 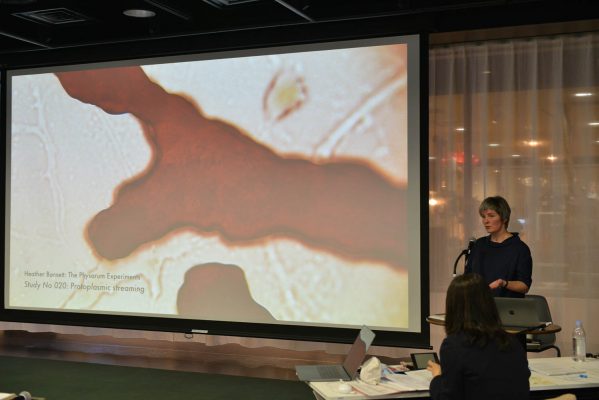 My time in Tokyo coincided with an academic break so, instead of teaching a course within the university setting, I ran a number of public events: talks, workshops and research visits which were open to students and non-students alike. The first session took place in Hikarie, a large shopping centre and cultural venue in the busy Shibuya district. Faculty, students, and professionals from different backgrounds were invited to participate, and were also joined by passers-by who were curious to see what was happening. Some of the people who stumbled on the event stayed with the project and attended further sessions later on.

The session explored how I work, as an artist, with living systems and the methods I use to pose questions and engage audiences. I also shared some of the strategies used for bringing people from different disciplines together to exchange knowledge and collectively explore subjects. My talk was followed by a creative-thinking workshop linked to the “wearables” project – a way to open up the possibilities of what the device could be, how it could function and where it might be worn. The exercise – a variation on an exercise I do with my students on MA Art and Science to encourage thinking through making – here acted as a thought experiment, playing with randomly selected variables to generate ideas. From lists of ‘biological systems’, ‘communication devices’ and ‘parts of the body’, a roll of the dice decided which items were selected, with which groups had to create ideas for a wearable device. For example, one forced combination connected a parasite with a fax machine and a finger nail. With such absurd parameters set by the throw of a dice, participants were playful and imaginative in their approach. Many wonderful speculations were created thinking about how a communication system could be used on and with the body. 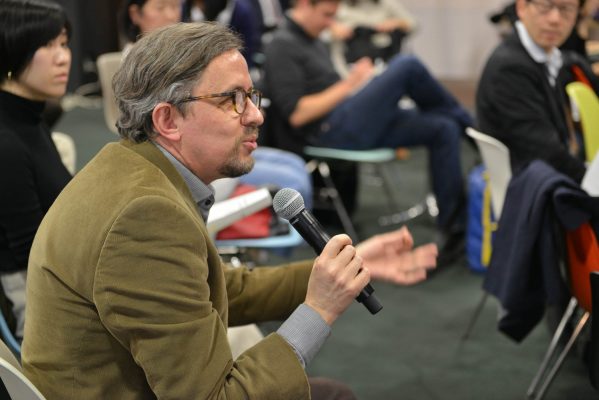 The second workshop involved a smaller group to develop ideas further. Here we were thinking about the city as a living system, relating it to the signalling mechanisms in organisms such as cuttlefish, which possess a complex array of light-emitting and pattern-forming chromatophores to send messages. We brainstormed ideas, thinking about the purpose of the speculative wearable and what would be communicated, to whom. Small groups sketched out ideas and then passed onto the next group to adopt and adapt. 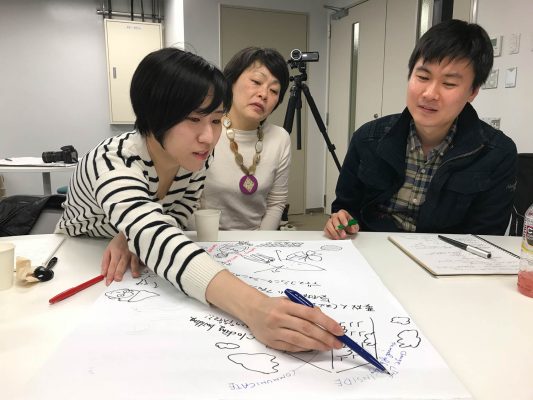 On another day we took a small group to the Aquarium in Shinagawa on an informal research trip. The aim was to explore a different environment and to find stimulus from the creatures we encountered there. We were looking specifically for organisms which emit light or use some form of signaling to communicate. We were mesmerised by Jellyfish Ramble and spent a long time observing and sketching – the longer we looked the more we noticed as behaviours began to reveal themselves. In one species we observed a cascade of flickering lights transmitting along its translucent body. The point of the exercise was to slow down, to take notice, to find inspiration and to relate what we observed to the project. 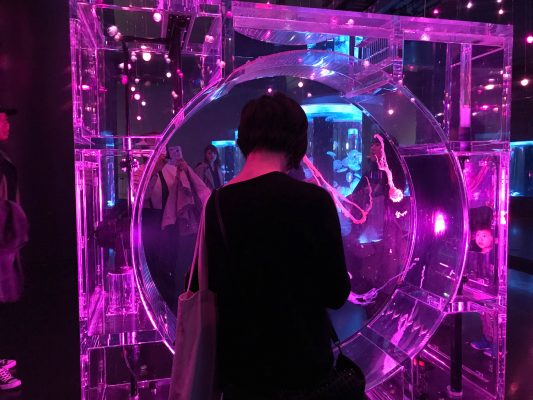 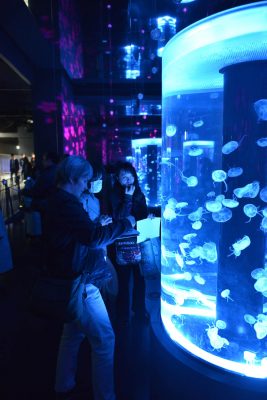 The next phase of the “wearables” project is to translate the research conducted and many ideas generated into physical form in the development of prototypes and public experimentation. We are currently planning some more intensive workshops which will take place over the summer months to start building prototypes which put our ideas into practice. The aim is to bring together a diverse group with different expertise across science and technology disciplines together with artists and designers.

Like Betti and Ulrike before me, I too met with incredible researchers at Tokyo Tech working in robotics, artificial heart systems, and synthetic biology, translating biological mechanisms to human health or social issues. Of particular note was the work of Professor Kurayabashi who, amongst other biorobotics projects, is developing systems which utilise the pheromone receptors of moths. Working directly with the organism’s neurocircuitry, rather than an algorithm modelled from biological observation, his lab is developing the potential for aerial swarm robots with a highly attuned sense of smell. Professor Shigeki Saito also shared his research in two distinct areas of enquiry: the mechanical engineering of an artificial gecko’s foot, creating electromagnetic adhesion at micro scale, and research into creative thinking in engineering design and the influence of diverse and non-diverse groups – which aligned well with my own interests in inter and trandisciplinary learning.

I was also impressed with the work of Professor Hijikata, who is developing a self-powered pace maker. The idea is to use a reflex muscle twitch within the body to trigger the pacemaker and generate enough power to send another trigger to the muscle, creating an internal feedback loop between body and machine. The human-centred design of the Takeda lab was also finely tuned to improving lives and responsive to the specific environment context of Japan, most notably the innovative design of human/robot interfaces which could act to effectively respond to natural disasters such as clearing rubble after an earthquake. All research areas were striking in the potential to transform lives, and with great potential to feed into current and future collaborative interdisciplinary projects. 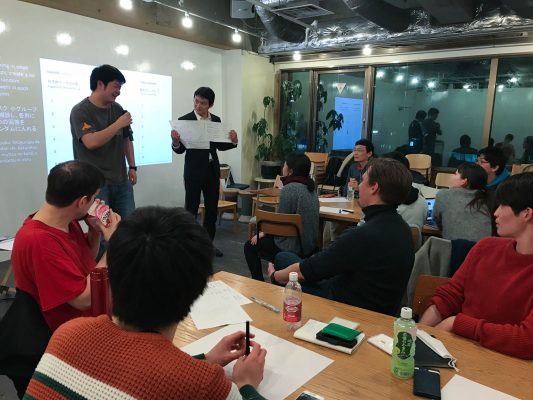 My time spent in Tokyo was hugely stimulating and rewarding, with much groundwork established for the next phase of the project. The team will return to Tokyo over the summer to translate ideas into physical form and prepare for a public event to take place in September, back in Hikarie where I started.