In 2017, Tokyo Institute of Technology (Tokyo Tech) invited three Central Saint Martins academics to each undertake a month-long teaching or research residency, in continuation of an institutional dialogue concerning the arbitrary borders between art, design, science and technology.  Over the course of the last academic year, Ulrike Oberlack, Betti Marenko and Heather Barnett have visited Tokyo Tech, spending four weeks attached to Professor Kayoko Nohara’s laboratory in the Department of Transdisciplinary Science and Engineering. Design theorist and educator Betti Marenko is Contextual Studies Leader on the Central Saint Martins BA Product Design course. Here, she reports on her time in Tokyo and her series of talks on the “encounter”, the virtual and the nonhuman.

When Professor Nohara invited me to teach a four-week elective course at Tokyo Tech I was delighted. I immediately set out designing a series of talks based on my current research, which looks at the impact of technology on the human in contemporary society. In Tokyo, the course attracted a diverse range of graduate and postgraduate students – not only from design; human-computer interaction and programming disciplines but also material technology; chemical science and metallurgical, electrical and nuclear engineering. My overall objective was to encourage a contextualisation and critique of established notions of technology – in planetary computation and, more broadly, the Anthropocene.

The talks drew on philosophy, design theory and critical perspectives on technology in order to investigate design’s role in shaping post-Anthropocene futures. Over the course of the four weeks, we looked at debates concerning the human, the post-human and the nonhuman; we unpacked some of the narratives around the encounter between the human and the machine using historical examples of eighteenth-century automata. We looked at how digital technologies can become a contemporary form of enchantment and how the algorithm has become a cultural and technical object, rooted in the collective imagination. We worked with design research methods and speculative strategies that can be deployed to build desirable futures, analysing case studies in critical and interaction design. 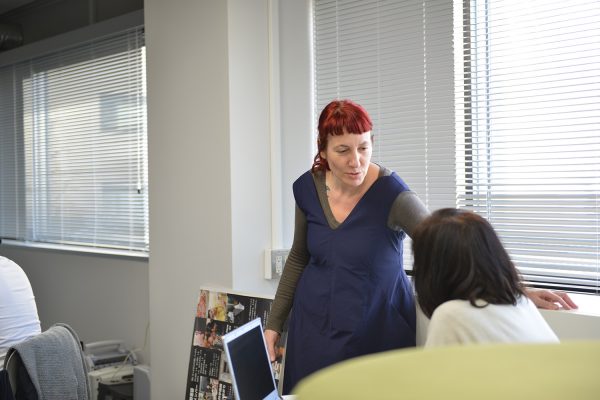 When devising the course, my original, key question for the students was: What does it mean to be human in a world of machines designed to be smart? But, another, equally pressing question emerged which provoked lively discussion among the students: How can design be part of a critique that questions prevailing views of technology? Although the students came from a variety of disciplines, there was a unifying theme in their conclusions about the relationship between human and technology: “By studying the human itself, we can think about the relationship between humans and technology. Then I think product design will be better.” Similarly, another student said, “After the course, I learnt that when we create technologies for people, we need to understand people first, then think at how we can develop technologies. HCI researchers often think about what is technologically possible, then consider the potential users of their devices. This order should be reversed for more successful devices.”

During the final workshops, designed to encourage reflection and self-evaluation, the students discussed in groups how the issues presented in the course might impact on their subject discipline. For most, it had been their first encounter with cultural and philosophical themes in a context-led approach assessment of the role of technologies in society. But it was also a first for me – teaching a group of non-design students was particularly illuminating as it brought to the fore the importance of developing a space of dialogue between humanities, science and technology. I was therefore thrilled when Professor Nohara asked me to discuss the notion of the “encounter” in the more intimate and informal set-up of a Café Philosophique – a grassroots forum for philosophical discussion – which was open to staff and students. 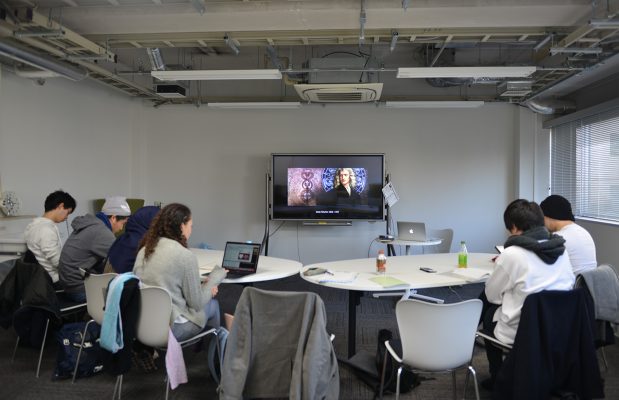 Initially, the idea was to have an informal conversation around the subject of Tokyo 2020. As Tokyo prepares to host the Olympics and to welcome a great number of visitors, it seemed timely to think creatively about the notion of “encounters”, to discuss the challenges and opportunities brought by different people, ideas, cultures, lifestyles, and worldviews coming together. The brief reflections I offered therefore centred on the horizon of potential that every encounter discloses, and on how every encounter with an “other” shapes our own sense of identity and belonging. To provoke discussion, I shared images and metaphors inspired by skin, bodies, and touch. My approach was informed by a view of philosophy as a transformative toolkit that everyone can use to create new images, narratives and thoughts about the world we live in and the world we want to live in. How does change happen? How is the future made? These are pertinent questions to ask, even more so to audiences of designers, technologists, engineers and scientists actively engaged in shaping the world. The discussion that ensued during the Café Philosophique was in itself a marvellous encounter, showing the difference and rich potential of both Western and Japanese philosophies. The idea of the “void”, for instance, emerged as a counterpoint to my “encounter” – as a powerful image of something that simply refuses any binary categorisation and that culturally shapes the encounter with “otherness” in profoundly different ways.

And, of course, many remarkable encounters took place during my stay, graciously organised by Professor Nohara. Professor Shinjiro Kanae, School of Environment and Society, shared his work on climate change and meteorology using modelling prediction and his state of the art research on water shortage across the world. Professor Minoru Nakayama, Learning Media Technology Department, talked about his work on AI and visual perception, which uses eye-tracking to evaluate and measure human behaviors, and Professor Wataru Hijikata, Department of Mechanical Engineering, took us through an impeccably prepared hands-on demonstration of his research and prototyping on interactive wearable and artificial heart design – he even introduced us to the resident frog in his lab. 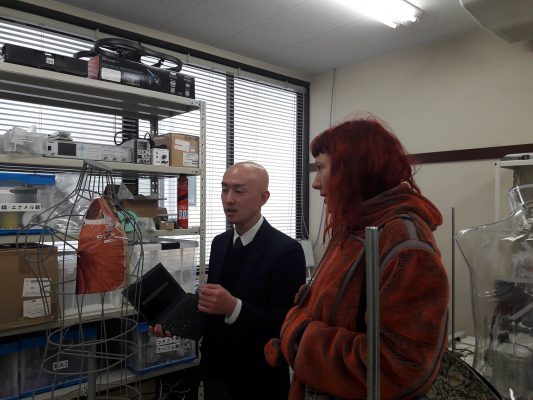 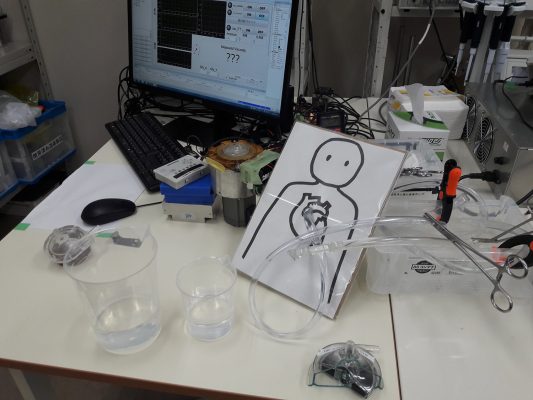 Not only were these meetings a wonderful opportunity to share ideas across disciplines, they were also thought-provoking, enriching and special encounters which planted seeds for future collaboration. I would also like to give a special mention to Professor Michael Norton, a scholar in sustainable development and environmental studies, who gave me the best tips on how to navigate my life and my teaching in Tokyo, and Hiroshi Tsuda, Director of the Creative Flow programme in the Arts & Science Lab, who gently guided me on a beginner’s path to Japanese philosophy. I left Tokyo a different person from when I arrived, with a change in my own perspectives and new views to experiment with – for this I am grateful to you all.