The Big White Wall project has returned to The Street for the third year running and this year the winning proposal ‘Cross Hatching’ sees BA Textile Design and MA Culture, Criticism and Curation students collaborate to celebrate the work of Eduardo Paolozzi.

“Taking Eduardo Paolozzi’s wallpaper design collaboration with Nigel Henderson in the 1950s as a point of departure, the BA Textile Design and MA Culture, Criticism and Curation teams have come up with a genuinely collective work.” – Mark Dunhill 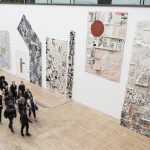 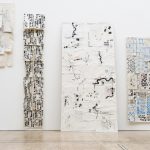 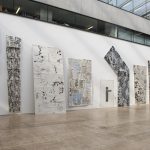 MA Culture, Criticism and Curation alum, Rosie Ram talked to the students about her research into Paolozzi’s time in the Textiles department at the Central School during the 1950s which manifested itself in an exhibition celebrating the artist’s work in our Museum and Study Collection’s Window Gallery. 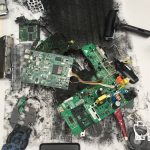 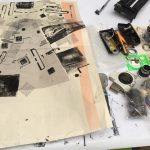 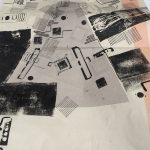 Speaking to project sponsor Cass Art, BA Textile Design student Lucy Macdonald noted the benefits of collaborating on a project of this scale,

“Working to such a large scale was certainly daunting to begin with. We knew that it would be a real challenge to cover a wall of that size, however we discovered that it was manageable. Because it was a collaborative project, and all of the technology and mediums we were working with became part of a shared economy, there was no sense of individual ownership over the work.”

In addition to the installation, the students took part in a workshop with artist Amy Dickson. Turning the project on its head, this workshop saw the students use traditional analogue techniques and tools to create a digital film. Here the students experimented with discarded film, stitching and drawing directly onto it and then digitising the film, giving it a new life.

This year, on Saturday 18 March, the Big White Wall will be open to members of the public for the first time, visit Eventbrite to register for your tickets. The Big White Wall project is supported by Cass Art and Liquitex.