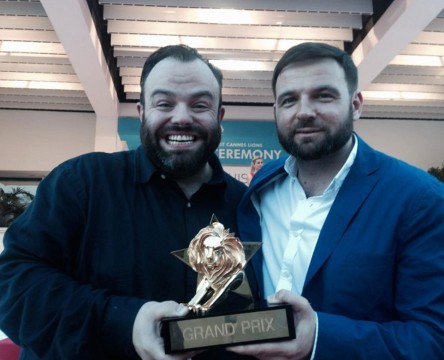 Richard Brim accepted the 2014 Cannes Lions award for Agency of the Year on behalf of Adam&EveDDB, of which he is Creative Director. Cannes Lions is the world’s biggest annual awards show for the creative communications industry.

Brim studied BA Graphic Design at Central Saint Martins, specialising in advertising. Under his directorship this year, Adam&EveDDB has been responsible for the John Lewis Christmas tearjerker ‘The bear and the hare’ and the Harvey Nichols ‘Sorry I spent it on myself’ campaign.

Speaking about the success, Brim said: “We have been crowned Cannes Lions 2014 Agency of the Year with a whopping 22 Lions, including four grand prix for Harvey Nichols and seven gold, four silver and seven bronze Lions across six clients – Harvey Nichols, John Lewis, Google, Diageo, Marmite and Volkswagen. Well done everyone!”