Discomfort is usually a feeling to be avoided when designing a product but it’s central to Anke Buchmann’s award-winning collaboration with Nachtmann.

Nachtmann, a 200-year old Bavarian glass company, approached BA Ceramic Design to collaborate on its annual NextGen competition. The scheme, now in its 10th year, was a particularly attractive opportunity for the Ceramic Design students not simply because it would bring the winning design to a global market but because it offered the chance to work in glass, rather than clay:

The two materials use plenty of similar processes like mould-making. But I was interested to see what I could learn from glass that I could transfer to clay. So, for me, it was all about staying open.”

With the brief defined simply by what was feasible in production, students had free reign to go where their inspirations took them. Buchmann wanted to explore the combination of mindfulness and materiality.

Responding to our growing reliance on screens and the digital world, the designer wanted to create a drinking glass that jolted the user back into their physical present. “I’m interested in getting a new language into mass production,” she says, “I worked on a surface texture that, when holding it, brings you into the moment. Sometimes we get into a routine of functioning, driven to our devices, but I think it’s important to create pieces that bring us back to now. We are all screaming to be real again.”

At the same time as Buchmann was defining her approach, Punk was celebrating its 40th anniversary. A Punk-related book display was on show in the library and exhibitions were popping up across the city. Alighting on metal rivets and raised studs as a recurring motif for Punk fashion, Buchmann saw potential for a similar form to translate into glass and offer a balance between tactility, aggression and beauty. 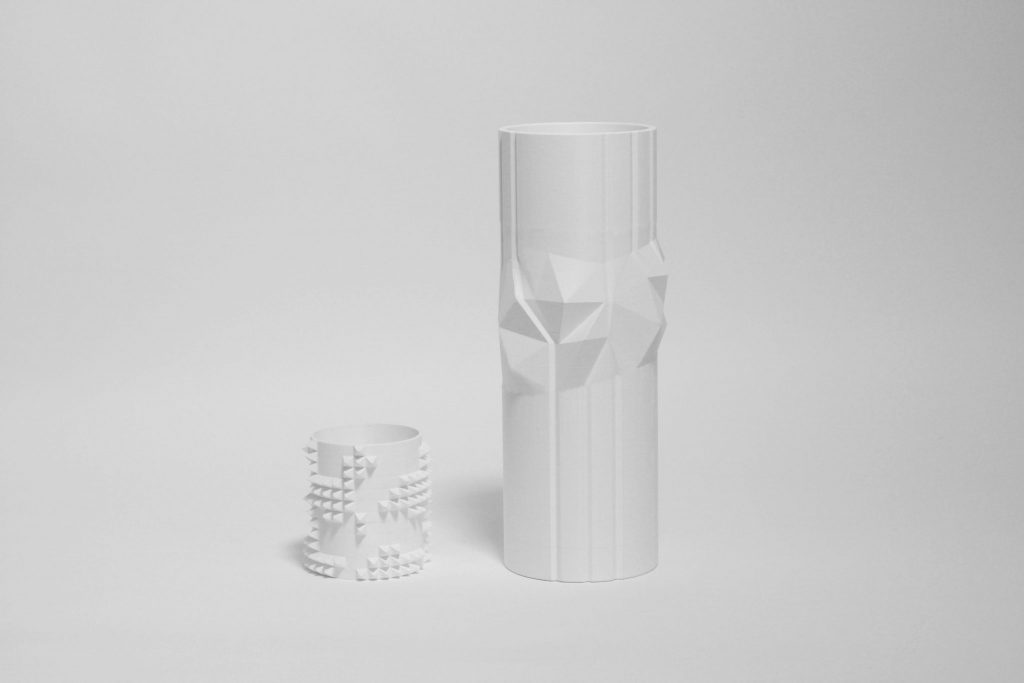 3D prototypes for PUNK, Anke Buchmann for Nachtmann NEXT GEN

“I come from an advertising background, so I often look at the target audience. For this brief it was getting younger people interested in crystal and the people that were into Punk form part of that younger market. Punk spoke its mind, didn’t care what people thought… This idea of being real again, feeling yourself but breaking out of the ordinary.”

Having defined a collection of tumblers and decanters through various models and prototypes, Buchmann was selected as the winner of the NextGen competition with runner up spot going to fellow BA Ceramic Design student Valerie Totubaline. Then began the process of preparing the PUNK collection for production which saw the designer working closely with the Nachtmann team to get the surface texture of each part of the product just right, not so sharp that it hurts but sharp enough to register. 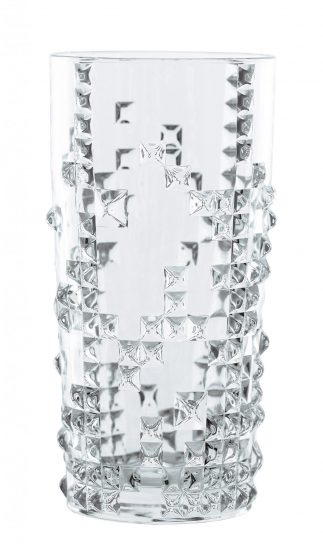 Richard Volt, Managing Director of Nachtmann, praised her winning design as “a perfect summation of everything we’d aimed for: modern, unique, and personal.” In fact, the design team were so taken with Buchmann’s vision they added a set of martini glasses to the collection.

The staff and students of BA Ceramic Design headed to their annual trip to Ambiente at the start of 2017 with the added excitement of seeing the final designs launch at the Frankfurt fair. In June, PUNK was awarded a Good Design Selection honour at the Good Design Australia Awards. Looking back over the project with her PUNK collection launching in the UK this summer, Buchmann – who heads into her final year on the course in September – says:

“I would like to work with glass again. I had no expectation at the start of this project but tried to be as open as I could. Now I feel like anything is possible.”