We talked to Anna Driftmier, MA Performance Design and Practice student and designer whose ambitious work has appeared at multiple festivals and productions from Camden to Edinburgh.

Tell us about your practice.

Recently a director jokingly commented that she could spot one of my shows in an instant. I work towards creating spaces where there is a dialogue between the performer and the designs.

Every design decision has to be backed with knowledge of how I will budget, schedule, build, and deliver that idea. By the time the objects enter into the rehearsal space I know them so well that I can demonstrate their uses and start conversations about further ways to explore their potential.

Could you tell us in a bit more detail about Arden Creatures?

Arden Creatures is the most recent production from Footfall Theatre, an award-winning company exploring gender through re-workings of classical texts. The source material for Arden Creatures is Shakespeare’s As You Like It.

In this production the traditional pastoral comedy has been re-modeled into an extremely lively, physical production of just four characters and two Klezmer musicians. It was at The Cockpit Theatre at The Camden Fringe in late August and is currently in development for a trip to the Edinburgh Fringe Festival next year.

What was your main inspiration for the design of this production?

I decided to create a world based on the designs of Art Nouveau and the Arts and Crafts Movement. The director and the cast had also decided they wanted to develop Shakespeare’s bird references into the characters’ movements and interactions.

I had started to collect a large number of Art Nouveau patterns and objects that incorporated peacocks, swans, and owls; this led to the natural development of constructing giant birdcages.

During rehearsals the show became increasingly physical, for example the cast used strength as one of the ways to redefine gender barriers. Taking inspiration from Emilie Floege and Arabic and Asian influence I used harem pants and other androgynous wear to blur the gender boundaries further whilst providing the actors with costumes that would not inhibit their movements.

Read the rest of the interview on the CSM website.

There are only a few places left on our MA Performance Design and Practice course. Visit the course page to find out more and to book your open day. 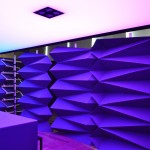 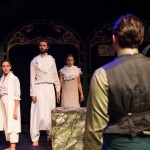 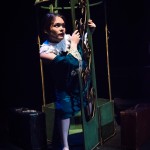