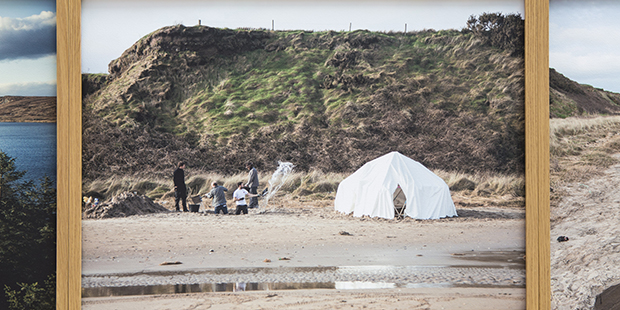 Luke Franklin graduated in 2013, he was awarded the top prize in the Nova Awards amongst more than 35 of the best graduates at CSM.

Please tell us about ‘Four Bothies’

George Mallory might have been the first person to climb Mount Everest in 1924, a full 29 years before Hillary’s successful ascent, but he died in the attempt.

Before leaving he was asked why he wanted to attempt the climb. ‘Because it’s there’ he replied in what’s known as the most famous three words in mountaineering.

It’s an extraordinarily flippant way to describe one of the greatest human endeavours, not just the conquering of the highest mountain but
of exploration itself. This instinctual need to explore our world, sometimes just for the sake of exploration itself, is an inherent part of the human condition.

With a story like his it’s not hard to imagine what Mallory’s reaction might be to the idea
of art in cold places, that one might venture into the wild, not to explore but to make art. To play against, and explore those tight margins between success and failure in the pursuit of another equally inherent part of the human condition, the need to create.

A bothy is a basic shelter, unlocked and available for anyone to use free. Bothies are found in remote, mountainous areas of the Scottish Highlands, they offer rare shelter in some of the most remote environments in the British Isles and have saved many lives. Spartan and barely more than shacks these structures are quite beautiful, not just because of how they look and where they are but because of the respite they offer, straddling the line between life and death that explorers like Mallory found themselves on the wrong side of. We’ve hidden 4 bothies in some of the

most remote and hardest to access parts of Ireland. Although their construction has been documented, their location will be kept secret and will only be passed on through word of mouth.

Each bothy will fulfil a role in the artist’s process: A library, a study, a studio and a gallery.

Their creation has been an expedition but so should their viewing. The viewer has to come on an expedition with us. Sure, in part to explore, but mainly to take part in the creation and be the final piece in our creative and explorative process.

In a gallery the work takes the shape of photographs of them and their construction,
a piece of prose describing each and their purposes as well as hinting at their location and non-disclosure-agreements signed by all 4 constructors.

Why did you choose to do a postgraduate course?

I chose MA Art and Science because it
seemed that this particular course suited me.
I have always been multi-disciplinary and unfortunately, I had to make a challenging decision to choose between Physics and Art, at an early stage, as both subjects were scheduled together in school. I clearly remember that I was the only kid that had such a problem. Since then, I have always gravitated to work that uses what I can offer as much as possible. I am a filmmaker by trade, I direct commercials, an endeavour that is intensely creative, technical and physically demanding. I absolutely love it!

The MA Art and Science gave me the opportunity to explore work and ideas of my own, that do not fit neatly into a single mindset. It has literally opened doors for me into places that I could have never imagine I would get in without the university’s help and the course’s introduction.

Please describe your field of work

Explaining what I do is always difficult to express. The easy line is that I create adverts and I am an artist. The hard part is when they ask me “What kind of advertisements do you do and what kind of art?”

For me personally, both of these subjects are identical. I am proposing an idea, a product, a situation to an audience and communicating something very discrete in an entertaining or exciting or engaging solution. The outcome
of ideas, products and situations is always different. I do not have a specific medium and I like that. When you only have a hammer everything starts to look like a nail.

I work with quite big projects, that have a really tight and neat conceptual core and the need to execute them is quite brash and aggressive.

I suppose the common thread across everything, is that I focus on keeping it to a mass-market, engaging and exciting to a wide audience as possible. I have no interest in esoteric conversations and my ‘art’ work should feel just like a home, a welcoming experience, in the middle of Coronation Street. An advertisement that I have created that creates the sense on the wall of a gallery.

I find artists say very vague words to very small, hyper-educated audiences. The way I explain my work is with more definition, it is practical and I focus on the enjoyment of the user.

How would you describe your course?

It is like most creative courses; it is a stage on which to excel. Whether you do or not is your choice.

Were you influenced by the central London location?

I work in London, it is the advertising capital of the world and to be able to work and study it had to be in London. Alongside that, there was an interaction between institutions such as: the Gordon Museum, the British Library, the Seed Bank at Wakehurst all these amusing places were on our doorsteps. The introductions on the course were extremely helpful.

What sort of a person do you think you need to be to do well on your course?

What would you recommend about CSM?

My experience as a postgraduate student
is probably very different to the average undergraduate student coming in and looking for the Art School experience. If you are studying for a postgraduate degree you want it to matter, you want it to mean something. You are going out of your way to measure yourself against the highest bar you can find. Central Saint Martins was that bar.

What advice would you pass on?