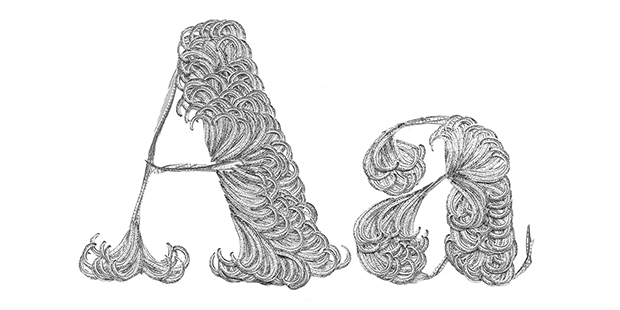 Charlotte talks about her typographic work which saw her nominated for the Nova Awards in 2013.

CSM’s Nova shortlisters are put forward by their Course Leaders and represent the very best talent across the degree shows. Here, Charlotte provides an insight into the work which earned her the prestigious nomination.

"Most of my work experiments with the process of collage; using found imagery – predominantly from botanical textbooks – and decomposing the elements to recombine them in new contexts. The inspiration for my visual aesthetic comes from a range of sources such as literature, surrealism, geometry, natural forms and psychedelia.

Part of a larger series, Kaleidoscope II is a visual response to the work of Philip K. Dick. Philip K. Dick was a science fiction novelist whose work examines social and political themes, metaphysics and altered states. Continually questioning reality, Dick often explored paranoia, schizophrenia and drug abuse. Inspired by psychedelic and optic art, this piece is a kaleidoscopic collage influenced by Philip K. Dick and particularly A Scanner Darkly.

‘Circles’, is a selection of work from a larger collection that examines the attempts to explain order in nature and explore the idea that everything in nature can be interpreted mathematically thus resulting in the emergence of patterns, such as the spiral of seeds on a sunflower. Influenced by research into mathematical theories and concepts, such as, geometry, chaos theory, Fibonacci numbers and the golden spiral, this piece consists of nine collages inspired by patterns in nature.

The selection of letters on show are a part of Luciferous Logolepsy, a project dedicated to the exploration of words and their definitions; culminating in a collaged alphabet inspired by my fondness of words. Each word is represented by a decoratively designed letter informed by the words definition. The explanation of this project is also in its title, Luciferous (‘illuminating, literally and figuratively’) Logolepsy (‘an obsession with words’).

Finally, Wandering in Circles initiates the beginning of a new series of work. Investigating and exploring my inherent curiosity of circles; particularly concerning the notion of symbolism, as well as geometry, divination, mysticism and semiotics”.