My experience of UAL has been amazing so far, it’s an art school that provides plenty of opportunities and resources for their current students and alumni. However, when I started studying at Central Saint Martins, I noticed the lack of African/Caribbean representation amongst the students and I had no knowledge of black teachers or technicians. When speaking with current students concerning the low numbers of POC, I was informed that the majority of black employees were only accounted for as cleaning, kitchen and beverage staff. Not to discredit the wonderful staff at the college who have helped me countlessly, but POC representation matters.

It makes a black girl like me wonder what lies in my future as an artist. Are the low numbers of black people at CSM due to cultural upbringing? A lack of awareness of the careers in the arts? Or is it financial concerns?

According to the Universities equality, diversity and inclusion report for 2017 only 31% of BAME students applied for first year undergrad course, 42% of students were from BAME back-rounds, 29% were UK/home students and 85% were international students. I applaud UAL for realising the gap and their action to pursue and bridge the gap yet still these numbers are not detailed enough or specific to black people. It also excludes the percentage of black teachers, so what is the percentage of African/Caribbean students across the schools? 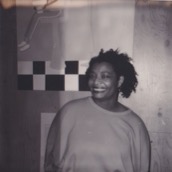 Whilst walking through CSM one day I stumbled upon a poster advertising an open discussion based on the lack of diversity and people of colour at the college.  I am the only black person within both year 1 and year 2 of my course. I wanted to discuss and exchange stories and experiences whilst also connecting with other creatives of colour. Walking into the room was an obvious answer to the question on diversity at the college, there were 6 of us in total including Kelly Walters… (Project leader and visiting academic in Graphic Communication Design at Central Saint Martins)

Kelly Walters is a Designer, Educator and Curator whose work investigates the intersection of black cultural vernacular in mainstream media. She feels her role as a Designer is to understand how socio-political frameworks and shifting technology influence the sounds, symbols and style of black people. Kelly lead the conversation by asking us to discuss our experiences within the university…then the spark was ignited.

During the meeting we discussed our personal stories, experiences and thoughts on what it meant to be an African-Caribbean artist; if we identify as artists of colour and finally does this fact affect our art practices. These conversations resulted in the planning and fruition of the ‘Open Dialogue’ exhibition.

The event/exhibition was packed full of emerging talented artists across the UAL colleges, both current and alumni as well as POC outside the university curious to see what UAL had to offer. An array of insightful and thought-provoking talks were presented, and the artists spoke about their own understandings of being artists of the African Diaspora. The exhibition highlighted the shared complexities of race, identity politics, gender stereotypes, sexuality and religious views present within the Afro-Caribbean community; alongside art making practices. The stories of being either the only or one of two black people in their courses was very common, so knowing I wasn’t alone in this experience was interesting. 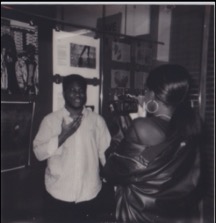 The event was definitely a success and alive with the appropriate music from Afrobeats to Hip-Hop and snacks which included plantain chips and chin-chin. Everyone was connected and engaged which made all the work put into it very rewarding. I was able to speak with alumni from the university and see myself in their success. I was given a lot of advice, inspiration and made a few friends too. I appreciate Kelly Walters for coming all the way from America to London to bring together all these amazing creatives of colour. 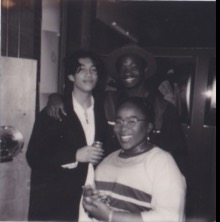 ‘…just to have a convening of black students, that’s something that seems rare and I’ve been looking for since I came here and it’s nice to hear from people that were older and more experienced. It was a good reference point if you wanted to know what steps to make in your career, what not to do, what attitudes to have. It was cool too see the different paths people took to either fashion or doing fine art. It was good to have the social aspect and connecting with other students that might be BA or MA and good that it was across UAL too’.

An extension of this exhibition has led to the ‘Normal to Dissent’ exhibition in the Lethaby Gallery and Window Galleries at CSM. Window two includes the artist statements of all contributing artists of the Open Dialogue exhibition courtesy of Kelly Walters, this will be up till the 26th April 2018. (Thursday evening, April 19th is the closing of the exhibition reception in the Lethaby, 6-8pm)

A big shout out to all those who participated in the event, view the photos here!

Normal to Decent is on display in the Window Gallery at Central Saint Martins till the 26th of April.