I spent two weeks in Manchester at the Centre for Chinese Contemporary Art (CFCCA) during the end of my Master’s programme at Central Saint Martins for a research-based residency. I had moved to London from Hong Kong for a year to attend my course, and the residency provided me with an opportunity to reflect on my personal experience of moving between countries and cultures. I applied for the programme hoping to think about environmental concerns that define the 21st century including environmental sustainability, social economy and human rights in the context of the UK.

In Hong Kong, there are many urban agricultural organisations that have been set up in recent years such as rooftop farming (eg. HK Farm, Rooftop Republic, Time to Grow), community farms (eg. Mapopo Community Farm, Sangwoodgoon), and guerrilla gardeners. This phenomenon is a testament to the burgeoning local foods movement. Hong Kong is a city that is known internationally for the image of uncensored capitalism. Capitalist conditions affect the daily consciousness of people and several grassroots movement have been developed to circumvent the existing capitalist forces that dictate livelihood and manipulate human relationships, one of which is urban agricultural initiatives. This movement involves environmental missions that encourage community’s resilience to climate change by absorbing storm water, counteracting the urban heat island effect and converting food waste into compost. The set of practices constitutes a social movement that is actively reclaiming control over food production and consumption and becomes a significant force of social activism. There are many artists that are involved in the social movement, as local artists have increasingly been engaging in the social practice for their inspiration and daring to use art to make an impact in our world. With notions of land ownership and spatial organisation of a city in mind, I thought about spatial usages and how that can affect experiences of everyday life.When I first arrived in London I was surprised by the a number of buildings covered in scaffolding. The cranes and construction sites not only became part of the visual aesthetic of the city but also bring out questions about how citizens must adapt to the constant changes when inhabiting the city. Movements of restaurants, shops and businesses, as well as individual logistical rearrangements seem to be an increasing struggle. The continuous expansion and urbanisation of London and its effect on the physical and conceptual understanding of spaces in daily life was unexpectedly overbearing when living here. When I learned about the residency at CFCCA, located in central Manchester, I wanted to try immersing myself in another metropolitan city while researching and learning about the influence of how a physical space affects people and their place in the city.

When I was doing initial research on Manchester, I learned that in the history of Chinese immigration, land reform during the 1960s in Hong Kong brought agricultural workers to Britain in search of a new livelihood. Many settled were drawn by the booming Chinese restaurant trade, and in 2001, there were 12,000 Chinese takeaways and 3,000 Chinese restaurants in Britain (The British Museum, 2010). Food culture has been one of the primary sources of cultivating the Chinese culture in Britain. Chinatown played a significant role in the development of Chinese culture. The area’s beginnings were rooted in the restaurant business, and after the immigration boom, many more surfaced in addition to other types of businesses. Areas known as ‘Chinatown’ exists throughout the world, and it is historically known as an ethnic enclave in an urban setting outside of China. Whether this spatial pattern of occupation in modern day is just an urban artifice used for touristic and commercial purposes is debatable. What I looked into was the integration of people with their environment during immigration and concepts of citizenship through land ownership – can we integrate into cities through culture? I visited Chinatown and incidentally a few days before I arrived, there was a fire that burned through a derelict building, known to be commonly used by rough sleepers, on Nicholas Street right behind the archway. Two bodies were found and were identified as two homeless men named locally as Wayne and James, who were nicknamed Uncle Albert and Popeye. The fire brought on awareness to tackle homelessness in Manchester. While exploring the surrounding area during my time there, I have also noticed several spaces near the centre that was often occupied as homeless encampments. These transient camps show that the homeless who are often subject to extreme forms of dispossession have a great stake in reclaiming urban space. The location, time, and nature of the incident led to a further expansion of my research into how an increase production of urban capitalist space can dislocate people. In capitalist cities, the quest for profit comes to dominate urban planning, and people are manipulated into having to pay money to simply enjoy space. As a city dweller, it is more and more apparent to me that the struggle over the right to use urban space prompts the need to reflect on the shifting relationship between our economy and social behavior. The questions: ‘what are our rights to the city?’ and ‘how can we create strong, sustainable, and inclusive societies?’ are continuously negotiated and examined.

During my residency, I spoke with Helen Tse, one of the founders of Sweet Mandarin, a Chinese restaurant right around the corner of CFCCA. She shared her story of wisdom and recipes passed down a line of women of three generations. It shows not only the strength and resilience of immigrants that move from their home to a foreign country, but the power food has in bringing people together. The story resonated with my personal experience of a desire to search for roots and connections when moving to a different country. The particularities and differences in culture seem to be more noticeable when subjected to an unfamiliar way of life and sets of attitudes. Having Chinese cuisine became romantic to me; food is a way to celebrate tradition, it triggers memories and turns out to be an outlet to psychologically travel back home. I learned about how the restaurant source their produce and supply food to the community, but what was most thought-provoking about the restaurant was not the technical aspect of the catering trade but the story and experiences of the people. However, most of the time there is little interest in learning about these aspects, and many of these stories go untold. This research residency allowed me to hear about this story, and an opportunity to share it with others. This supports my personal view on the power and ideological function of art as a form to explore, question, critically engage and share ideas that emerge from our society today. Rather than focusing on producing objects of art, I find it interesting to learn about the ways of thinking and attitudes different people possess and I believe art functions to be vigilant of lived conditions in which we function, and advocates an openness to provide alternative and counter-discourses.

‘What strikes me is the fact that in our society, art has become something which is related only to objects and not to individuals, or to life. That art is something which is specialized or which is done by experts who are artists. But couldn’t everyone’s life become a work of art? Why should the lamp or house be an object but not our life?’ – Michel Foucault 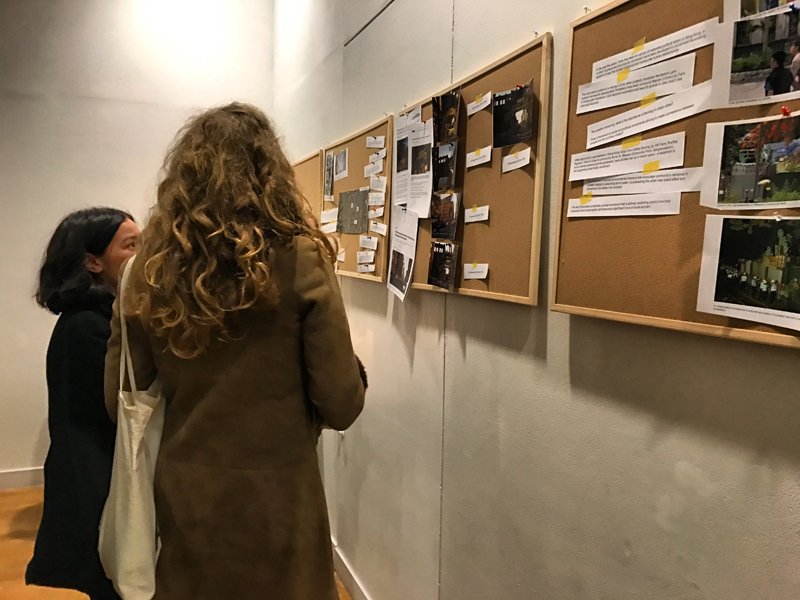 As a research-based residency, I had an Open Studio during my time there and arranged my studio similar to a research centre. I used cork boards each displaying the various research I was doing in relation to key themes such as food culture and origins, Chinese diaspora, citizenship, and land use. During the Open Studio, I was able to speak with a few visitors and had exchanges about their experiences of encountering Chinese culture in Manchester. The Open Studio provided an opportunity to present my findings and expand the discourse to an interested audience. Like all research, it is difficult to ascertain an end especially when the practices are functioning and social conditions are in constant development. My residency experience was a valuable experience and opportunity for me to learn more about the relationship between people and the environment and exploring issues relating to the social economy and human rights. In order to further share this journey, I will publish a zine that includes photo documentations and notes from my research activities that I aim to be available online as well.

I would like to thank Abi at CFCCA for the support throughout my residency and connecting me with organisations and personnel in Manchester that helped in the development of my project, the people I had exchanges with including Helen from Sweet Mandarin, Laura from FEAST journal, Francine from the Whitworth, and the visitors to my Open Studio. Lastly, I would like to thank Camilla and Lucy for the organising the AER residency and providing the opportunity for us to think more about who we are in relation to the world that we inhabit.

Art for the Environment Residency Programme

In 2015, internationally acclaimed artist, UAL Chair of Art for the Environment Professor Lucy Orta launched the Art for the Environment Residency Programme (AER), in partnership with residency programmes across Europe. Applicants can choose from a two to four week period at one of the hosting institutions, to explore concerns that define the twenty-first century – biodiversity, environmental sustainability, social economy, human rights – and through their artistic practice, envision a world of tomorrow.

Through personal research, studio production time, critiques and mentoring sessions with Lucy Orta and a selection of Europe’s most exciting cultural institutions, the residency programme provides a platform for creative individuals, working across various disciplines, to imagine and create work that can make an impact on how we interact with the environment and each other.

The AER 2017 Residency Programme is now open for applications