London based artist, Janine Hall graduated from Wimbledon College of Arts this summer after studying BA Fine Art: Painting before continuing on to MA Drawing part-time.

Janine draws shadows and plays with space via chance and balance. “I tend to work in series and like opportunities that allow an idea to move across into other media. For instance the Fold, Print & Draw series resulted in a rug; the original shadow drawings are a mix of graphite, photography and film. Some drawings grow in a straight line whilst others take control and their evolution is a surprise.” 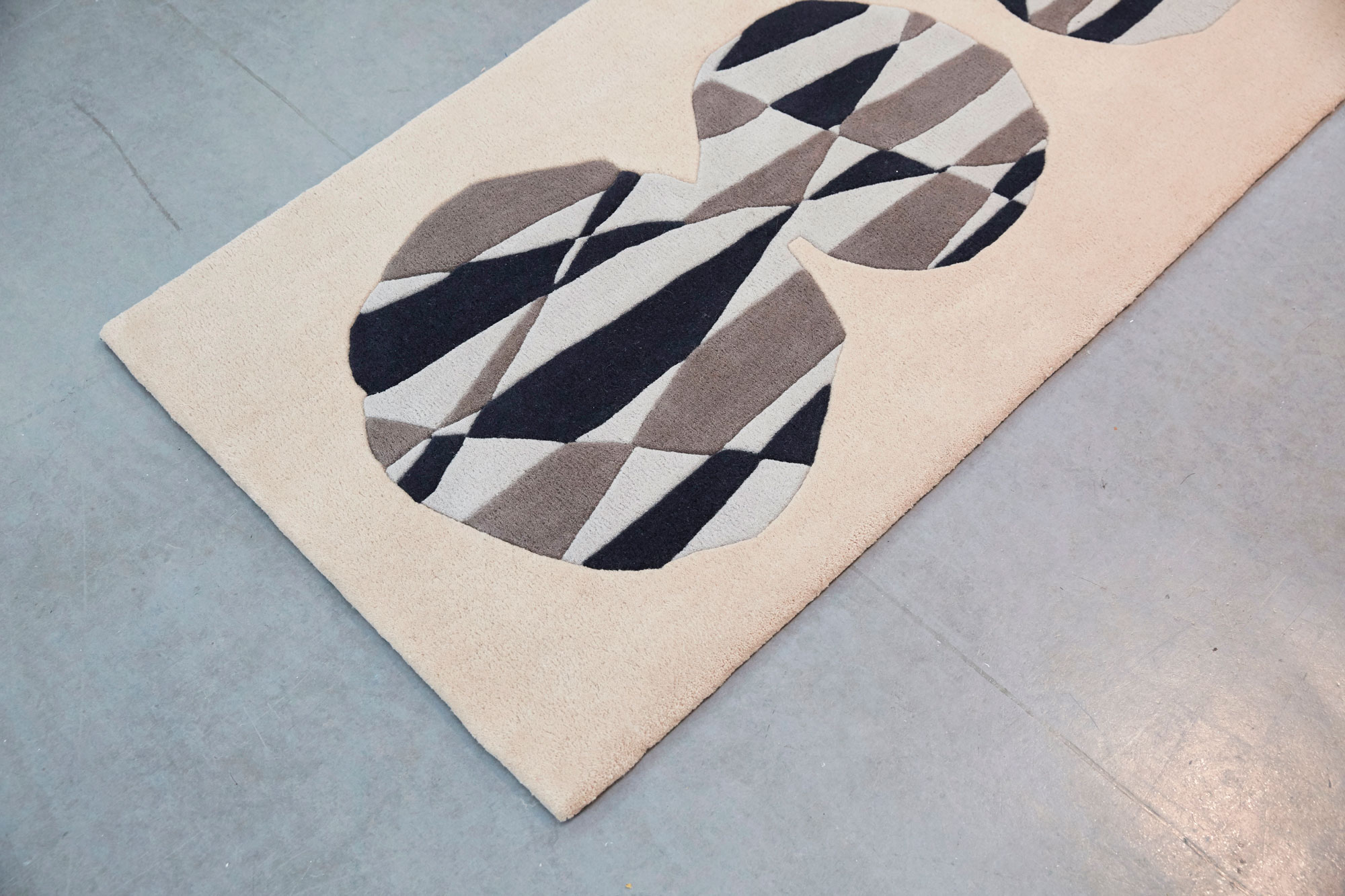 Janine’s time at Wimbledon concluded by winning the Marcus Beale Architects Drawing Award, which was presented during the opening of the 2017 Postgraduate Summer Show and included a prize of £2000 plus a residency at Marcus Beale Architects. Janine described the award as “a great way to keep the momentum going from the degree show and lovely to have an endorsement of the work produced this last summer. I’m hoping that the reference material I gathered will be inspiration for more drawings.”

“We started the award to support and help build a relationship with Wimbledon College of Arts, we have given seminars on the MA drawing course, and, as architects, we draw a lot, which makes the course an obvious synergy with what we do.

We really admire Janine’s work and enjoyed having her as artist in residence in the practice. [During her time here she produced] some incredible photographs, looking at ‘found views’ on our sites – you can see these on our website. Janine also produced a lovely and beautifully crafted pencil drawing as a result of her residency, which we admire and enjoy.

[The award] has definitely taught us, and made us think about what we do as architects.”

We caught up with Janine on her recent residency at Marcus Beale Architects:

“On graduating from MA Drawing at Wimbledon College of Arts this summer, I was lucky enough to win the Marcus Beale Architect’s Drawing Award which included a one week’s residency at their architectural practice. This was a new award given for MA Drawing and it was the first time that Marcus Beale Architects had hosted a residency within their offices as well as being my first residency.

After a brief conversation by phone, followed by a meeting with Marcus Beale at his office in Wimbledon we established that I would start the residency with a couple of visits to research two projects within the practice. My aim was to produce a drawing that came out of one of these projects. At this point I had no idea what the outcome would be.

The residency began with a trip to Oxford, via Paddington in the company of two architects from the practice, Caitriona and Valentin, to view The Morris Yard Project  – part of New College Oxford. This included the old Morris Garage, it’s yard and the adjoining listed buildings at 18-20 and 21 Longwall Street.

New College Oxford is tasked with providing a variety of high quality housing to suit students with different needs including people with disabilities. Marcus Beale Architects were enlisted to improve and optimise the use of the buildings and spaces for the college whilst keeping in mind their listed status.

On arrival, I was introduced to the site foreman, handed a hard hat and high-vis jacket and allowed to wander the site. 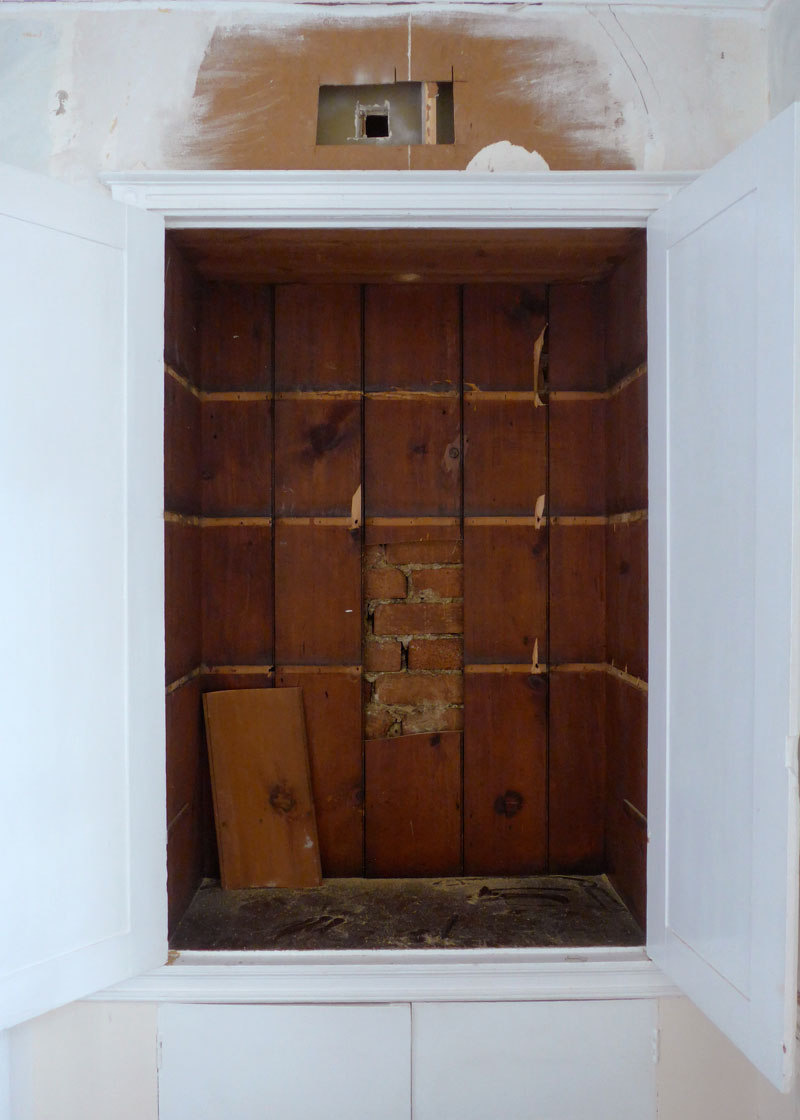 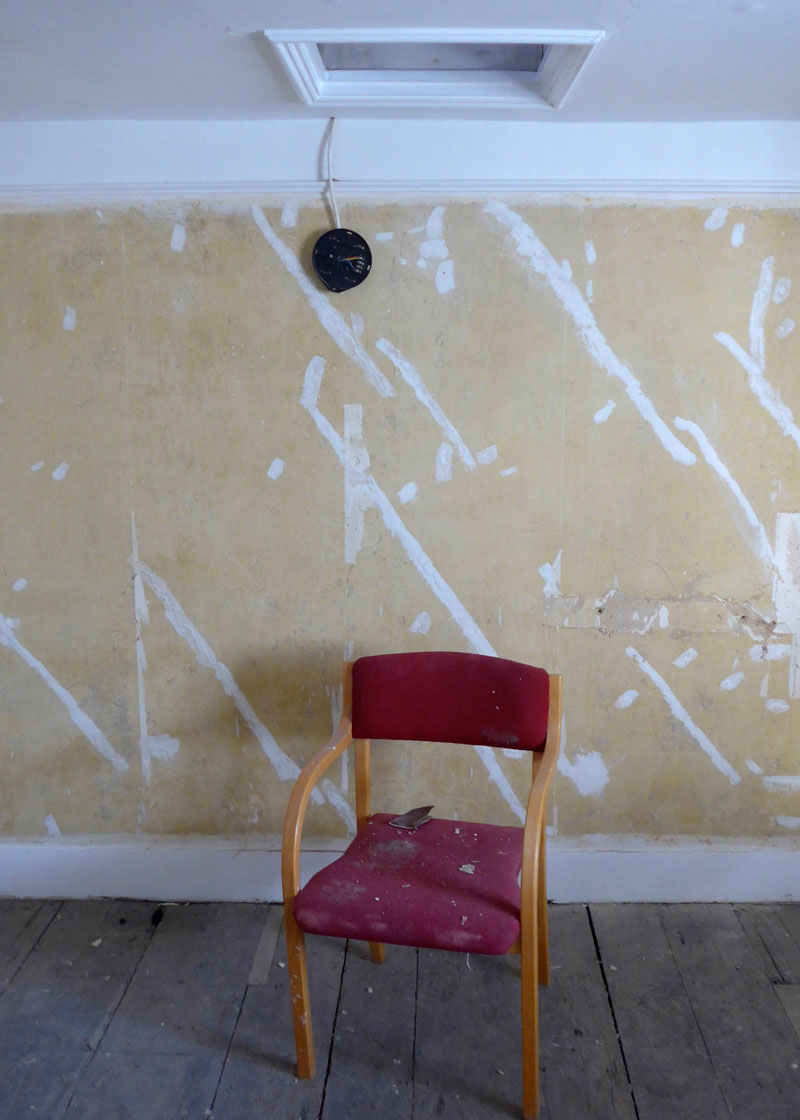 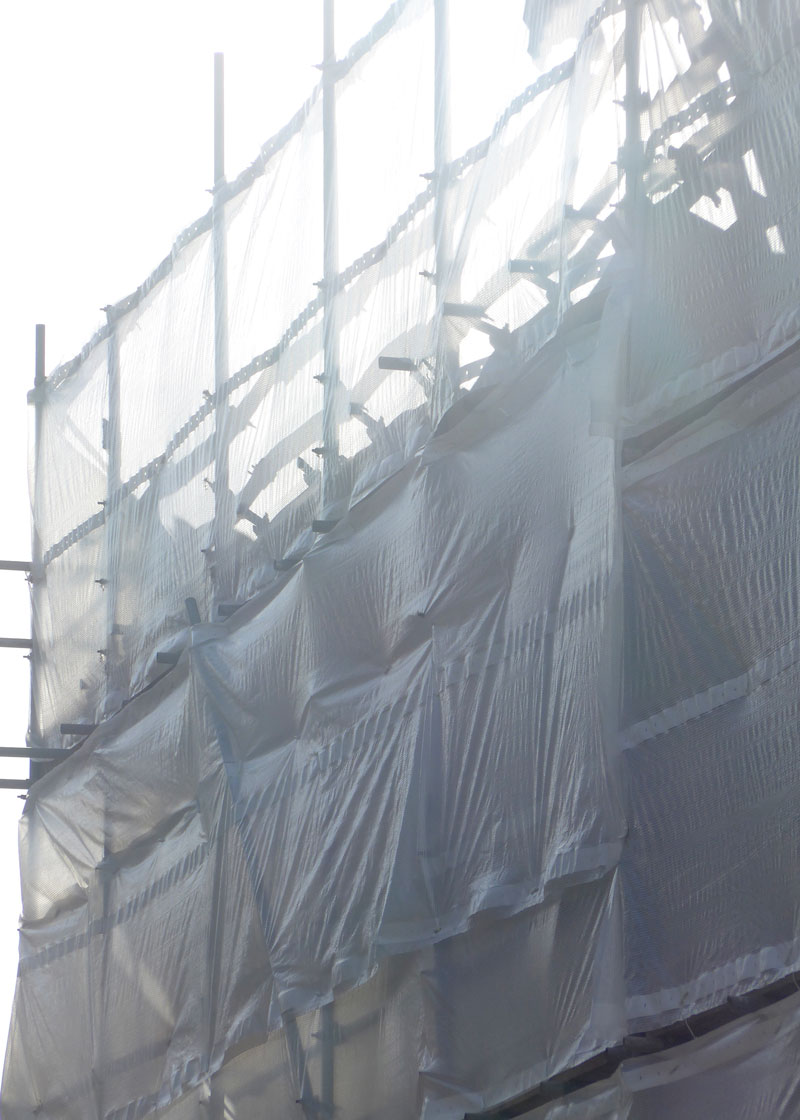 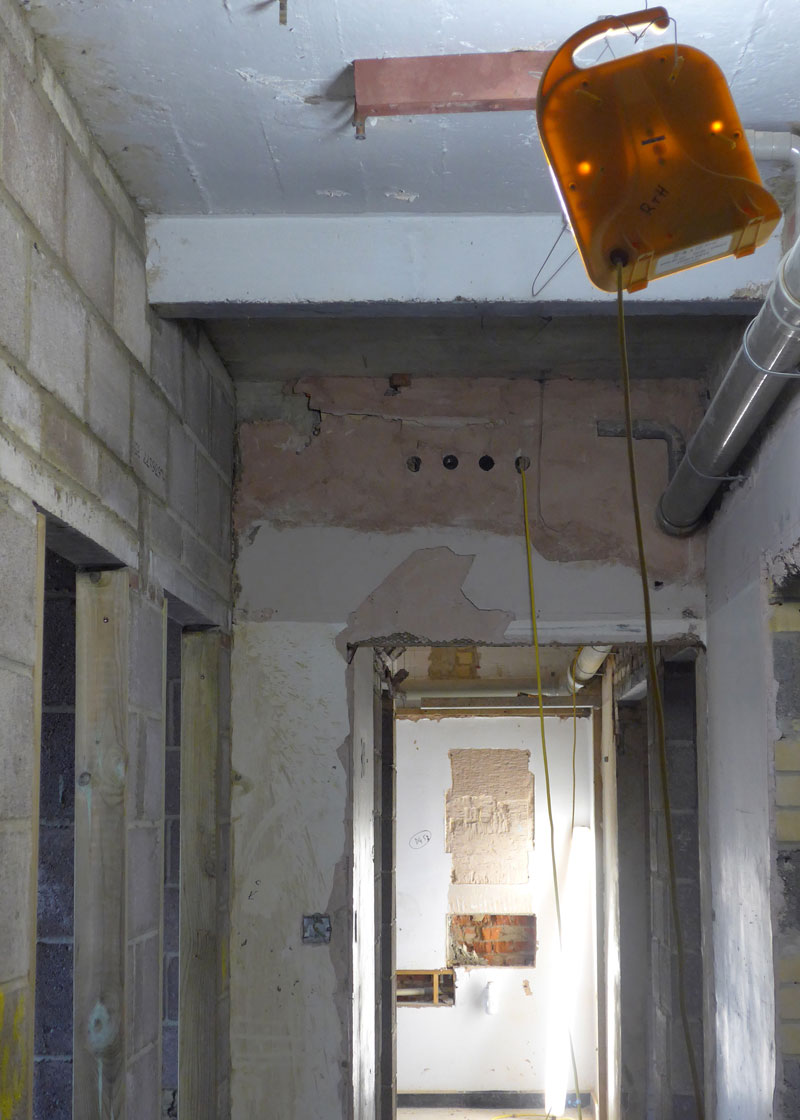 The old Morris Garage had been modernised in the 80s and not much, apart from the façade facing the street, remained. The adjoining listed buildings along Longwall Street consisted of small rabbit warren rooms and corridors that were full of memories and remnants of past occupation with marvellous layers of paint and plaster accumulated over the years. Beautiful colours and abstract shapes formed from years of random marks, both of accumulation and removal. 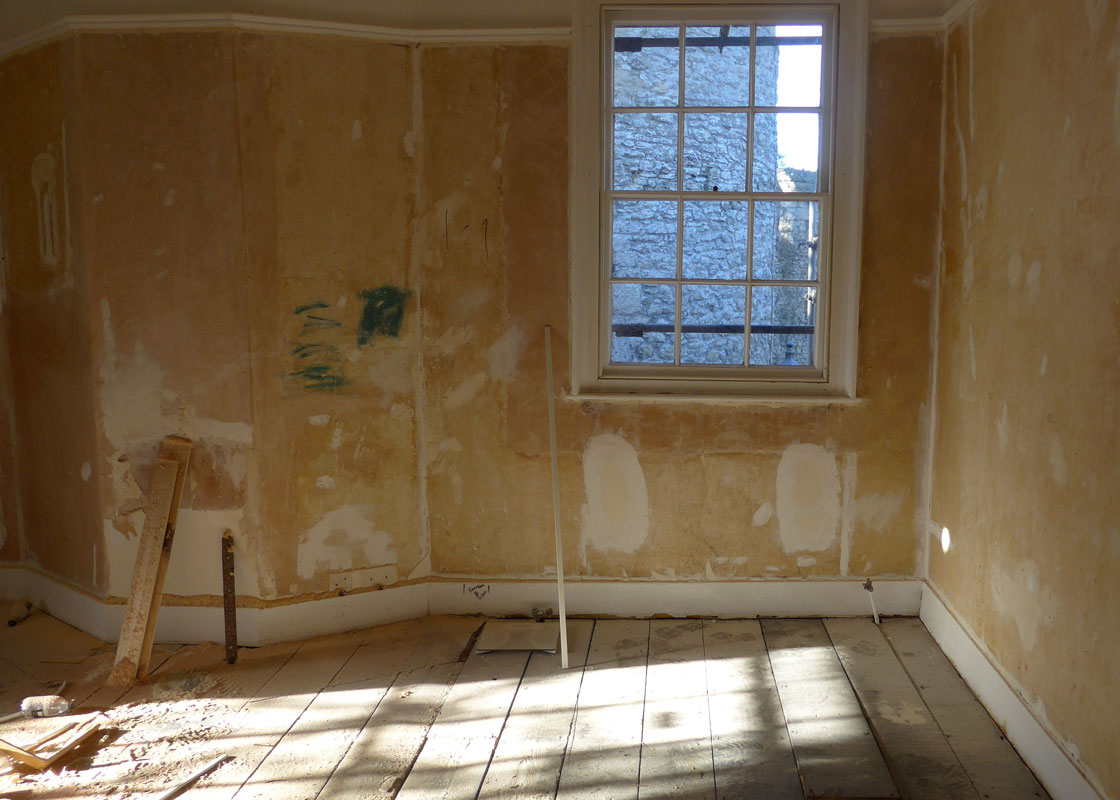 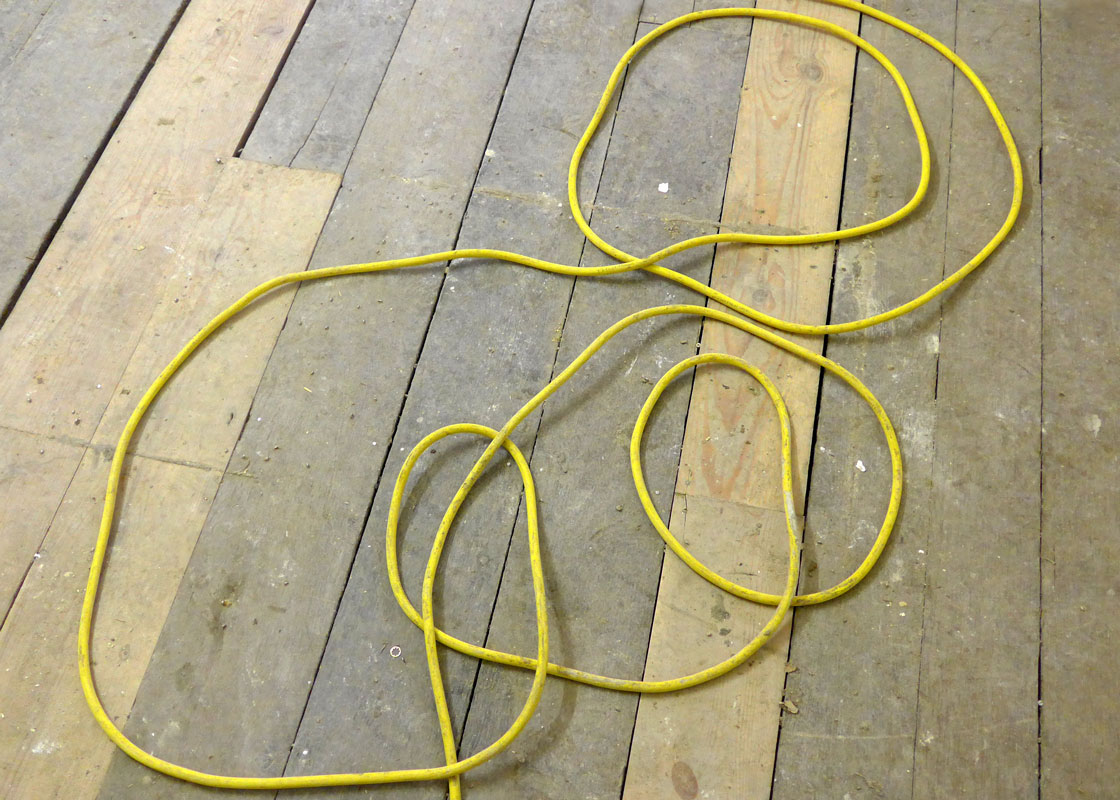 The morning of the second day involved a visit with Andrea, the lead architect, on a private house build for a couple in Wimbledon which will, when finished, include a living roof and wild flower garden above the kitchen and dining area. The rooms are all designed to face into a courtyard area which will have a water sculpture as one of its features.

At this early stage of the project the structure of the modern design was skeletal and open to be viewed alongside the detritus of building material and equipment delivered and left on the concrete and muddy foundations. Abstract, bright colours that formed, unselfconsciously, their own art within the space. 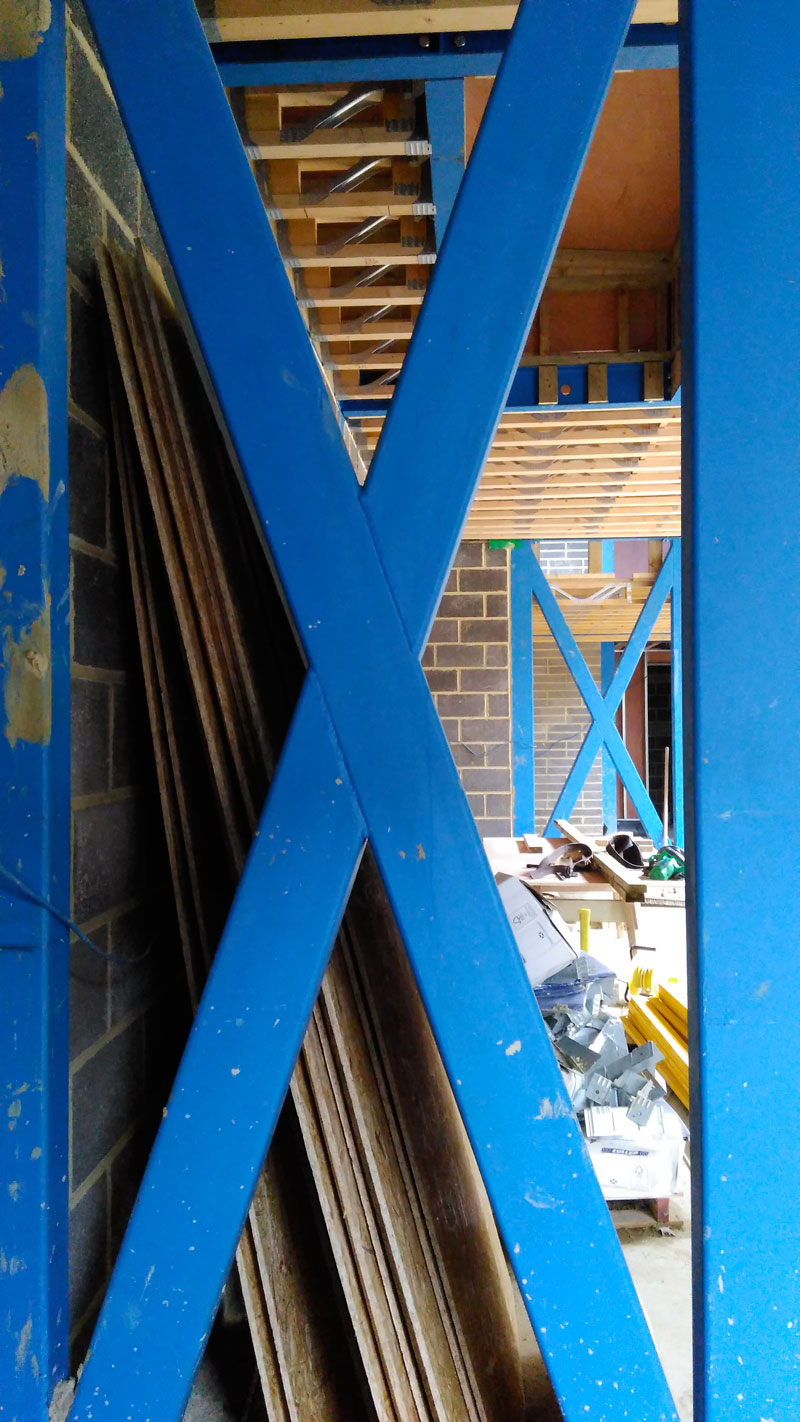 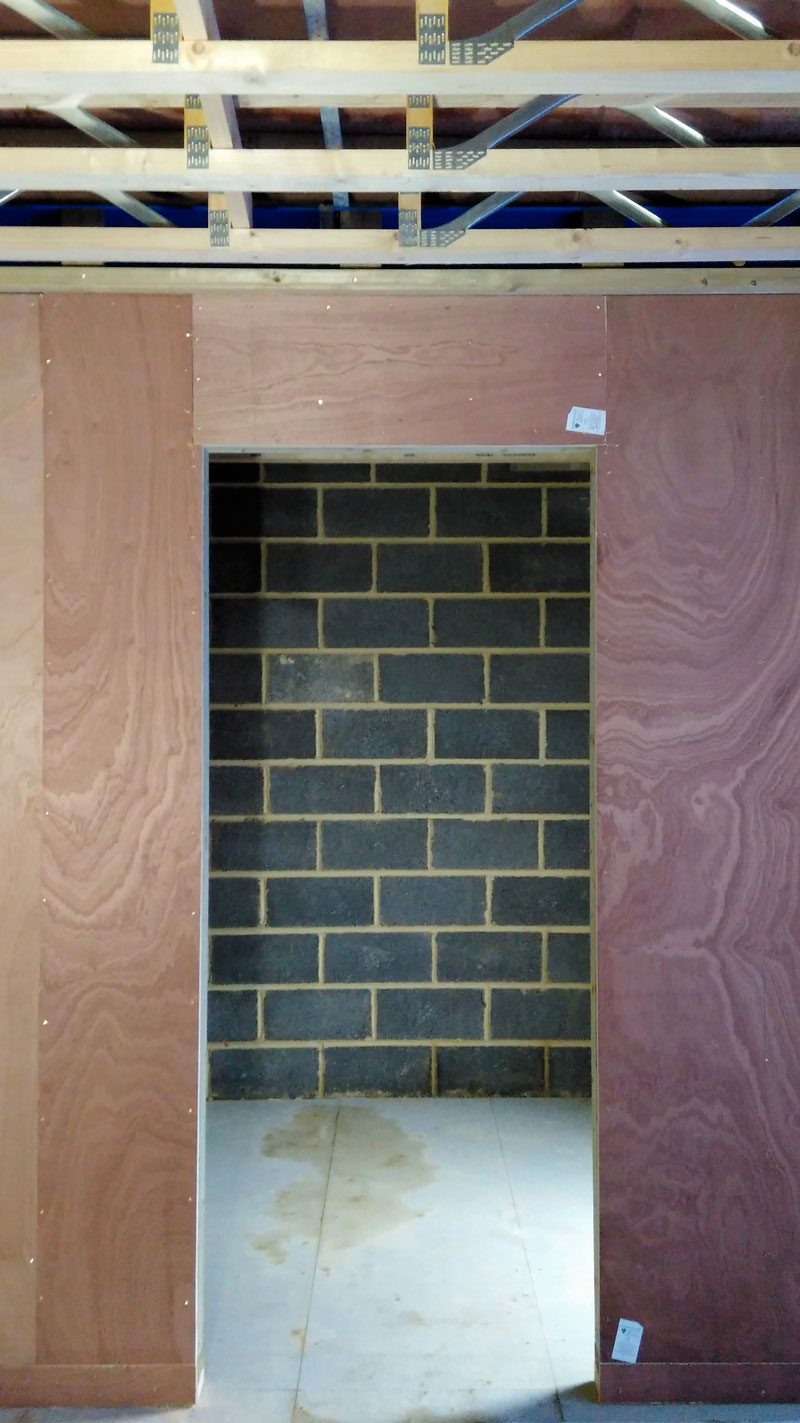 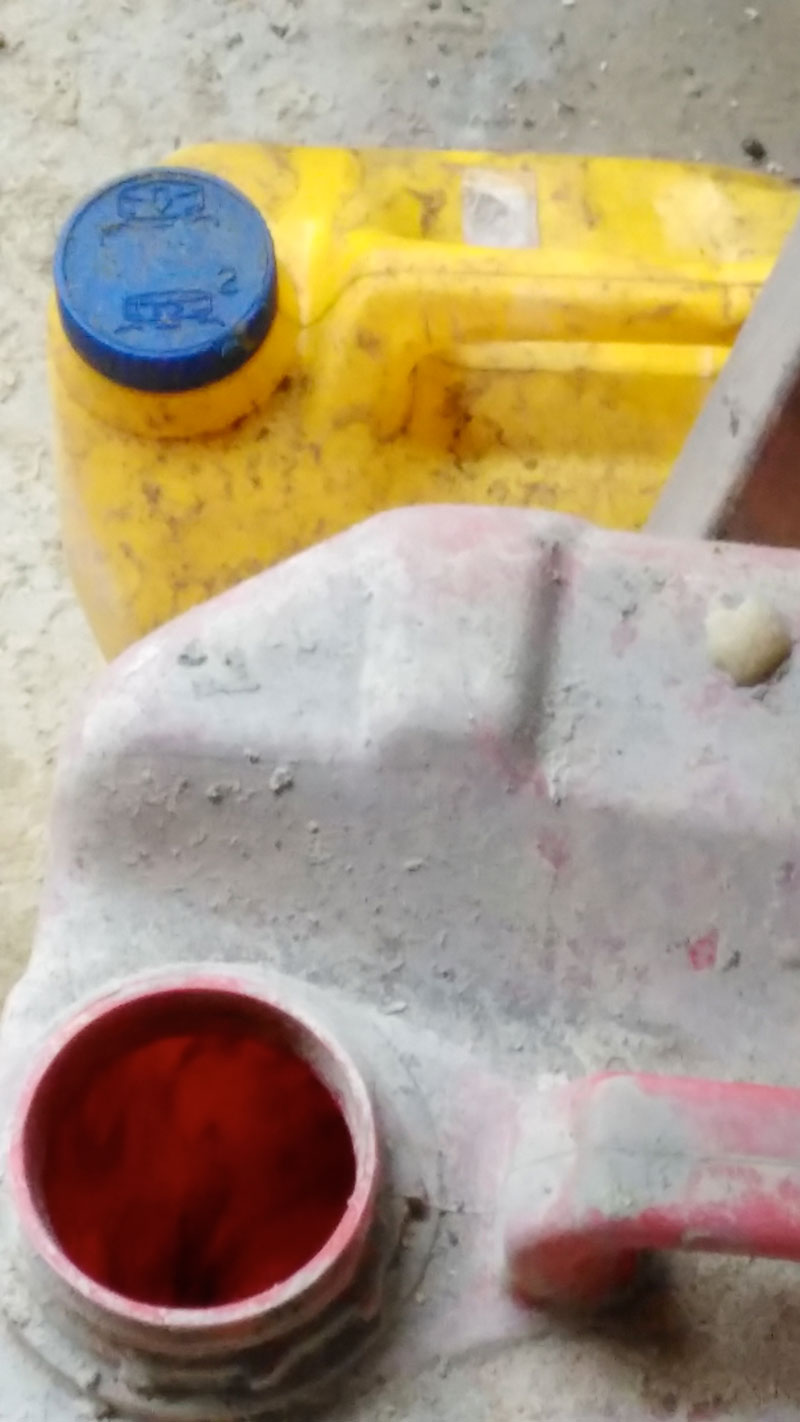 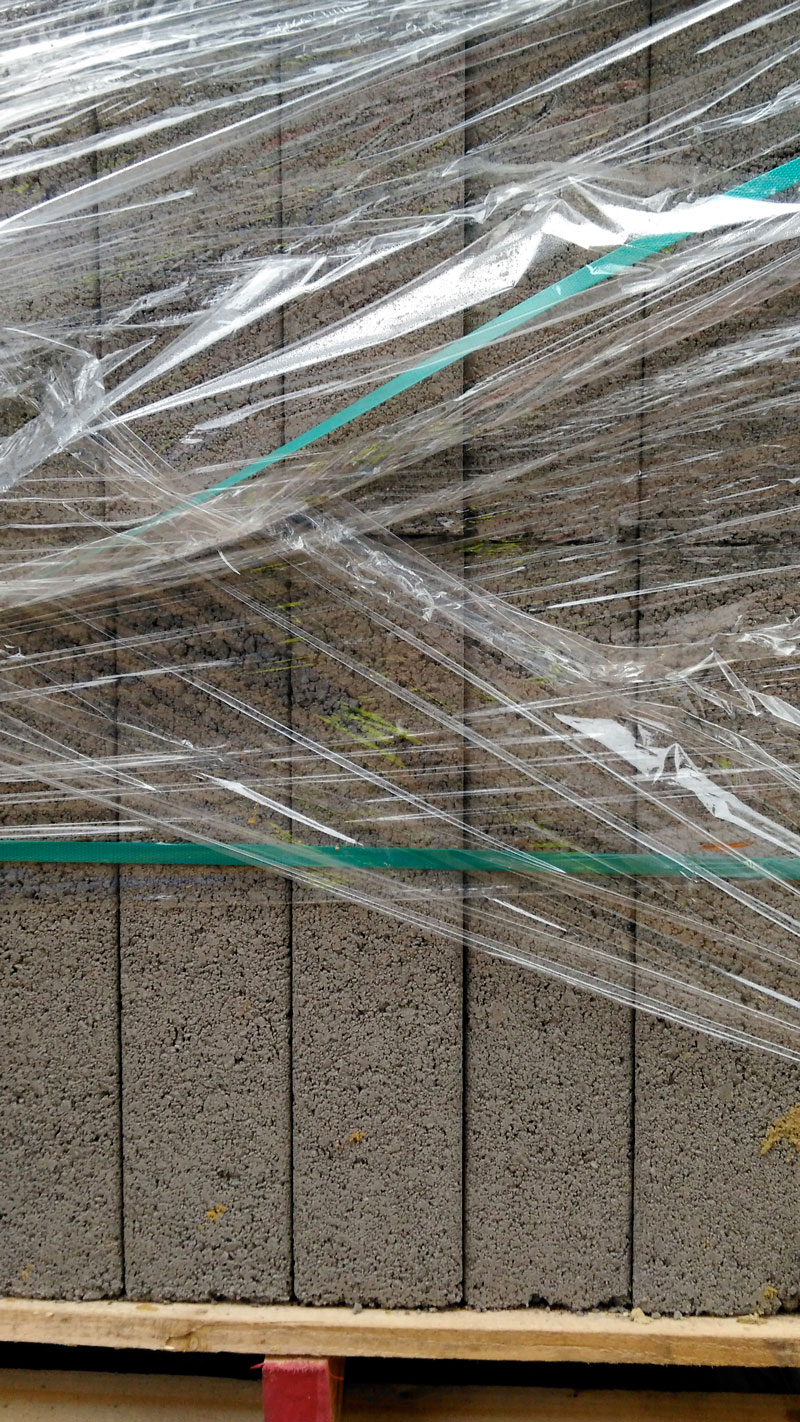 I spent the remaining days of the residency drawing in the company and surroundings of the Marcus Beale Architecture practice. These images are the result of the sun shining into their office whilst their weekly meeting took place. 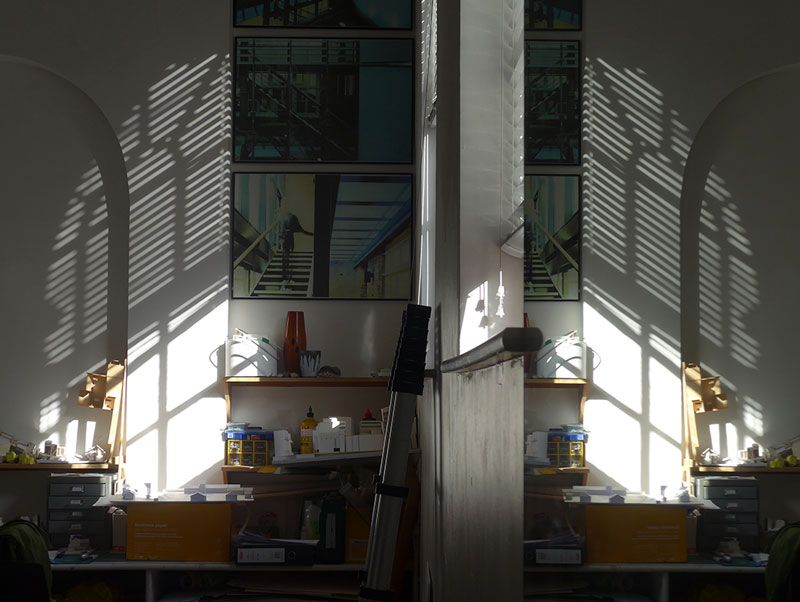 My final drawing, Outside in, builds on the window and shadow drawings I have developed over the past year. I have used, as reference, an image that came from the morning walk around the Oxford site when, luckily, the sun briefly came out from behind the clouds.

The image is drawn with graphite on a sheet of A1 paper. Pencils range from 6H via an F to 8B. It took me approximately 8 days to complete excluding the site visits. 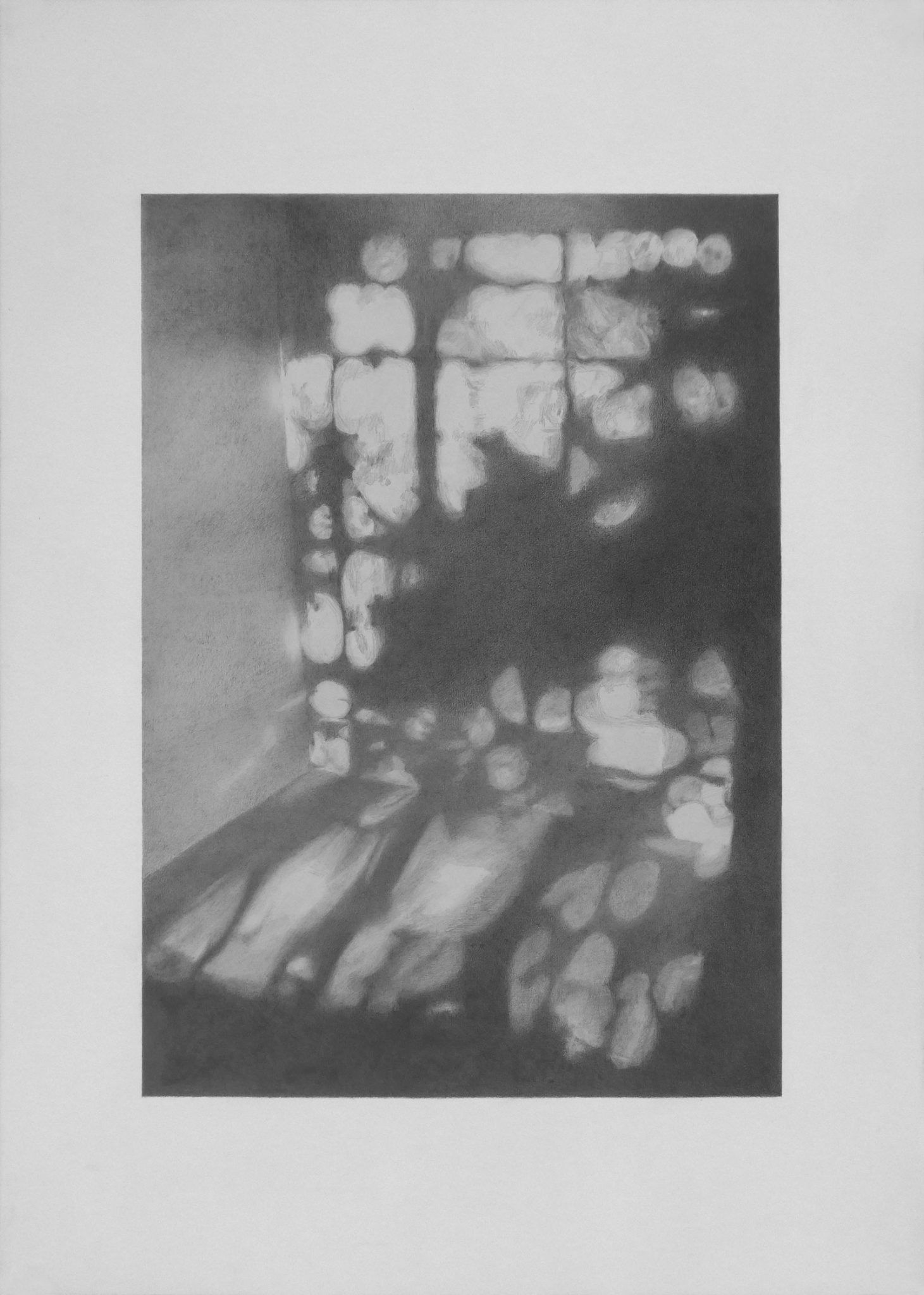 As with all my drawings I have drawn the shadow not the object. Shadows show the existence of an object on a sunny day or where there is a strong light source. I’m interested in drawing only the shadow, not the object, and by doing so I have effectively made the ‘present’ object absent whilst at the same time acknowledging its existence through the drawing of the shadow.

Although I have acknowledged its existence I couldn’t see the tree, as I drew, for some time. It was only as I stood back to view the drawing from a distance that the tree eventually came into view. Sounds strange to say, that when it arrived it was a surprise, so intently was I focusing on the window. It seems to be one of those things where you see one or the other… positive or negative. Close up the white areas of the window look like floating cloud-like objects, and their whiteness outshines the surrounding white frame.

I reduced the elements down to the light, the shadow and the corner space and deliberately removed, merged and blended the wall and floor edges to increase a feeling of space to introduce an element of ambiguity and sense of stillness.”

Tell us more about the Marcus Beale Architects Drawing Award

The Marcus Beale Architects Drawing Award is new and comes out of Marcus Beale’s own interest in space and drawing. It’s specifically for the MA Drawing course and this year is the first time it’s been awarded, so I am very lucky that the award was established whilst I was on the course and to be the first person to win it.

What inspires your work?

I find inspiration from many things.  Artists that inspire me include Agnes Martin and her meditative approach, Vija Celmins and Cornelia Parker’s drawings, Varda Caivano and Brad Lachore’s paintings, as well as my fellow student’s work. Inspiration also comes from the books I read and often, just looking and seeing the abstract in the world around me… they are all a big influence. 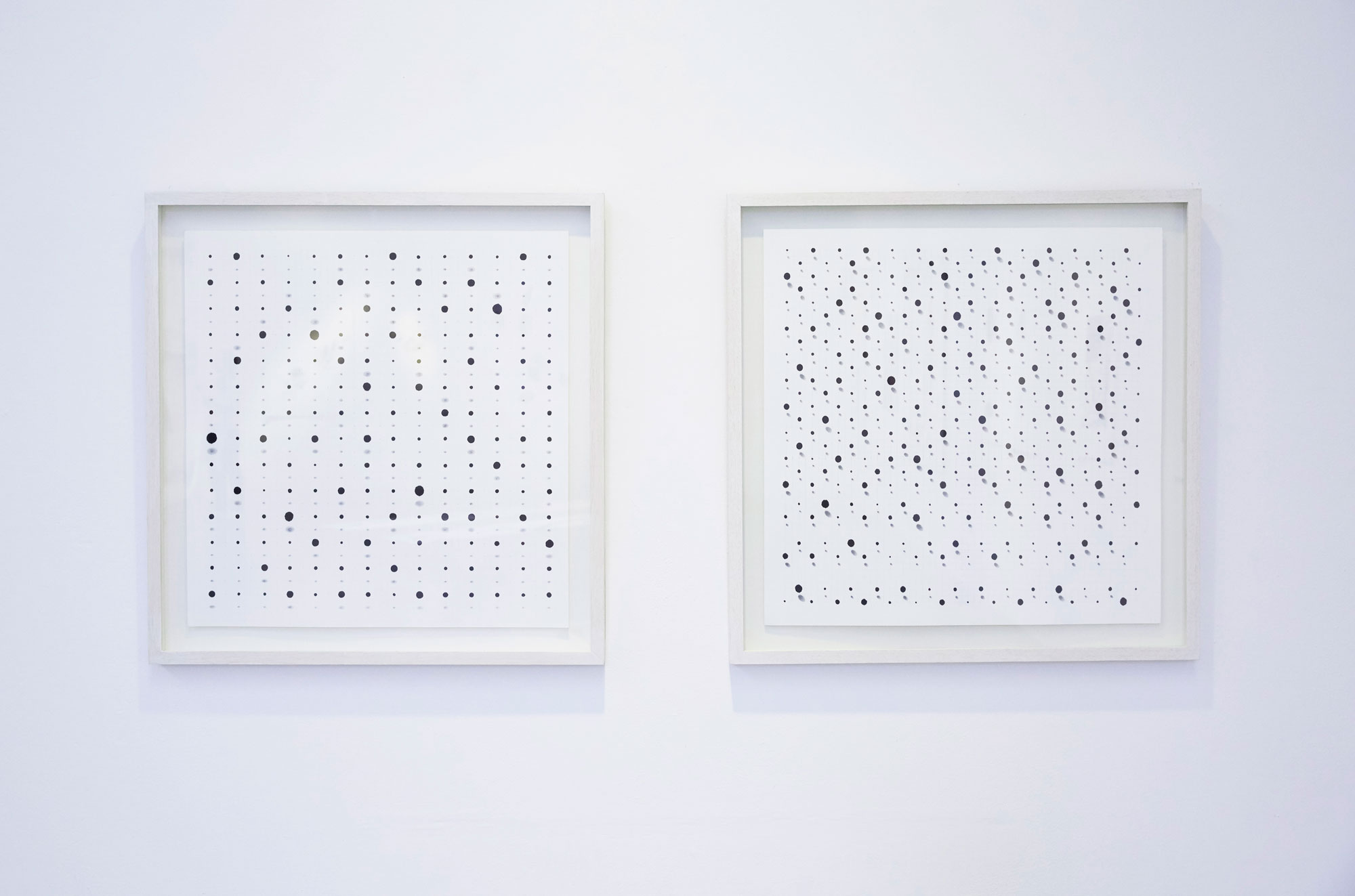 Did you use any of our workshops to produce your work?

The print room has been a big part of my work over the last year.  All the Print, Fold & draw work, plus the Blob/Blot and shadow work use etching ink on or within paper squashed by the Beaver Press.  I never know what the result will be but it’s always exciting to unfold the folded paper to see how chance has affected the piece.  When the ink is dry I draw with graphite to further develop the work.

What made you want to study MA Drawing at Wimbledon?

Location was a factor, and of course, I wanted to improve my drawing skills. However, looking back I think the main reason was to learn to think at a deeper level on what, how and why I draw.  The course has opened windows and doors in my head and each door I go through just keeps on opening further doors – and that’s very exciting.

I decided to apply for the BA Painting course first as the Drawing course did not seem long enough to allow me to learn all the things I wanted to know. It was great to update my knowledge of contemporary art as well as have the opportunity to engage with paint. It was a new experience for me.

What have you enjoyed most about time at Wimbledon College of Arts?

The people I have met. I have been very lucky to be on the course with a very strong group of individuals who together with Tania Kovats have been great fun to be with and very inspiring.

You can see more of Janine’s work at janinehallart.com and on her Instagram @janine_hall_j9

Find out more about MA Drawing