As Wimbledon’s Summer Show comes to a close we spoke with another BA Sculpture student, Alistair Blake, about his work and also his involvement in Wimbledon’s Maker Space.

Tell us about the maker space, how have you used the space?

It is supposed to be a Camberwell, Chelsea, and Wimbledon’s Maker Space as you can go to all the maker spaces at each college. It is a student run space, if you are going to use it a lot you also need to contribute in running it. The idea is a lot of people help out, it is communal thing. Every college is really different and Wimbledon has its own culture that has become apparent in Wimbledon’s Maker Space. It is also dependent on its placement, the Maker Space here is right by the wood workshops, sometimes it is a bit of a wood workshop overflow. It is really focused on making things whereas I don’t think that’s the case so much in the other ones. It is a really good idea, good space. I am very excited and everyone involved wants it to carry on, but there doesn’t mean there are some problems with it. What has been good is we are getting some of those problems solved and working out how to continue to make it work. It is not perfect right now, but it is really good and really useful. I am quite optimistic that it will get better.

We had a conversation about some of us staying involved in the Maker Space and we spoke about there being someone who is hired as the main person or team for it. We are thinking about ways of bringing people back and how they can run it or come in a few days to talk about what they’ve done, but it’s all in discussion at the moment.

How I got involved in the first place was knowing there was going to be a 3D printer and wanting to learn how to use one. I have mostly made things in there that has been for my work, but I have made other things that then come into my work. If you look at the entire 3D printing community at large there is a lot of printing for the sake of it, because why not? I always suggest to people just try it, at some point it will fit into your work at a later date.

I was always very artsy, I got it from my mum. I did art at GCSE and A Level, it was the only subject I actually wanted to do, all my spare time went into doing art. At A Level I had a really good art department that was very open, you were free to do what you wanted. I did a Foundation Diploma at Leeds Arts University. I started doing sculpture at A Level and then in my Foundation I started doing other things, but in the end I knew I would go back to sculpture. My course leader in my Foundation recommended Wimbledon. When I visited Wimbledon there was such a lovely atmosphere, it felt like everyone wanted to be there and was doing things they wanted to do.  It’s smaller and like a family here, everyone knows each other. Alistair in the Maker Space, photo by Nadine Froehlich

My practice is always constantly changing, when you think you’ve nailed it, it starts to change a bit. If we are talking about right now, I am a bit obsessed with Betty Boop at the moment. She started out as a dog in ‘Coco the Clown’. If you look at the old cartoons they are really sexist and racist, it is remarkable that she has survived so long. There are so many interesting facets to her that remain relevant. Right now as a character she has no agency, she can be on a little girls back pack and it can be really sweet and innocent, but then she can be tattooed on someone’s back with some booze, cigar and a Gucci head band and it doesn’t seem out of place, because she has no agency. There are so many facets to her that makes me question, why is it like this? how has it lasted this long? I don’t want to make an issue artwork, it has manifested in Betty Boop for now and will eventually move along, but I think it is more of a personal perspective of my exploration of feminism.

I think it is a really weird sphere to enter as a guy, there can be a lot of tension around it. I think it is very difficult to ask a feminist about feminism when you are a guy and especially hard when you want to learn about it in depth and the theory behind it. Before looking at cartoons I was looking at vaperwave which was something that started out as a joke but then ended up as quite a serious thing, through this I found my way to cartoons because it relates to culture and cyclical nature of things. Someone on the internet said look how trippy this cartoon is and it was of Betty Boop which is where my obsession started.

What is very important to my practice is everything, I like to think, is nicely made. I write in my statement, there is a dichotomy of the perfect precision and the feelings of the human hand. I have this drive to make sure that what I make is always made nicely. 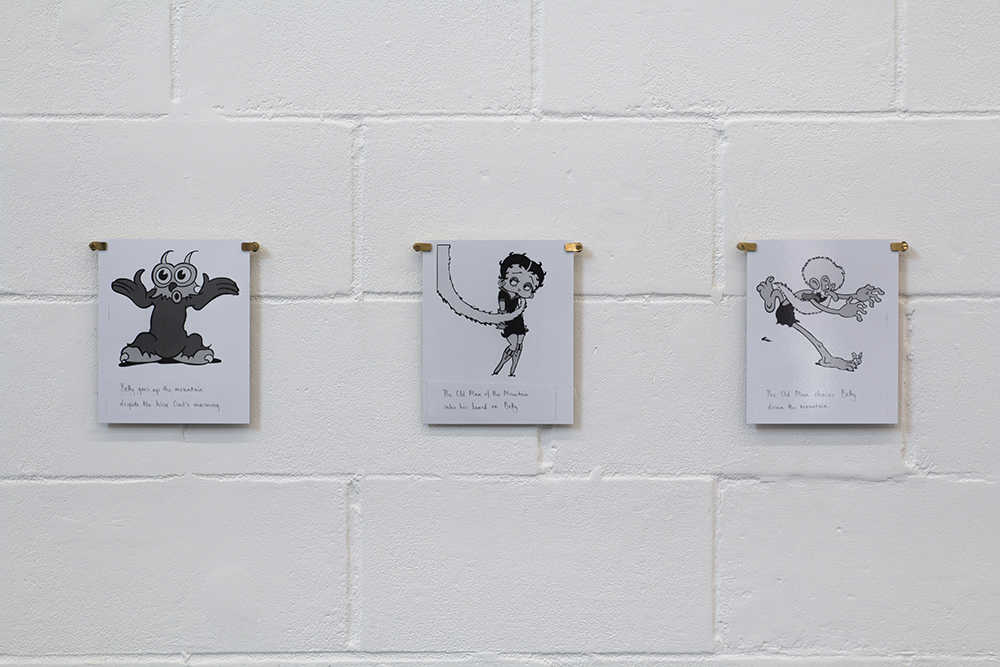 Please tell us about your final pieces for the summer show:

In Sculpture I feel like it’s the idea that you have to have one big final piece, but I am not a huge fan of that. I would rather I make lots of good pieces throughout the year rather than one big piece. I have eight pieces I want to play around with and will hopefully put in the show. If you see a reference to Betty Boop you are not entirely sure what that means and to have eight things hopefully they will start to contextualise each other and build a picture. You can’t just put up a sign and say Betty Boop is a very problematic character, because people don’t respond very well to being told things you have to try and show it. That’s what I want to show through my eight pieces. Hopefully through my work people will question a bit more about who Betty Boop is and perhaps a bit more about her history.

My eight pieces include some Betty Book perspex cut-outs, a projector that’s projecting Betty Boop, a video, a flag, a chess set where the queen’s face has been replaced by Betty Boop, a newspaper comic, a narrative set of three images and there is a banner which is every frame of the video.

As I am in Sculpture I know more about the work going on around me and there are lots of exciting stuff happening in Sculpture. For example,  Isis is making a breakfast room, I am not really sure what to call it but there is an avocado, some toast, butter and an egg all having a conversation in a room and I voiced the butter I think! There is Aron in sculpture who seems to have this magical super power where he can makes things because he thought it would be interesting and cool and he makes stuff that is interesting and always nicely made. 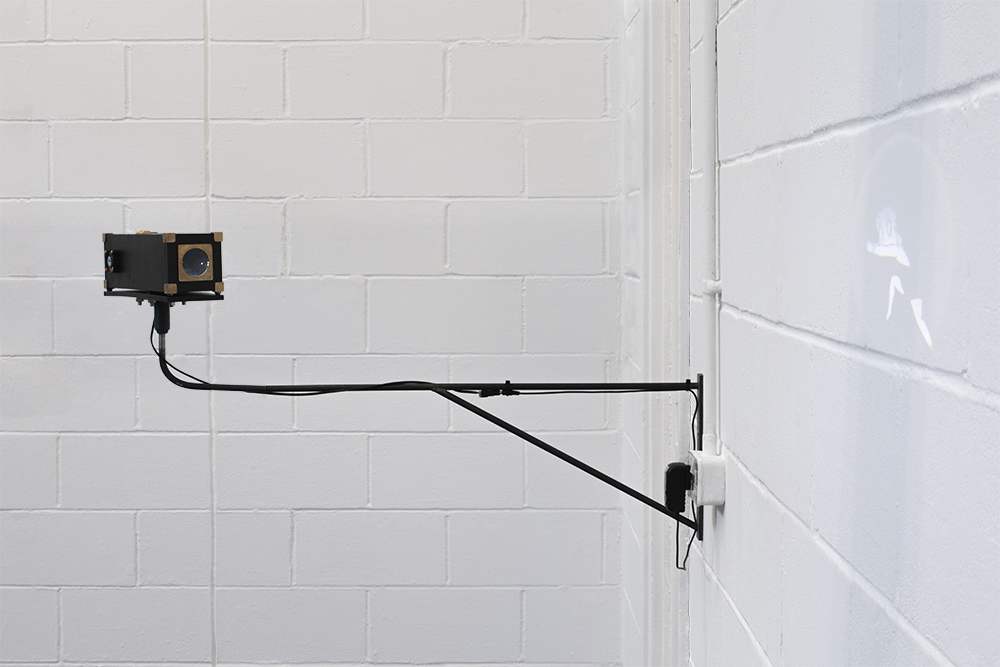 The Betty Boop projection set up in Sculpture’s space 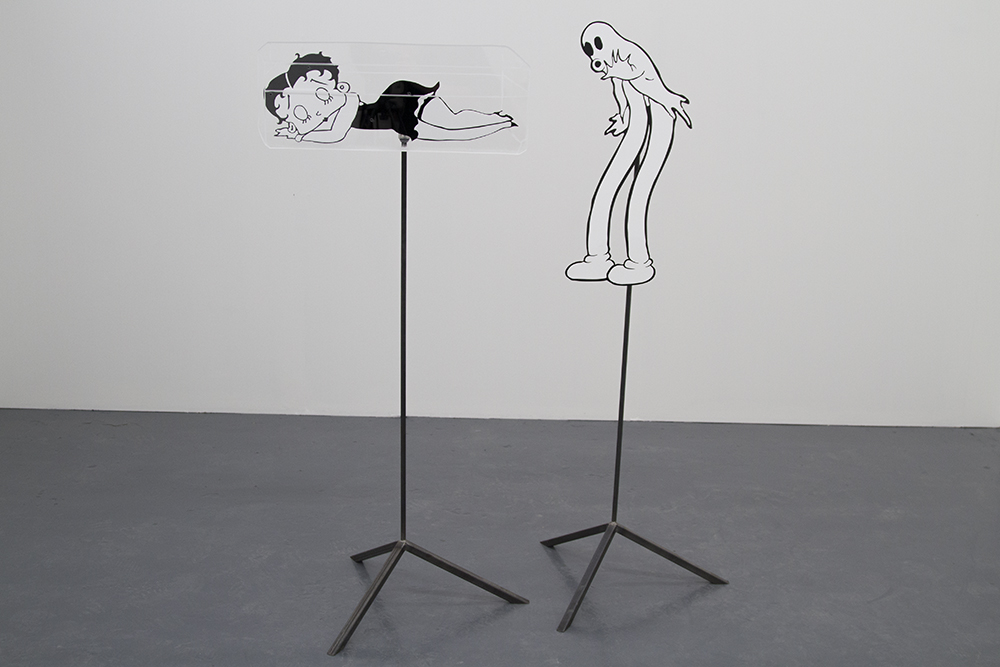 Betty Boop and Koko the clown, perspex pieces by Alistair

James Arland who was my tutor in first year and my tutor this year he has been really good and I will never forget my first tutorial with him. I was making shapes and I was exploring these ideas of negative space – the negative space was the movement of these hands that were cast and made them to look like stone. James said, “so its sexual then?”, I said, “no, no it’s not”. I think that was really good, because I realised you have to consider every potential reading, regardless if that’s what you were aiming for. You have to consider it and know about it. He’s also good at telling me stop and keep my work a bit more minimal sometimes.

In the 3D workshops Tyson has been really good because he has pushed me to have a little bit more finish. We have the Maker Space which has a 3D printer, I found out about this space and the 3D printer during the summer so I was already coming up with ideas to use the space. I was incorporating a lot of 3D printing and Tyson would say you know you could cast that in aluminium. He’s really pushed me to consider more of the material aspects. He has been great at letting me make the most of all the workshops and showing me how to use different machines.

I have a job, I work as a studio assistant for James Russell and Hannah Plumb, they invited me back after I worked with them previously. They both did Sculpture at Wimbledon and became designers as well as artists within sculpture. I have got accustomed to the workshops here, I would like to get my own 3D printer and laser cutter and do some casting somehow. 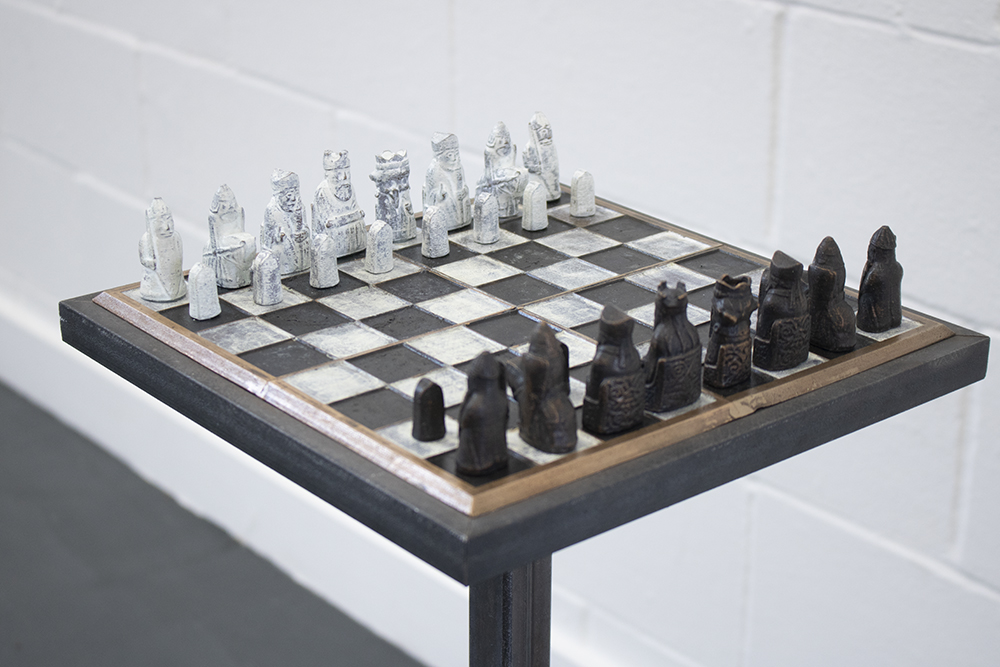 Alistair’s chess set, with Betty Boop as the Queen

You know, when you finish something and you are really proud of it, but then you look at it two weeks later and you start to see all the flaws in it. In a way the next project is always the better one.

I have been increasingly valuing the technical aspects of the work and that’s been a steady increase the whole way through, but I think something that does really stand out is the first time I touched on feminism. I have been looking into the literature of Mary Wollstonecraft, she was Mary Shelley’s mum and she was a bit of a badass! Mary Wollstonecraft did cants and wrote, ‘A Vindication of the Rights of Men’, they are books that no one has really heard of, but she knows what she is talking about and she is really smart. It was weird discovering someone so obscure who shouldn’t be so obscure.

I love the way Robert Gober and Alex Da Corte present some of their work and that has really stuck out for me. I like what Fiona Banner does with language.

It does not matter what course you are on, use the workshops. If you have never welded and you will never again in your life, learn to weld anyway. Wimbledon is really good with the workshops and they all work so well. Not only does it make your work better, it also benefits you because you learn all different technical skills that can maybe get you a job in the future. 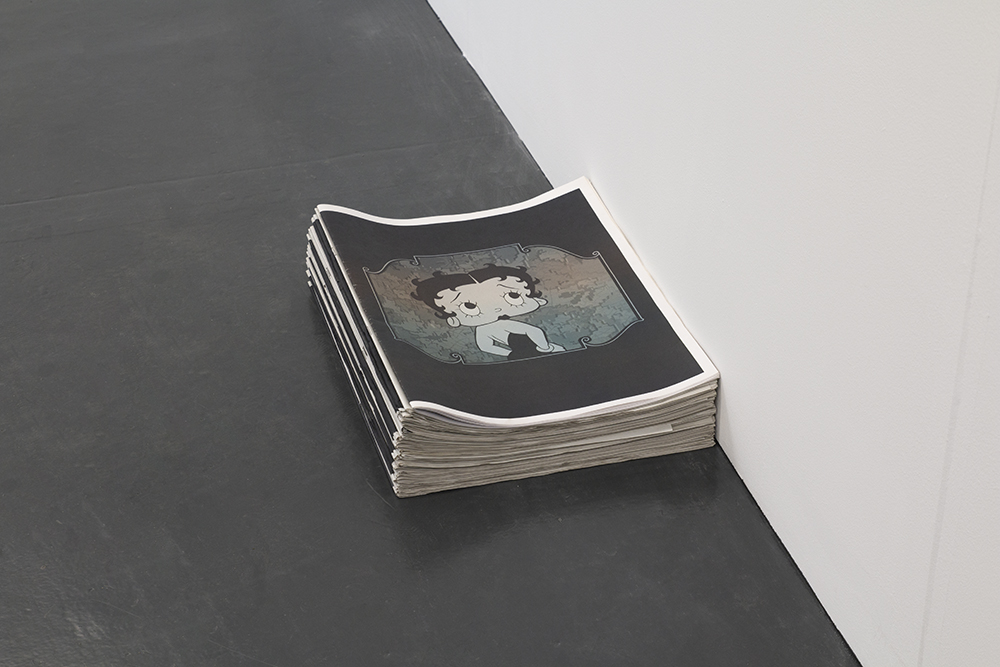