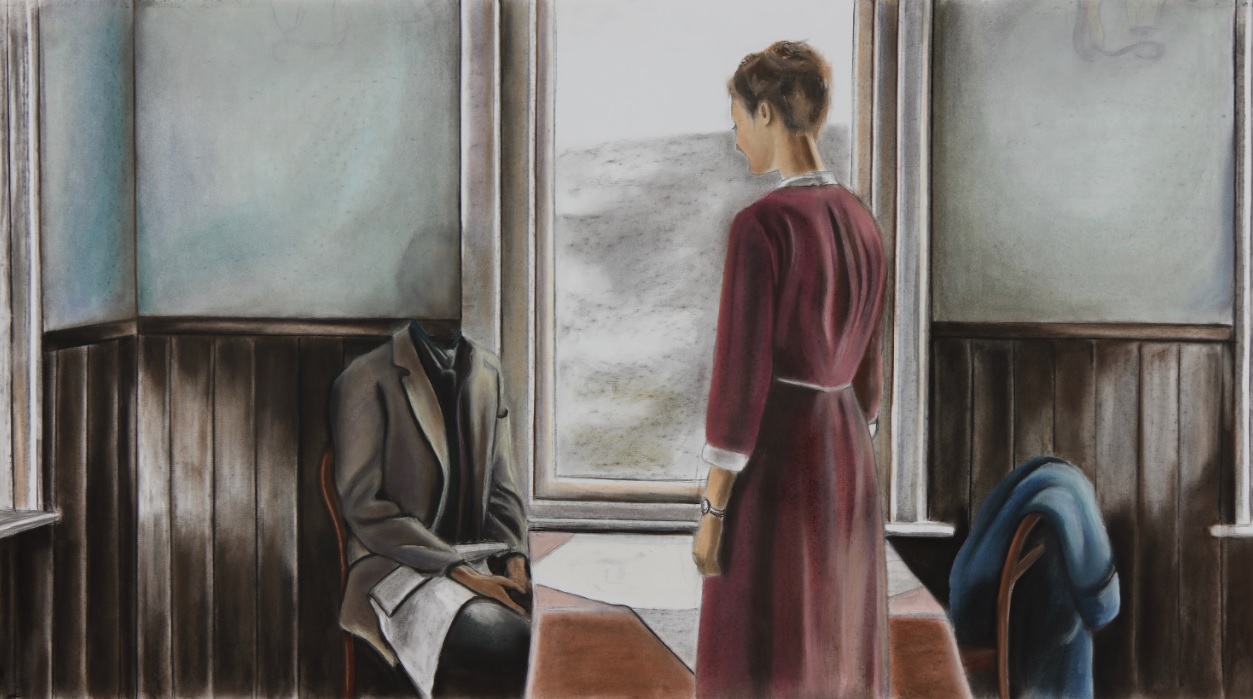 Ellis Scheer is a graduating MA Drawing student and practicing artist, whose work uses drawing as a tool to question what it is that makes an image ‘filmic’ and explores what happens when a film still is taken out of its narrative context.

We sat down with Ellis in the lead up to the MA Show to discuss how she ended up studying the MA Drawing, her fascination with film and the cinematic image and the installation she will be exhibiting at the Show.

Can you talk a bit about your background and how you came to study the MA Drawing?

I’m originally from The Netherlands, near Amsterdam. My parents have both always been quite creative, my father is actually a magician, so I grew up around art and theatre. I completed my undergraduate degree in fine art in the The Netherlands and that’s where I started drawing, mostly with pastels. I had a year off after my undergraduate degree, and then decided to do a master’s. I really liked London as a city so I did a little bit of research and I saw that they had an MA Drawing course here at Wimbledon. I really liked the course because it has a basis in drawing, but it’s not restrictive, so students have the opportunity to move away from traditional drawing. 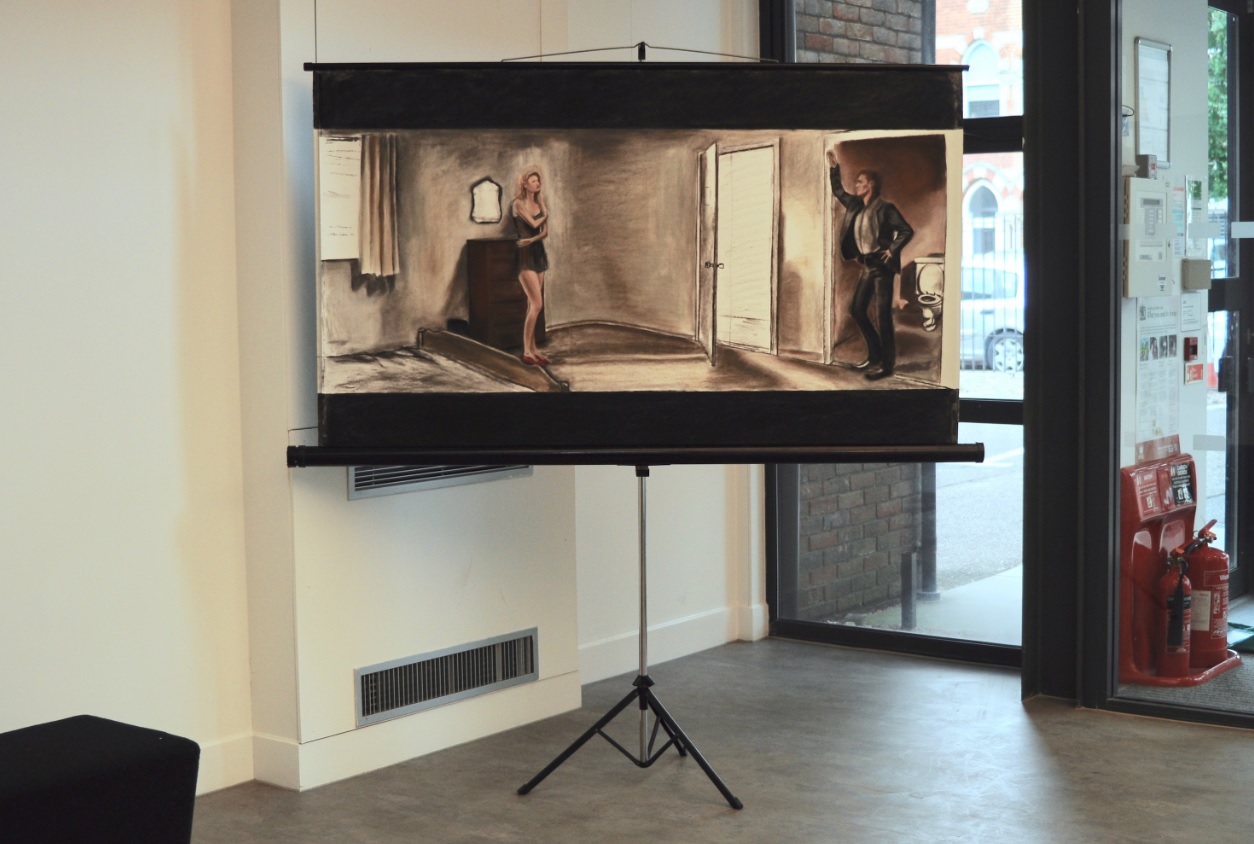 Can you tell us about your artistic practice?

I mostly make drawings of film stills; screenshots of moments that I find interesting. I go through the archive of these stills to find images that I would like to draw from, and then I make large pastel drawings and installations. I’m always looking for moments that hint at a moment before and after the one that they depict. Other than that, I’m looking for interesting light, composition and interactions between characters. When the stills are extracted from the films, the images are open to more meanings because they are no longer defined by the narrative of the film. Many of my recent works have featured an anonymous man and a woman in a domestic setting having some sort of interaction with each other. The mise-en-scéne around the characters has also become more important to my work, so for my latest work I’ve decided to re-create a cinematic space.

What work will you be exhibiting at the MA Show?

I’ve been doing some research on theatre and how it compares to the filmic image, and I wanted to introduce the real-time aspects of theatre into my work, and to take the filmic space of the drawings back into the third dimension. I created an installation, and I thought it might be nice to have people moving around in the set. At first I thought I might do a performance, but then I didn’t really like the look of it as it referred more to theatre instead of film. So instead, I came up with the idea to have scenes from films projected onto the set.

I chose older movies from the 1930s and 1940s and I’m making a compilation of scenes from several films, exploring the same themes of my drawings of a man and a woman in a domestic space. I’ve tried to evoke the cinematic space as much as possible in the installation with the dark walls and the letterbox-style frame. The partition walls were built by the technicians and I made the letterbox structure. I also borrowed a stage, a curtain and some seats from the Theatre Design course. 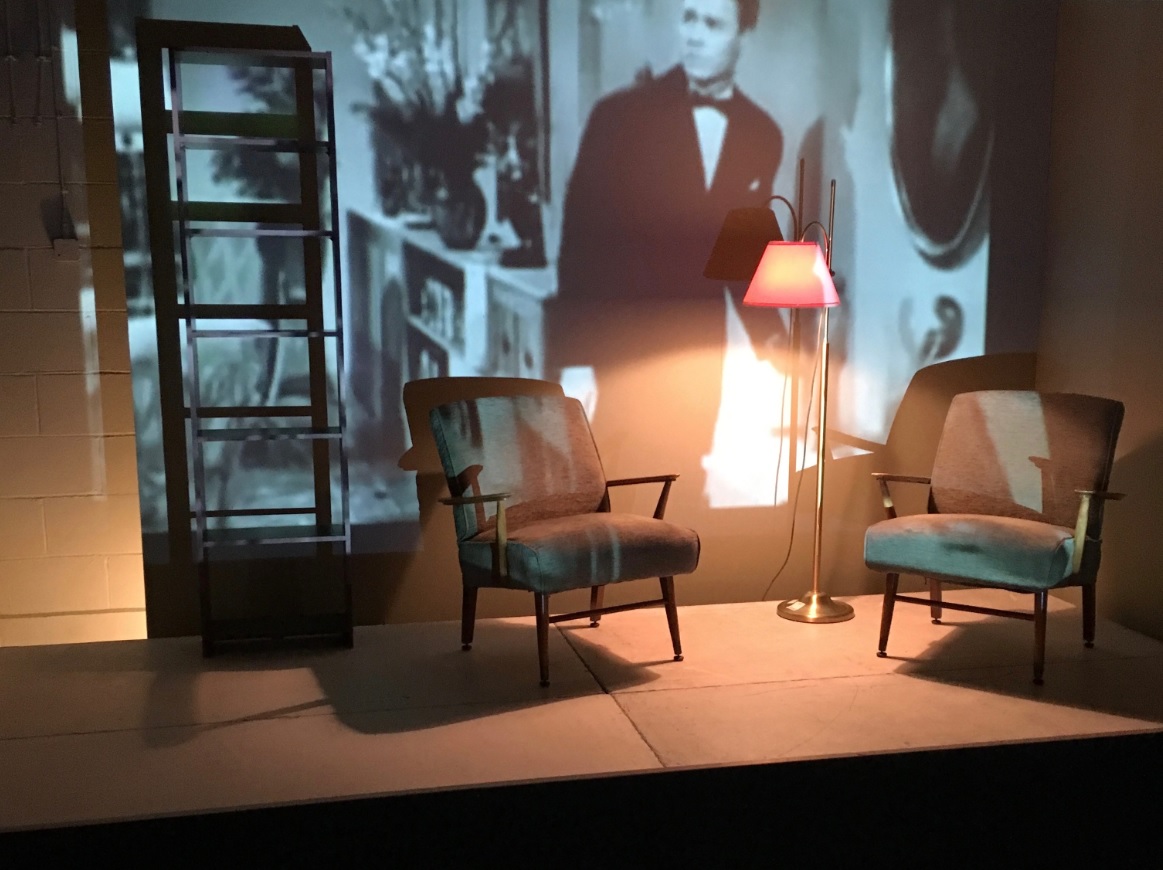 Who are some of your artistic influences?

Lately I’ve been making a lot of drawings from David Lynch films because I like how he works across both film and fine art, blurring the boundaries. The painter Edward Hopper is a big source of inspiration for me as well.

Do you have an MA Show must-see?

I’d say Jo Lane, who is also on the MA Drawing course. She makes beautiful work focusing on hair, and she’s creating an installation with around six of her drawings, a photograph and a sculpture.

What have you enjoyed the most about the MA Drawing course?

When I first started the course I was quite surprised, because on my undergraduate course I was constantly being questioned about what I do. That’s still present here, but I feel like I’ve been taken a lot more seriously with my practice, and there’s no doubt anymore about whether or not I’m an artist. I also like how much freedom you have on the MA Drawing. ‘Still Cinema’, pastels on paper illuminated by a projector

What’s next for you after the course finishes?

I’m not entirely sure yet! I’m moving back to The Netherlands, so I’m going to try and explore the Amsterdam art scene a bit. I’m also looking into doing some residences abroad.

You can find out more about Ellis and her work by visiting her website and following her on Instagram.