Arriving at OBS on Friday, 25 August, I found all of my supplies waiting for me. I had ordered in advance from JPP and Intaglio. The studio was extremely well equipped but I was glad to have my own inks, tissue, and newsprint.

Although originally I was a bit scared to be sleeping upstairs from all of the fumes, once I opened the door to the upstairs balcony (also a great place to dry blotters and laundry), the breeze comforted me. From the balcony I could see out along the River Gilão to the central bus station on the left, and to the right, the greenery as the city dissolved into open country. By night, the river lit up with lights from the station, contrasted with the deep dark of the water.I was immediately inspired by the different colours of light and the darkness and began to create Mono-types on a piece of plexiglass I had ordered. 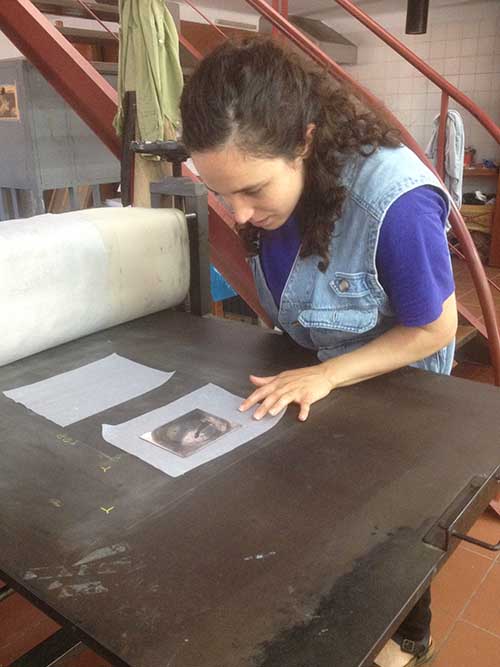 Yael printing during her 2017 residency

At first, I tried monotyping on top of spray painted surface, but it turned out that I could apply a layer of dark colour, and because I was working with water soluble materials, I could allow it to dry before adding another layer of lighter colour, and then printing the whole image. 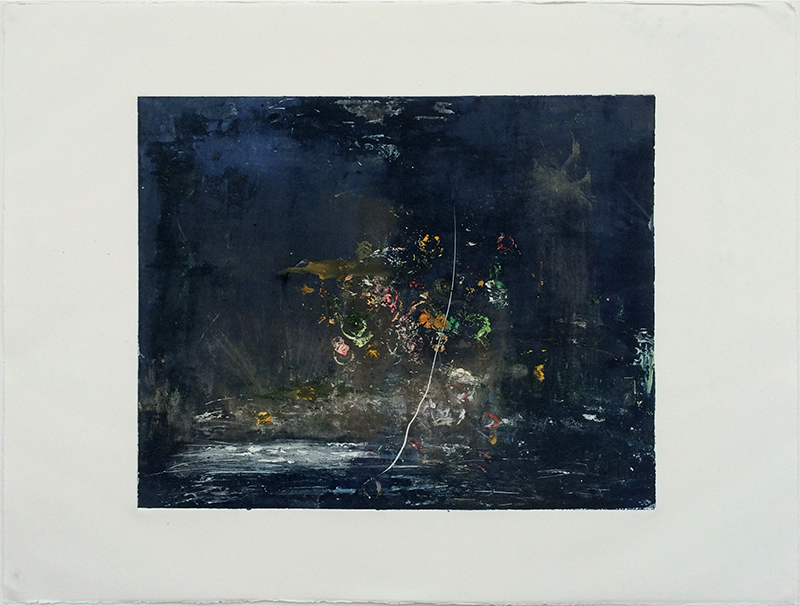 A Monotype print by Yael Roberts

The next day, I ventured out in the beating sun (after buying a ridiculously large sun hat) to the outskirts of town. Passing hordes of tourists and various attractions, I found a path that seemed to lead to nowhere, with dilapidated buildings on either side. I heard noises coming from these buildings, and I wondered it anyone still lived there.

On other afternoons, I wandered up the steep, cobble stoned streets into the old city, where I encountered empty churches and different clock towers, all calling out the hour out of sync.

Back in the studio, the sound of the clock towers kept time for me as I worked away. At every hour, multiple clocks would ring. At first, the sound was ominous, reminding me of how little time I had in Tavira. But as I got into the swing of things, the sounds became less ominous and more joyous, almost like a celebratory sound for the work I was steadily churning out. 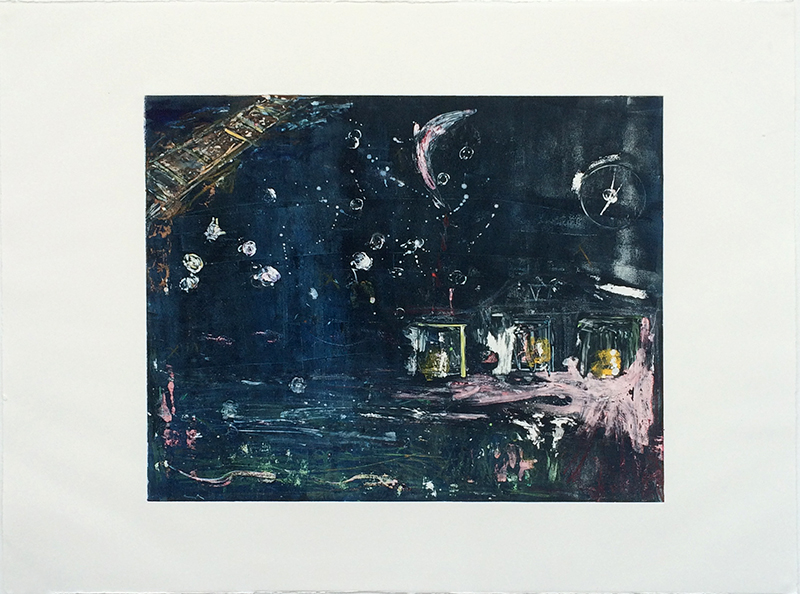 A Monotype print by Yael Roberts

In addition to the Monotypes, and some Drypoints I created from around town, I brought some small zinc plates. When Paul Coldwell arrived, he helped me edition these, explaining his 2-person method for editioning, which worked very well. Paul and I reflected on my work, my future, and it was useful to hear his advise on different techniques. 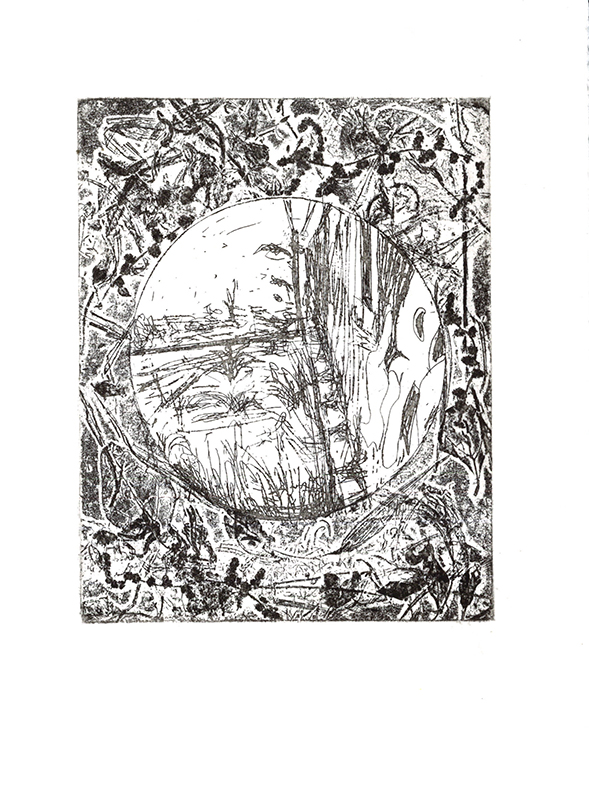 An etching by Yael Roberts

Meanwhile, always curious about my surroundings I had found some old wood in the studio. I spoke to Margarida, the studio manager, who told me I could go for it. Luckily, I had brought with me some perfectly sized Japanese paper in a roll, which was great for hand-printing from these pieces of wood. In the week and a half I had left, I had no choice but to carve into these pieces of wood while they were still wet, in order to print new impressions with new forms. I was able to see my love for printing from found wood, which I had spent most of my time at Camberwell doing. It was clear to me when I returned to London that I would want to continue working with relief printing from found wood. I went as often as I could to the beach, where the water was a perfect temperature. Unfortunately, something bit me, and I spent a day in bed recovering from a swollen arm, and then began printing with my left hand, which worked just as well. Whenever the studio became too much, I would take my plates to the local cafe, Mandala, which became my favourite spot in town. With a wonderful collection of books, interesting vegan snacks, and delicious coffee, Mandala was a great refuge. The communal vibe was created by the owner, who spoke to me every time I was there (and even remembered Luke from 2016), I truly felt at home. Other than Mandala, it was hard finding food to eat as a vegetarian, so I mostly would take my suitcase to Pinco Doce, the local supermarket, and stock up on fruits and vegetables and 6 packs of bottled water. I also discovered a new art gallery at the bottom of the street, which was only open after 10pm. It was great to be able to take the time in the evening to also look at different work and how it was curated.

I had forgotten how joyous a residency can be: the feeling of waking up and descending the stairs straight into the studio, so much space to create my work, choosing music to play on the speakers, and endless space to think, consider, reflect and plan. Before i knew it, it was time to go, and i spent my last day cleaning and packing. Paul helped me by making a custom box for my prints, which I hauled over to the post office for quite an expensive price, but was relieved to find them waiting for me upon my return to London. I hopped in a taxi back to Faro airport, and as the smell of the sea faded away, my time in Tavira seemed like a dream, with only my prints to remember it by.