Every autumn, Topolski Studio runs the Chronicle Residency Programme to engage young artists interested in reportage drawing with documenting current issues and events around London. Started in 2013, it is a three-month programme continuing the legacy of Feliks Topolski, who published his own Chronicles of the Century between 1953 and 1982. Acting Dean of Camberwell College of Arts, Amanda Jenkins, sits on the board of trustees of Topolski studio, and has nurtured a growing relationship between the two institutions.

In an exhibition opening next week, Camberwell Space Projects will be showing outcomes from the 2016 Chronicle Residency which focused on the theme of ‘Britishness’ with six artists including three graduates from Camberwell College of Arts: Marguerite Carnec; Jon Dixon; Emma Guareschi; Charlotte Reeve; Daisy Saul and Chloe Wyatt – examining what this term means in the shadow of Brexit. One year on from making the work, which draws on the shifting politics, people and landscapes of London, from Pearly Kings to Drag Queens, the exhibition asks: how has London changed?

Here, Topolski Studio’s Education and Outreach Officer Laura Fitton explains the background for the residency, and asks some of the artists taking part what role reportage drawing has to play in relation to reflecting the political climate.

Laura Fitton: The aim of the Chronicle Residency Programme was to make work rooted in current political realities. The act of drawing on location at protests, political landmarks and places of social injustice came from concrete political impulses.

Art undeniably played a huge part in the recent 2017 snap election, as artists, illustrators and designers rallied round creating posters, reimagining various brands and creating visual media to engage young people with politics again. Ultimately the role of political art is to challenge that specific audience’s beliefs by making strong work that makes people “feel” but also reflect. Art can be a powerful tool to communicate with a specific audience in the ever-changing political landscape we find ourselves in.

The personal is political, after all, with everything you experience and observe in society leading back to politics. This exhibition is a space for encouraging conversations about political issues, using visual observations as a starting point. “Rather than focusing on party politics I found that through observing and drawing people in lots of different situations and various walks of life I was gaining an insight into why people behave the way they do and how this has been shaped by political events happening locally, in the UK and even internationally” artist Charlotte Reeve explained. The idea of the microcosm is key in reportage, and grounds these sprawling topics by linking them back to the people affected by them. 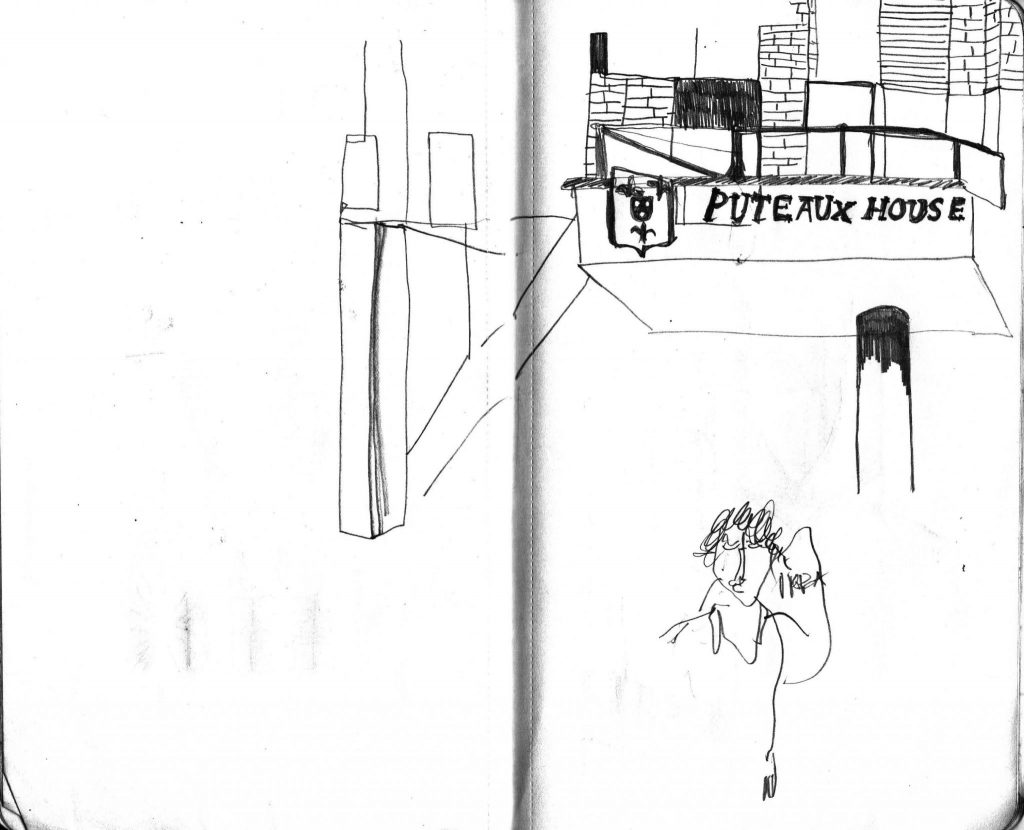 Charlotte and Emma Guareschi both covered the refugee camps that have come to be known as ‘the Jungle’ in Calais as part of their personal projects, from both an inside and outside perspective. “I think the reason I make political work is a personal matter that’s to do with where I grew up,” said Emma, who is from Calais. “Calais has been a gateway for refugees to get to the UK for the last 20 years. I’ve witnessed social injustices and racism towards refugees from a young age, first with the arrival of Kosovans, Kurds, Afghans, Iraqis and more recently with Eritreans and Sudanese. The issue of borders has interested me for a long time.”

Drawing on location as reportage can be challenging. However, for artists such as Emma it is a valuable approach. “The act becomes quite automatic; you’re trying to capture everything going on around you which makes it perhaps, at the time, a less ‘consciously thoughtful’ way of making art. Sound, weather and crowds all affect the drawings in ways you often only realise after the fact.”

“I’m interested in the rapidity and sometimes erratic act of drawing as reportage but more specifically I’m curious about analysing the work afterwards, finding links between the work and the context of your surroundings, feelings and the political atmosphere of a certain place or time.”

In 2010, Gordon Brown was ridiculed by the Conservative Party for his emphasis on the term ‘Britishness’, which they saw as form of identity politics. However David Cameron’s reign embraced the term, with a new spin. Did the notion of a British identity possibly led to the beginnings of the devolution of the United Kingdom? It’s a flaky and seemingly unstable term, which makes it an interesting topic for making work and this was one of the reasons why it was selected as the theme for the 2016 residency. Much of the work produced by the residency artists used the insights offered to them through the process of reportage drawing to investigate what after Brexit, ‘Britishness’ has become.

“I’ve come to realise that since the Brexit vote, Britishness and our understanding of identity is more important than ever to some, be it a social, political or cultural identity” said Chloe Wyatt. “There’s a feeling of trying to pin down what being ‘British’ means today, and “protecting” and “preserving” it, and questioning what the futurity of ‘Britishness’ is.” 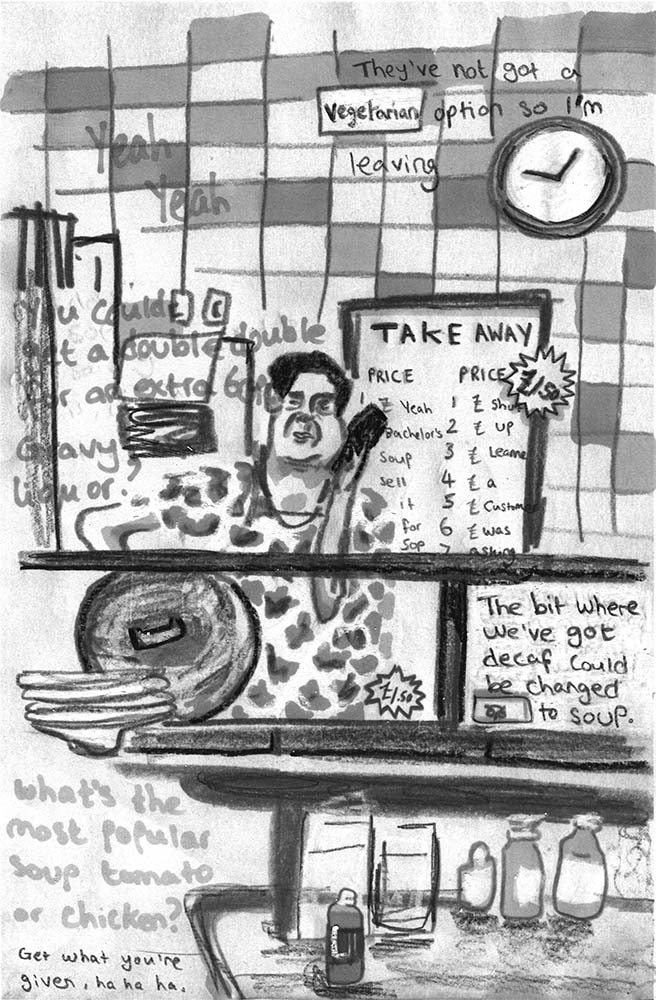 “Politics is this big mass of confusion and chaos that can be hard to decipher. Art as the ability to cut through the chaos” added Daisy Saul. “Making a drawing takes time and provides an element of intimacy with the person, people or place being drawn. The experience therefore offers the artist, subject and audience a different perspective to that of more commonly used photographic reportage. Because drawing is not always taken as seriously as other reportage mediums, you can do all sorts of interesting things with it! As artists and reporters we have a powerful tool to capture intimate events.”

In this new post-truth age of social media journalism and distrust of the mainstream media from both the left and right, perhaps reportage can bridge the gap between the two, bringing a human element back into social documentary. For Chloe, the power of reportage illustration lies in the act of drawing itself: “Drawing is capable of holding vast amounts of memory and facilitating a dialogue between the artist and the viewer. The physical action of drawing gives the artist time to work things out, both in terms of creating the work but also their opinions on the subject they are depicting. I like the way I can be honest and direct with my reportage drawing, and empathetic and sensitive too – something that photojournalism and photography can’t always offer. I want people viewing my work to feel they are part of a dialogue and not simply being presented with an image. Reportage drawing happens there and then in the moment, amongst the event, inside the news story or just stopping to show the everyday – it feels alive.”

Find out more about studying BA Illustration at Camberwell on our course page.

This exhibition is part of part of The Big Draw Festival – the world’s biggest celebration of drawing.