Camberwell’s Postgraduate Summer Show starts on Friday 15 July and we’ve met with some of the graduating students to share their views about their final project. Here, MA Book Arts international student Fei In Leong tells us about how she made a series of etchings for her degree show.

Fei In is originally from Macao, China, she focuses her practice around the study of Liminal space. She explores the relationship of form, surface, and space composed of three approaches: grid drawing, Pythagorean theorem and the Deleuze’s notion of the fold. 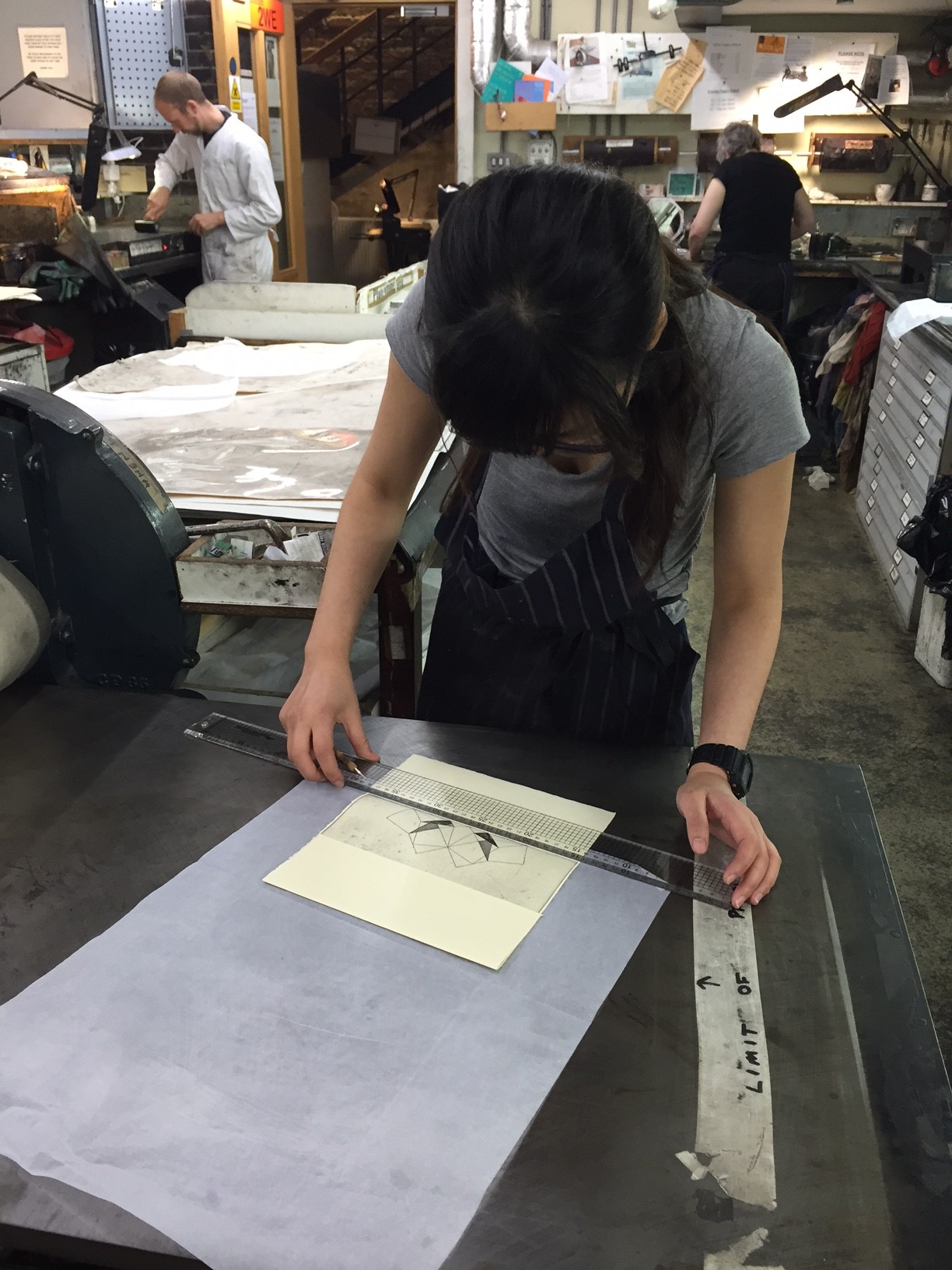 Fei In during the process stage 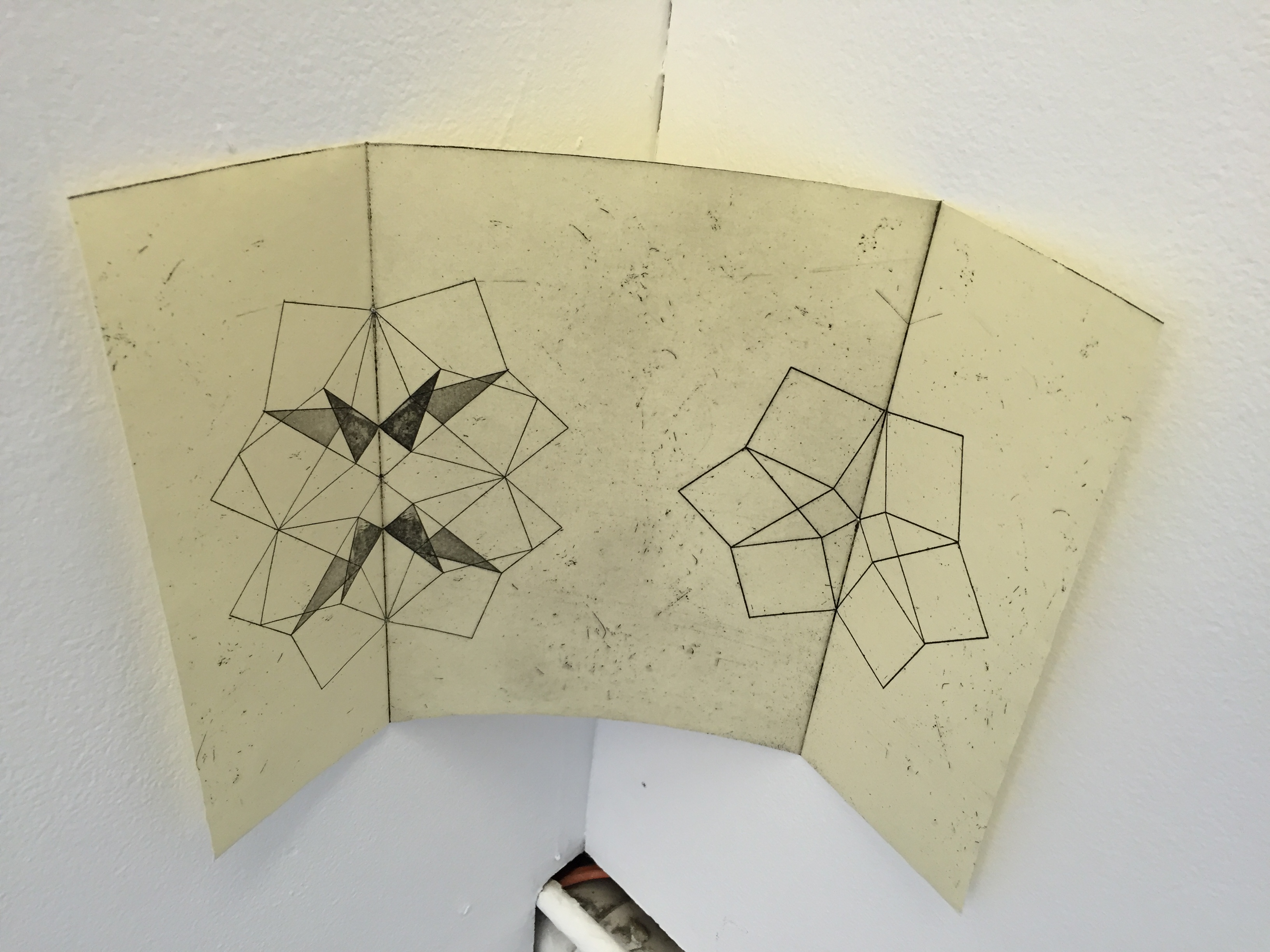 Work by Fei In Leong

Tell us about how you made your degree work:

I made a site-specific work for the degree show with a series of etchings I had previously made during Unit 2. I combined this etching with other materials such as tape and salt. Initially I planned to make a floor piece with salt because I love the idea that a piece of work can only be experienced first hand, in person.  Later on, when I first visited the venue I found out that there are a lot elements that you would not normally see in a standard exhibition room such as a basin, pipes, lots of plugs, a grid floor full of paint, etc.  I realised that I needed to adjust my plan as I wanted to make use of those elements, bringing the uncertainty into my work. It was challenging, but I think my work has the possibility to push for more ideas. I used a combination of printmaking, stencils and wall drawings using tape and this is how I made it…

First I visited the venue, gathered the elements I needed and took some measurements. Secondly, I made the prints; some of which I had made before as I thought they suited this project, and some I made specially for this venue, also, I made the stencil. Thirdly, I looked for other materials to finally move my work on-site. Fei In making her piece on site 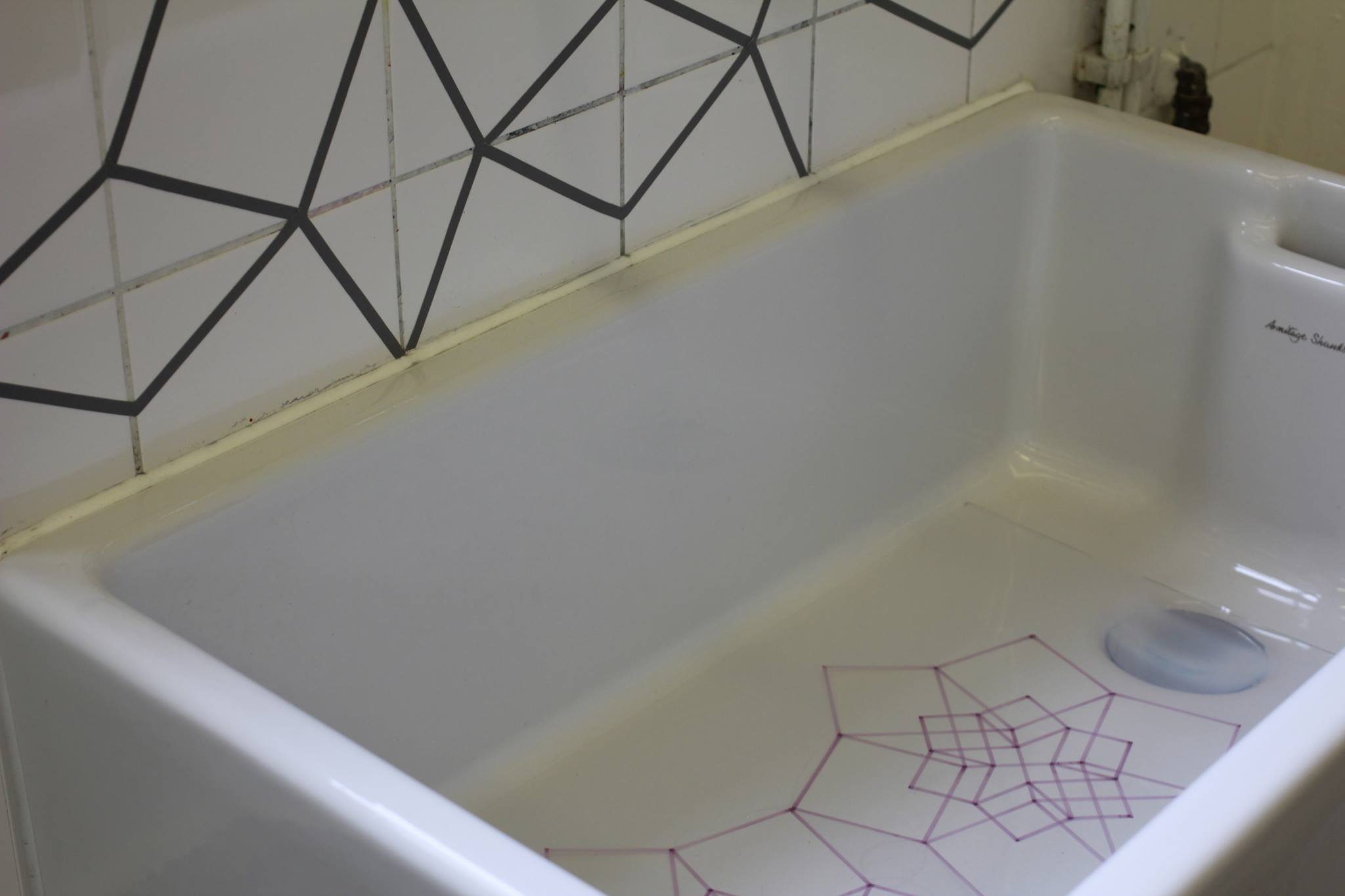 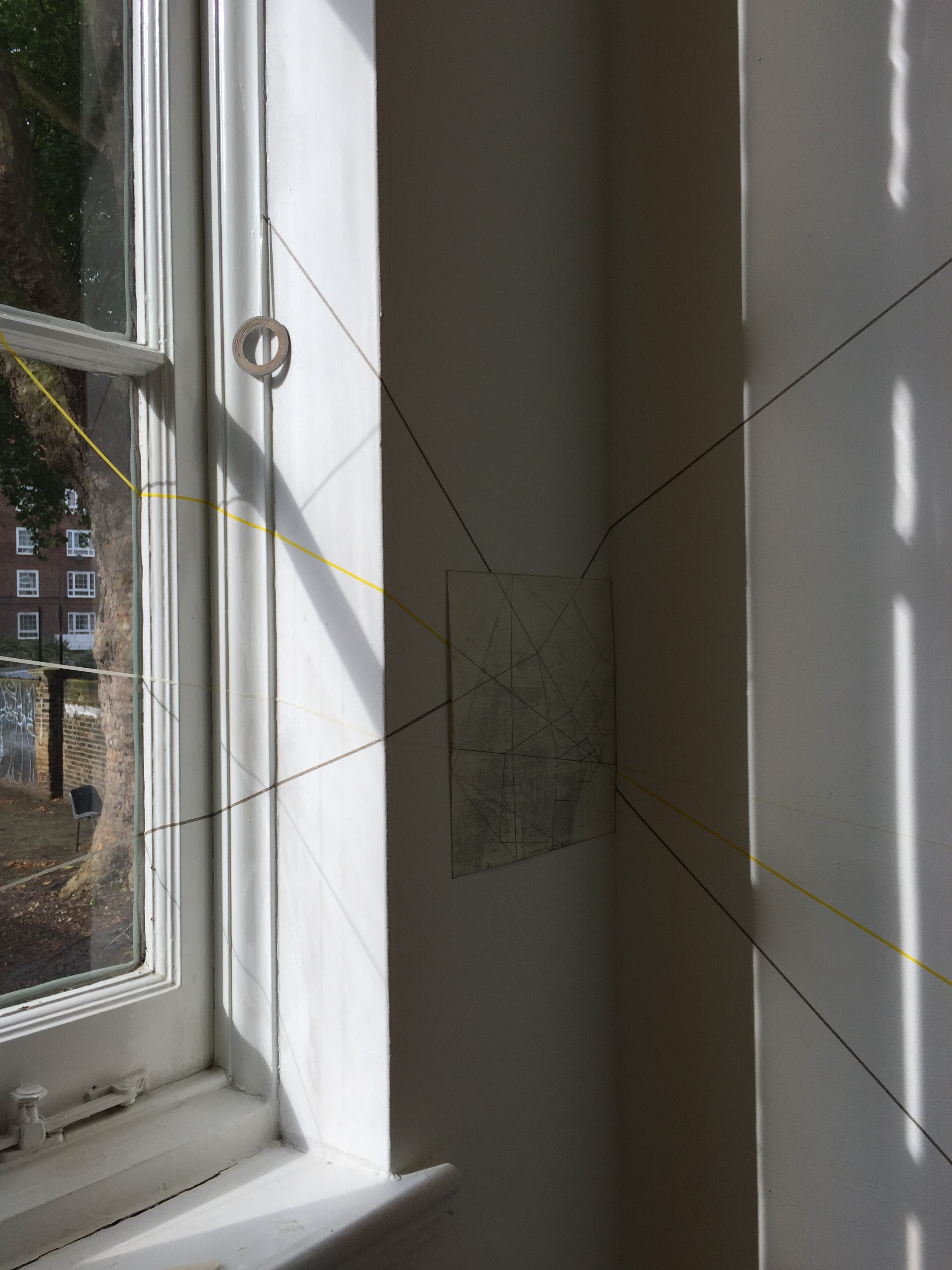 Work by by Fei In Leong

Most of my grid drawings are etching on zinc plates, I like how the line stayed on the surface; which map the physical quality of the surface onto the surface of my image. The piece Double Fold is a photopolymer printing. A modular origami is made and unfolded and then captured in a scanner. This explores the sculptural quality of a two-dimensional unfolded paper as well as the concept of refolding at the same time.

For the wall drawing I used tape because it is easy to get, flexible, and slightly comes out from the wall surface which echos the architectural elements in the room. It was in front of your window(1)(2) are made from salt because it comes from the idea that the salt in my body is separated from water and that water might be the rain dropped in front of your window last year. It’s about the idea of Karma in two individuals. ‘It was in front of your window 2’, by Fei In Leong

Everyone does a lot of planning for their show, but things will never follow the plan. I myself kind of enjoy this uncertainty, you know when you’ve done it, it is quite an accomplishment. Make sure to test everything very well before going ahead and you will less panicked! 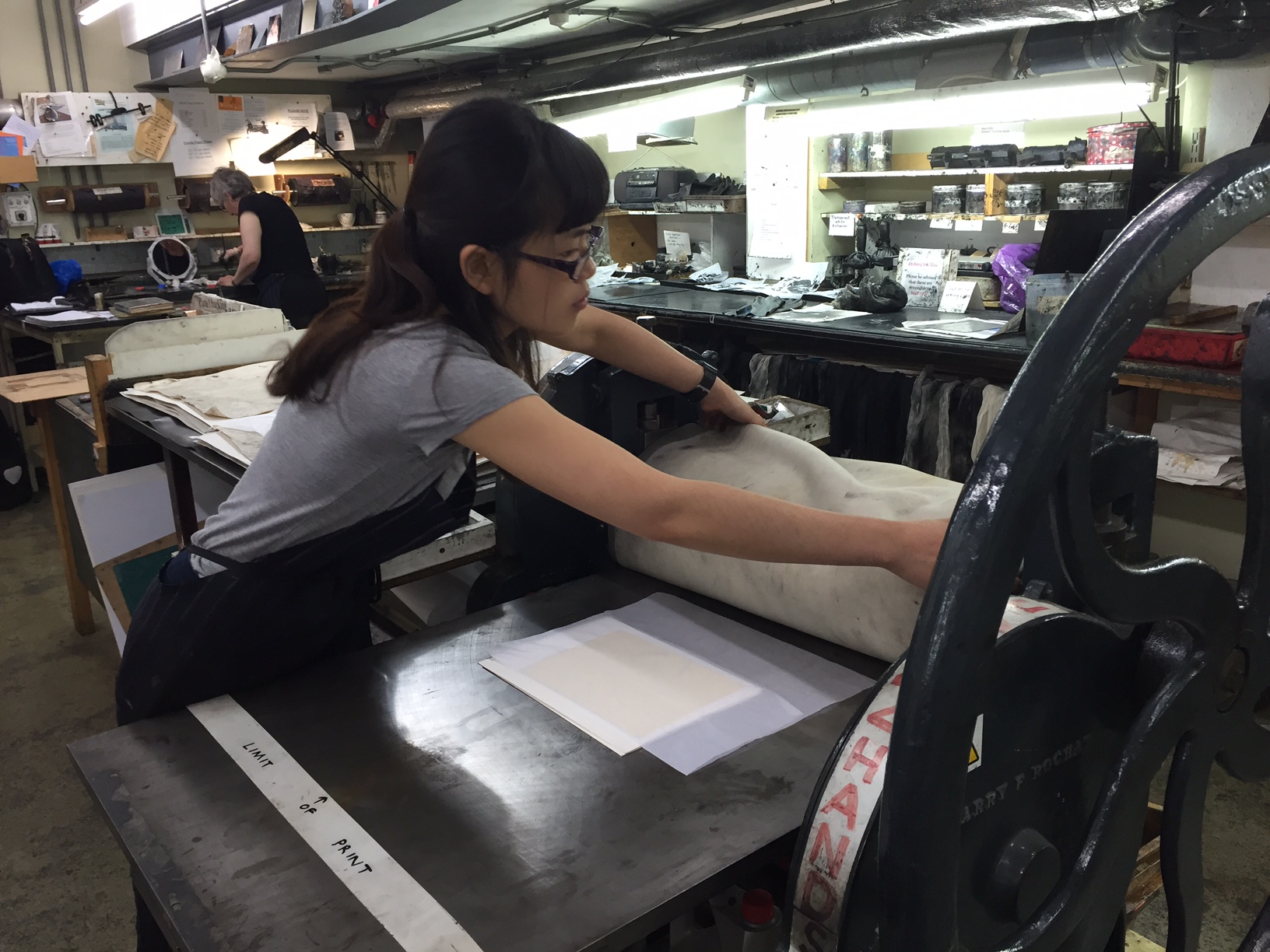 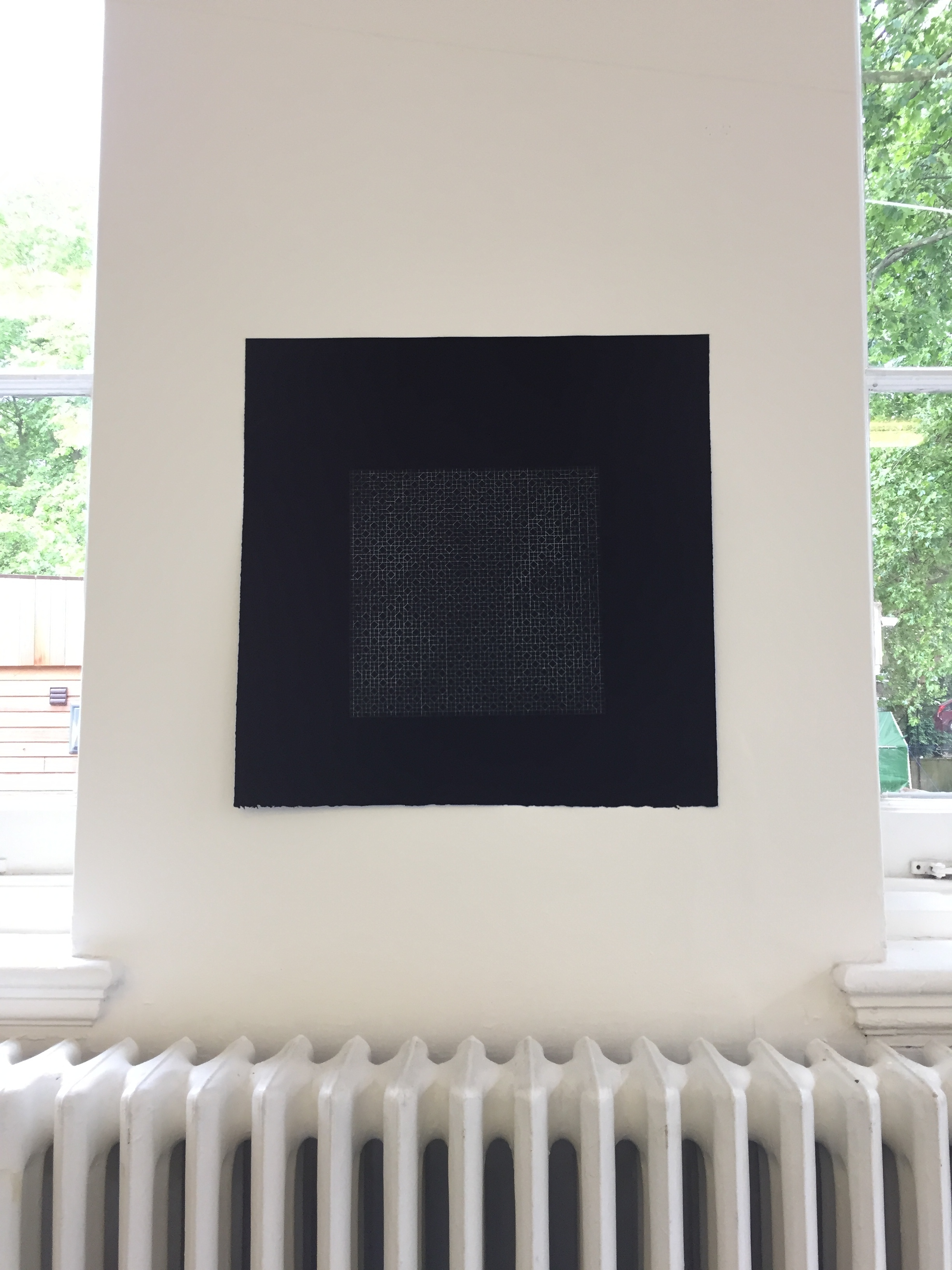 Installation view by Fei In Leong