We interviewed one of our talented technicians at Camberwell, Jonathan Armistead is part of the 3D Workshop Support at the college.

At Camberwell we have a number of 3D Workshops which are open access to our students once an induction has been completed. 3D Workshops at Camberwell include a foundry for mould-making and casting; ceramics with a working area, plaster room, glazing laboratory and kiln room; wood which includes a band saw, a table saw, a belt sander and tools for joining, cutting and forming; plastic includes a laser cutter, a vacuum former, a 3D printer and tools for cutting, joining, and forming; and metal includes welding, metal guillotine, enamelling kiln and tools for cutting and shaping.

Jonathan Armistead is one of the 3D Support Technicians who is on hand to help. Jonathan is from Winnipeg, Manitoba, Canada, he moved to London in 2015 on an Ancestry visa. He has been working for Camberwell College of Arts as a 3D Support Technician since January 2016.

Jonathan’s background is in sculpture and 3D work. He went to a High School in Winnipeg that offered both academic and technical learning. While there he took as many creative courses as he could and came out with a goldsmith certificate. Jonathan became and is still very much interested in design and making. After High School he went on to study BA Sculpture and Ceramics at University of Manitoba, followed by a three years MA in Pittsburg in Visual Arts at Carnegie Mellon University. 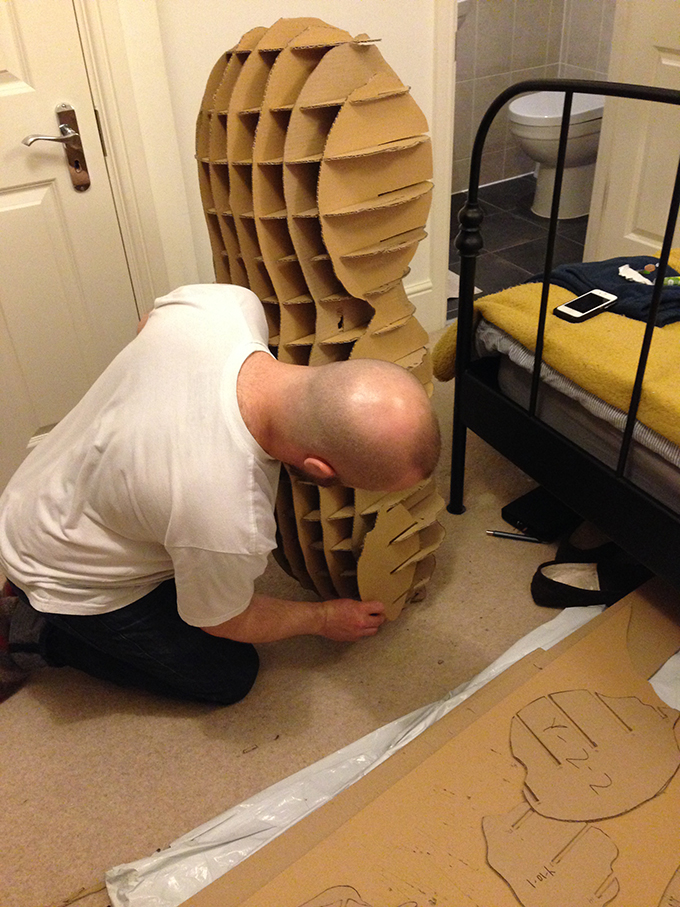 Putting the deconstructed pieces back together to form a peanut

Jonathan was already living in Peckham before he began work at Camberwell. He loves South East London; he found it’s an artistic community full of makers and varied artists. Jonathan attends a knitting club on Monday nights in Abbey House Pub in Peckham called Wolly Mondays, which is just one of the creative things he does in his free time. He sees himself as a creative artist who also knits, bakes; making creative cakes, and someone who is always making. Before coming to Camberwell Jonathan volunteered at the Kiln Rooms, Peckham.

When he first started in Camberwell, Jonathan worked mostly in the Ceramics Workshop located at Peckham Road and the Plastics Workshop located at Wilson Road, but has since worked across all the 3D Workshops.  Jonathan has enjoyed being back in an Arts College, thinking creatively and being in a making environment. Part of his role as Support Technician is to be there to help, but Jonathan appreciates being able to investigate different processes with the students. Deconstructed pieces of a peanut 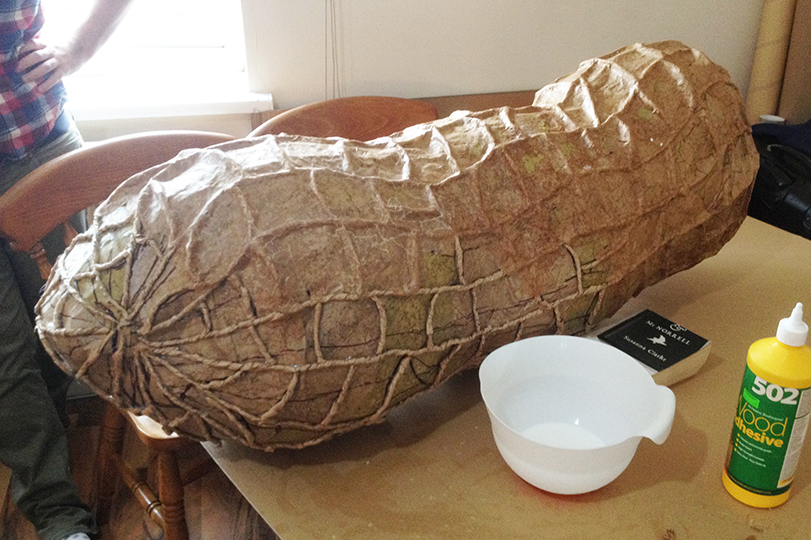 His practice outside of Camberwell is based in both digital fabrication and traditional methods. He makes 3D scans of work and then prints them, experimenting with the products of the print. Jonathan is currently working on gigantic nut sculptures which he makes using 3D model software; a nut is scanned in, then sliced up or deconstructed before he puts the nut back together and covers the model in a paper mache skin. He ideally would like to exhibit a number of different nut sculptures and call it “Wall Nuts”. Jonathan is now looking for potential spaces for his cheeky exhibition, including the arts venue, ArtsLav in Kennington. 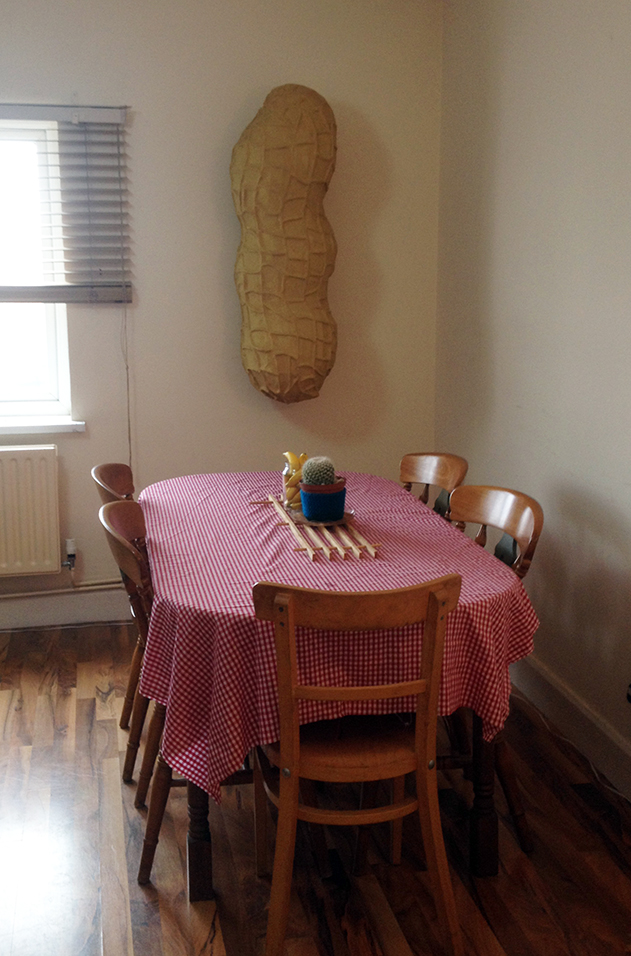 A “Wall Nut” – the peanut sculpture displayed on the wall 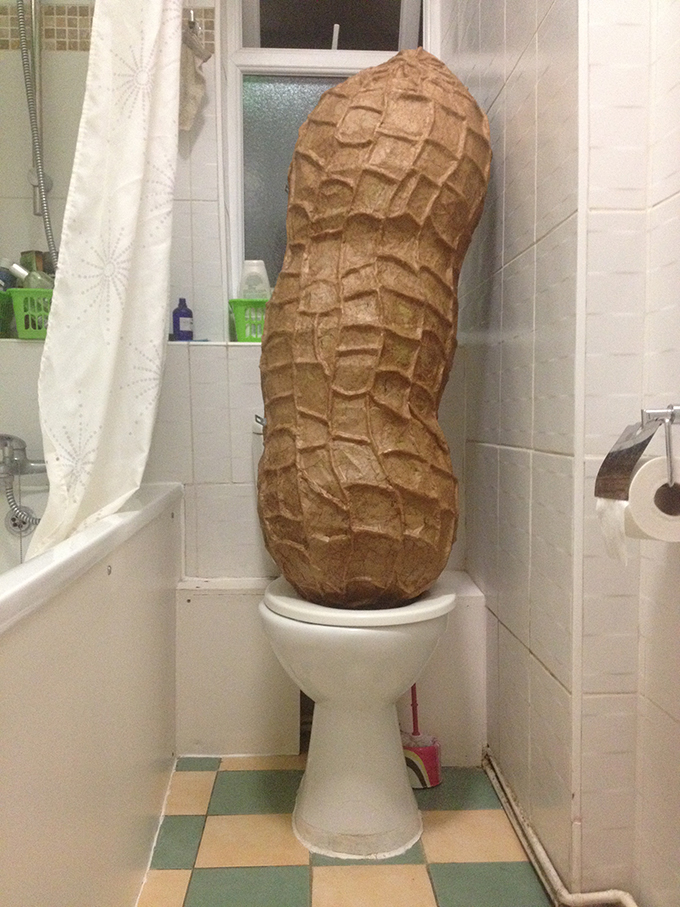 Jonathan’s cheekier side – the peanut sculpture on a toilet