Manuel Stehli from Zurich, Switzerland studied painting at The Academy of Visual Arts Leipzig, Germany 2010 – 2014. He came to Camberwell in 2011/12 as part of a student exchange scheme and joined the BA Painting course. Most recently, Manuel was awarded Winsor & Newton’s Artist-in-Residence Grant at Künstlerhaus Bethanien in Berlin and in March Manuel and another awardee of the Winsor & Newton Residency will put on a show.

Manuel tells us about why he came on exchange to Camberwell and his experience in London:

While at the Academy in Leipzig it became clear to me that I wanted to spend an exchange year abroad. Although happy with my situation in Leipzig, I felt a vague longing for fresh air. A good friend of mine had just come back from a year at Camberwell and couldn’t stop raving about her time in London. Her stories were probably the main reason why I applied to Camberwell, another was the fact that I hadn’t ever been to London, which only increased the appeal of the city. Not just London but England was a blank page to me. I remember writing my application and not knowing what to say apart from that I liked English music and Monty Python. Furthermore, my English was very bad at that time and I figured London would be a good place to change that.

My time at Camberwell was short but very intense. There is no doubt that the year in London was one of the most important ones, not just for my art practice, but also for whatever else there is in life. In my art practice I gained a lot from good and refreshingly personal talks I had with painting tutors such as Dan Sturgis, John Wilkins and Claude Temin-Vergez, as well as some of the students. I found the teaching in Camberwell quite different from what I was used to back in Leipzig, there students spend three out of five years in just one professor’s class, which may allow more focused working yet makes it harder to get hold of different opinions. Furthermore, it seemed like the discourse at Camberwell was more focused on subject matter. The question “why do you paint this?” had more weight there which was definitely good for me as I started questioning my somewhat romantic and naive ideas of painting. During the year at Camberwell I spent a lot of time at the National Gallery, mainly gazing at the early Italian Renaissance painters such as Piero. That experience continues to have a huge impact on my work. It is the Early Italian Renaissance painter’s sense of colour, form and space, that not only influenced me, but seemingly whole generations of London painters, some of which I found very interesting too. Finally, it was probably the overall atmosphere at Camberwell and also London, that opened my eyes for a certain sense of humour and lightness in painting. Speaking about his time after Camberwell and his practice, Manuel had this to say:

I went back to Leipzig and carried on studying for two more years after my exchange, and then after graduating my plan was to leave Leipzig at least for a while. I applied for a job as a studio assistant in New York, though ended up staying in Leipzig as the artist I was meant to work for changed plans at the last moment. A disappointment at first, the run of events turned out to be for the best. In Leipzig I was able to fully focus on my work without having to worry about existential problems too much, especially for the first one or two years. I didn’t really know what I was doing, so I debated many ideas and doubted my practice in general, however that time turned out to be essential for me in terms of becoming what you could call a painter. Before moving to Berlin, I lived in both Leipzig and Zurich for some time, took part in shows and tried to make headway on my work. For the past year I was given a grant by the Canton of Zurich which helped with the latter a lot.

Technically speaking my work is mostly about oil on canvas. Oil painting has proved to be a very suitable medium for my somewhat erratic way of working – it’s very forgiving in its own way. It allows me to take my time and to change a painting many times, yet it records every decision and leaves traces of every deletion. My motifs centre around landscape and the human figure. I often start with a detail from a photo or a screenshot, barely ever with a concrete narrative idea. It is through the process of painting that a tension or a balance between figures and objects emerges. Often my paintings change many times in the process before its elements find their place and shape. It is hard to tell when this point is reached as it has to do with a certain sense of silentness. I’m looking for scenes that might evoke expectations yet let them grasp at nothing on closer inspection, this nothing then gives way to more interesting things.

There are many people that influenced me, not least the above-mentioned Italians. In quite a different way, Leipzig school painters such as Neo Rauch surely made a strong impact on me during my studies at Leipzig. Recently, to name but a few, I’ve been looking at David Hockney’s older paintings a lot and, even more recently, at Marlene Dumas and Henry Taylor. I like the immediacy of their paintings. There are many others, not just painters of course, for instance some of Luis Bunuel’s movies have been at the back of my mind for years now.

Manuel is the second grantee of Windsor & Newton’s Artist-in-Residence Grant at Künstlerhaus Bethanien in Bereceiving the residency, what he’s been working on and what plans he has for it:

The process of receiving the grant is that a number of painting professors were asked to recommend former students for the residency. I was lucky to have been chosen by Professor Annette Schröter. In a second step a jury on behalf of both Winsor & Newton and Künstlerhaus Bethanien made the final decision, and there I was lucky once again!

I am very happy and grateful to receive the grant, it really offers all I could wish for. The huge and well lit studio makes even the largest canvases look small and allows me – along with the oil paint that is included in the grant – to paint without having to worry about space and material. Which is a very freeing experience, and one I am surely going to miss once the residency is over. Furthermore, Künstlerhaus Bethanien is a great place for the residency to take place in as it is packed with artists from all over the world, well networked and just a very friendly place in general.

I often find myself saying to people that I intend making the best of the residency – without really knowing what that even means, in any case, I want to spend as much time as possible painting. There are shows lying ahead so I don’t really have a choice anyway. Furthermore, I would of course like to carry on meeting people and getting to know Berlin. As I said, Künstlerhaus Bethanien is very well networked and it is also a part of the Winsor & Newton Grant to support the artist in terms of promotion and communication. I hope to be able to make use of this fact with regard to collaborations and shows to come. During my first days at Künstlerhaus Bethanien I built about seven or eight canvases, most of which were very large. I had many vague ideas but hadn’t come up with anything concrete to work on, I knew that all the new impressions would change my plans anyway. What I knew for sure was that I wanted to make full use of the spacious studio and to have a set of canvases at my disposal once ideas started to solidify. Since then I have spent most days painting, it turned out that I only had to start putting paint on canvas for new ideas to arise. I quickly ended up working on a number of canvases simultaneously, the new paintings have a lot to do with what I was interested in before Berlin. Yet with new circumstances and a few good talks I’ve opened my eyes in many respects and it has allowed me to experiment with new approaches. As a consequence of what I worked on before moving to Berlin, I have been painting life-sized or even taller people. It feels to me that, especially in regards to the human figure, size is essential. To put it simply it has been fun creating opposites of some sort.

It is for the upcoming shows that I have started looking at my work in a more conceptual way – the way the individual paintings inform each other has become more interesting to me. All in all, the very challenging atmosphere at Künstlerhaus Bethanien feels freeing, maybe less self-referred than what I was used to from before.

At the moment I am in the middle of working on a few paintings, most of which are far from being finished. Even though I’m constantly trying to picture them hanging in the gallery it is hard to make concrete plans at this point. I would like to show maybe three or four tall canvases and a few smaller ones, yet it is for both time and space to decide. The show is going to be together with Aneta Kajzer, the first recipient of the Winsor & Newton grant, whose canvases are even larger than mine, so it is going to be a challenge to pick paintings and figure out a hanging that suits us both. 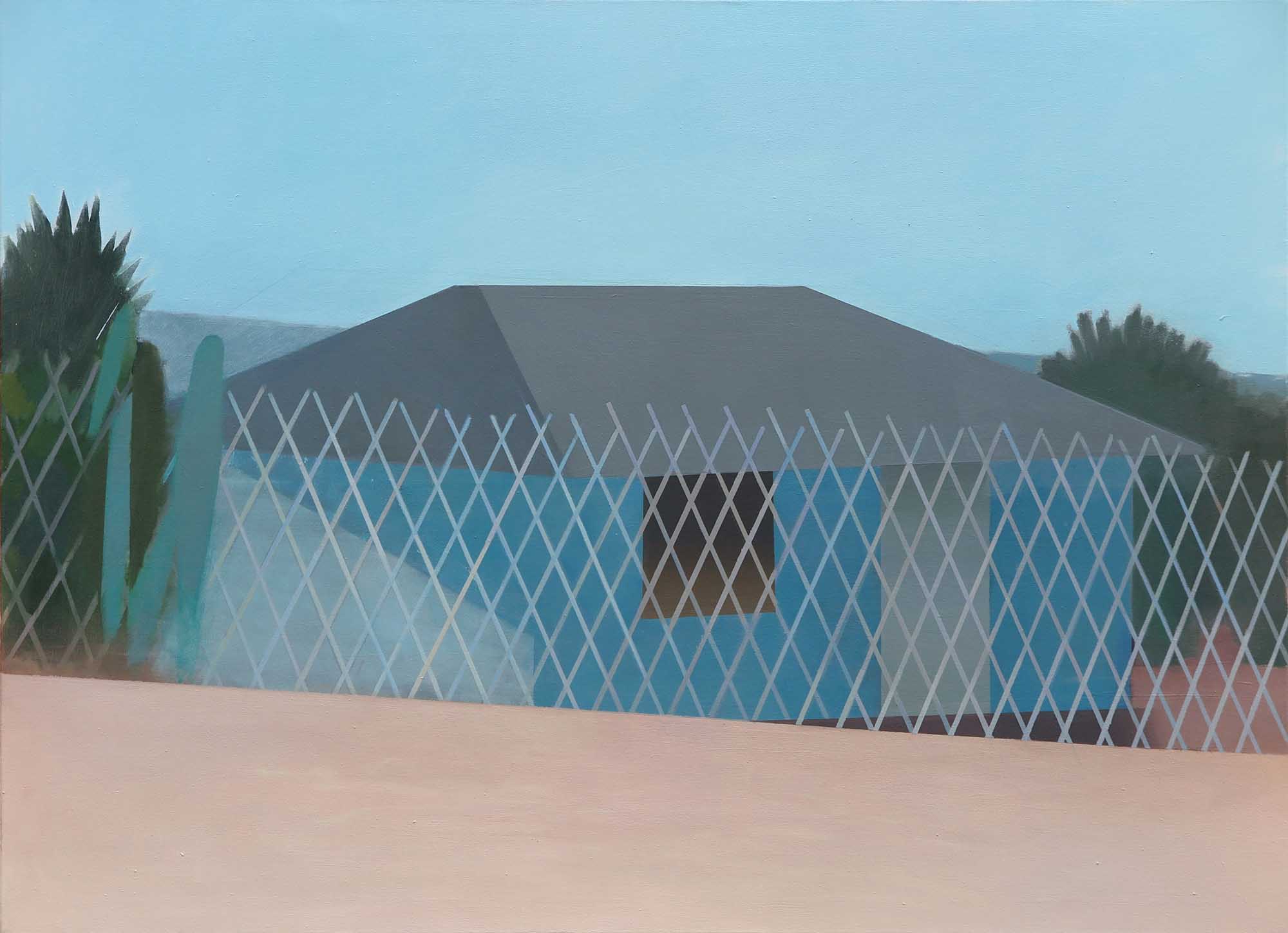 Finally, some advice for students who are thinking of starting a painting course:

Rome wasn’t built in a day, so don’t let the voice of the art market be in your head and the tight schedule at college discourage you from insisting on your ideas, no matter how strange or unfashionable they may appear. Also, make the best of the great printing workshops and other facilities at college, you probably won’t ever get a chance to learn how to do etching or lithography again. Finally, never forget your student card at home otherwise they won’t let you in and you’ll have to go back home to get it!