Assembly Point is a gallery space in Peckham that was opened in June 2015 by James Edgar and Sam Walker. As well as a gallery space, the building houses eight studio spaces which an array of artists occupy. We went to Assembly Point to have a tour and speak with the Directors James and Sam about the gallery, studio and exhibitions.

The building is fairly unassuming as you walk towards it, but once inside you are surrounded by a large, extremely well-lit gallery space with high ceilings. The gallery space was designed to have a number of lighting options, all of which have the ability to highlight pieces of work well. The eight studios vary in size, some slightly smaller than others but all have wonderful natural light and look and feel like great places to work. All the studio spaces are occupied by a dynamic range of practitioners including graphic designers, painters and sculptors. The building was built in 1833, and as years have gone by more additions have been made. It was at one stage in its life a community centre, however more recently it has been occupied by squatters for a number of years. The building was expensive to maintain which is why it was abandoned. There were suggestions to build flats on the site, however two years ago James and Sam acquired the building to house their high-end contemporary gallery and work space. 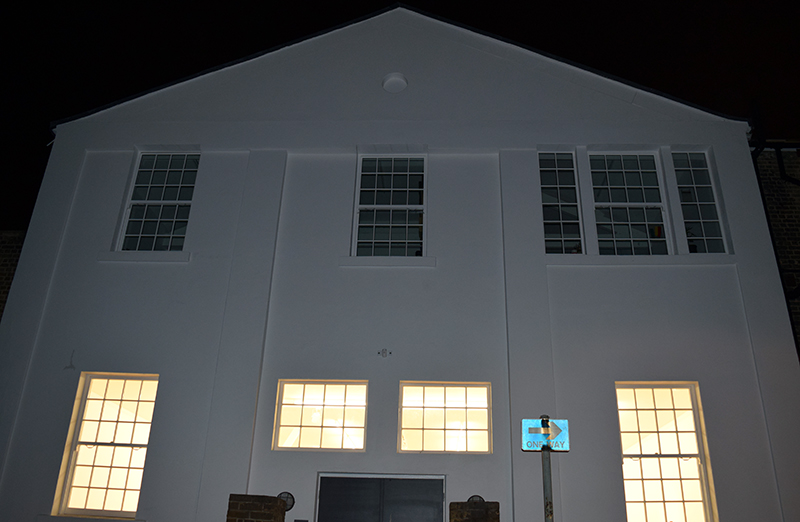 James Edgar is a graphic artist, he has worked as an apprentice and he is currently the letterpress technician at Camberwell College of Arts. Sam Walker studied a BA Fine Art degree at the University of Leeds, he has worked as a technician for galleries and freelance, and is from Peckham. James and Sam met on the MA Fine Art course at Camberwell College of Arts, which was then moved to Chelsea College of Arts. They worked collaboratively on their final show under the name ‘Edgar–Walker’, they found that the MA was a great place to meet and collaborate with other practitioners. They also learnt to let go of their personal attachment to their art and work and to think outside the art market, what influences there are. The MA taught them about the importance of exhibition spaces to provide context for artworks; creating a space to display their own work and the work of others appeared to be the next logical step. Sam’s background has had a profound influence in staying within the Peckham community, it is a rich and diverse area where creative practitioners live and work together. And so, Assembly Point was created. Or at least the concept, the name came a bit later.

Both James and Sam enjoy finding things, such as materials for their work that may be banal or overlooked, which is exactly how they found the name for the gallery and studios. Assembly Point is by definition a location designated as a place for a group to meet or for people to gather in an emergency. The gallery and studios can be described as a convergence of people in a space. While clearing out an electrical cupboard they found a sign explaining the assembly point in case of emergency. They overlooked the sign and the name Assembly Point for about six months, suggesting a list of alternatives, before finally deciding that Assembly Point was the right one. So far the exhibitions at Assembly Point have been group shows which have allowed James and Sam and the other artists to work with a range of practitioners. The programme they have already exhibited and would like to continue to create is one of a community, bringing groups of interesting and emerging artists together who can use Assembly Point as a platform. The programme for the next year has already been mapped out by James and Sam: there are plans for film screenings, installations, performances and events. They are looking to work with the local community and reach out to it, providing a space for and creating critical, relevant, diverse and interesting work. Assembly Point is not ready to define itself: James and Sam are interested in lots of different things and this is reflected in the artists occupying the studios and the programme for next year. The site is still being developed with plans for a café to sit next to the gallery and work in conjunction with the space.

While we visited the gallery, the exhibition ‘Mut Mut’ was occupying the space, the third exhibition the gallery has held. About 300 people attended the opening, including a mix of people who had been involved in or at previous shows. ‘Mut Mut’ is a group exhibition that explores the shift within illustration from the mediated form to the production of individual objects. The exhibition includes Camberwell College of Arts staff, curated by Undergraduate Design Programme Leader Darryl Clifton and Illustration Tutor Rachel Gannon. The gallery’s first exhibition was entitled ‘Back to the Things Themselves’ curated by James and Sam and also featuring their own work. They produced publications for this exhibition and hope to expand this area for the gallery. The second exhibition was called ‘Faith Dollars, Tax Free Imagination & Uptown Bliss’. This was curated by Marios Stamatis, a Camberwell graduate and one of the artists in Assembly Point studios. Marios is also an Associate Curator at Assembly Point.

When asked to give some advice to students, James and Sam had the following to say: Pay attention to the details, how you present yourself and the message you send out is important so follow everything up and remain professional down to the last detail. Also: be nice, there’s no difficulty in doing so. Only work with people you get on with! Don’t be afraid of failure and stick at what you’re doing; sometimes you need to give things time to evolve so see what happens. Finally, the more you put in to things the more you get out. London is a vibrant place with so much happening, go out and see as much as possible and get involved. 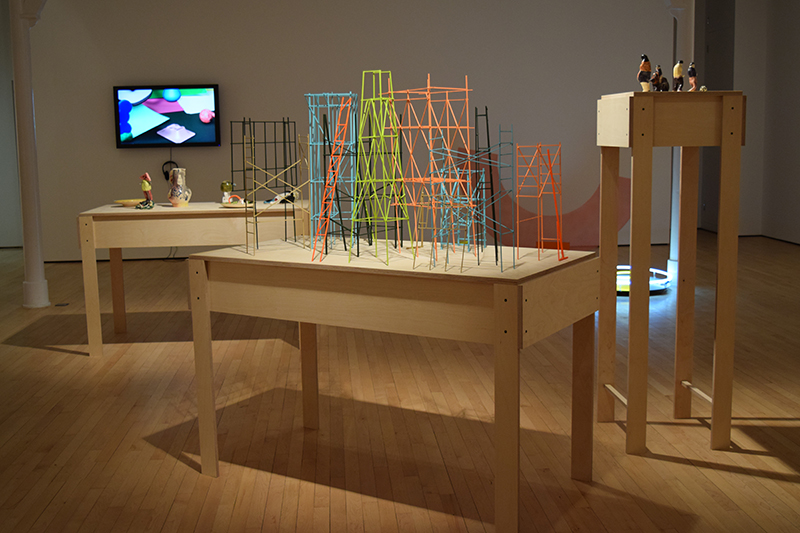 More about Assembly Point can be found on their website http://assemblypoint.xyz/About