Bauhaus 100: Students receive an expert introduction to the work of Josef and Anni Albers

Activities inspired by the teachings of the Bauhaus continued last term at Camberwell, as students and staff prepare to celebrate the centenary of the influential German art and design school next year.

In November, the BA Fine Art Painting course focused on the work of Josef and Anni Albers, two leading pioneers of twentieth century modernism who met in Weimar, Germany in 1922 at the Bauhaus.  Leading these activities was Fritz Horstman, Artist Residency and Education Coordinator from The Josef and Anni Albers Foundation in the USA who guided students through a week of workshops and crits as well as a trip to meet curators at Tate Modern,  which is currently staging the first UK retrospective of Anni Albers’s textile art.

At the beginning of his visit, Fritz guided a group of students through a lesson that had been taught to Bauhaus students at the beginning of their studies there, entitled The Matières (which means material or matter in French). Although more widely known for his work on colour theory, Josef Albers had taught the Matières course at the Bauhaus and later at Black Mountain College in the US to which he had fled after the outbreak of war. 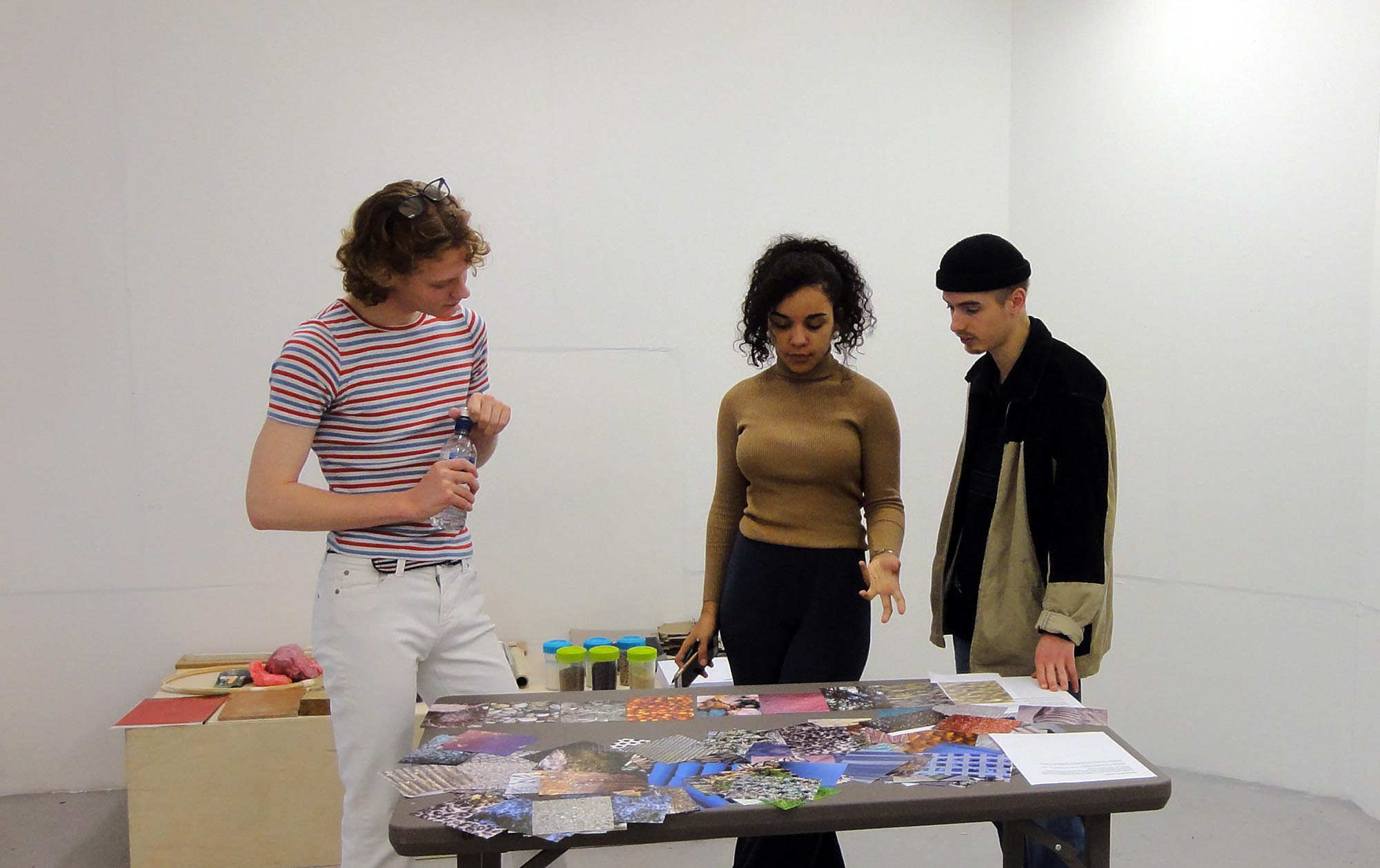 BA Fine Art Painting Lecturer Juan Bolivar explains, “The Matieres was a lesson or ‘module’ without strict limits other than, in Albers’ words, to explore “the inner qualities” [of materials]. There were no rules as such as to what the lesson was, but rather an attitude towards the discovery of material qualities. It asked students to consider rudimentary materials such as bits of string, metal wire, wood and paper, sand, tin foil and mesh; and to, what ostensibly could be called, ‘play’ with these materials, becoming sentient to the way they fold, ripple, feel, bend and move. The purpose was to be sensitive to the way a material or substance has a natural predisposition to behave in a certain way, such as the way sand moves around our fingers or the way a wire mesh’s can be manipulated into form by our touch.”

This lesson formed part of the Bauhaus’ ‘Preliminary’, which was the name given to the first courses that students would take when they entered the school. This approach to teaching, according to Juan, “formed the foundation of our modern education at art school; moving away from the teaching of techniques to engaging students with the idea of experience.”

In this way, these workshops served to show that the teachings of the Bauhaus were not just about materials or colour, but about how to consider the world around us through an experience of those things. In the words of Fritz Horstman, “the whole world is a Matières course”.

Juan continues: “In an increasingly digital age where tactility is often reduced to the flatness of touch screens, the Matières’ workshops are an opportunity to be sensitive, and a reminder that in our world textures exist and unfold as a language of relative and subtle experiences.” 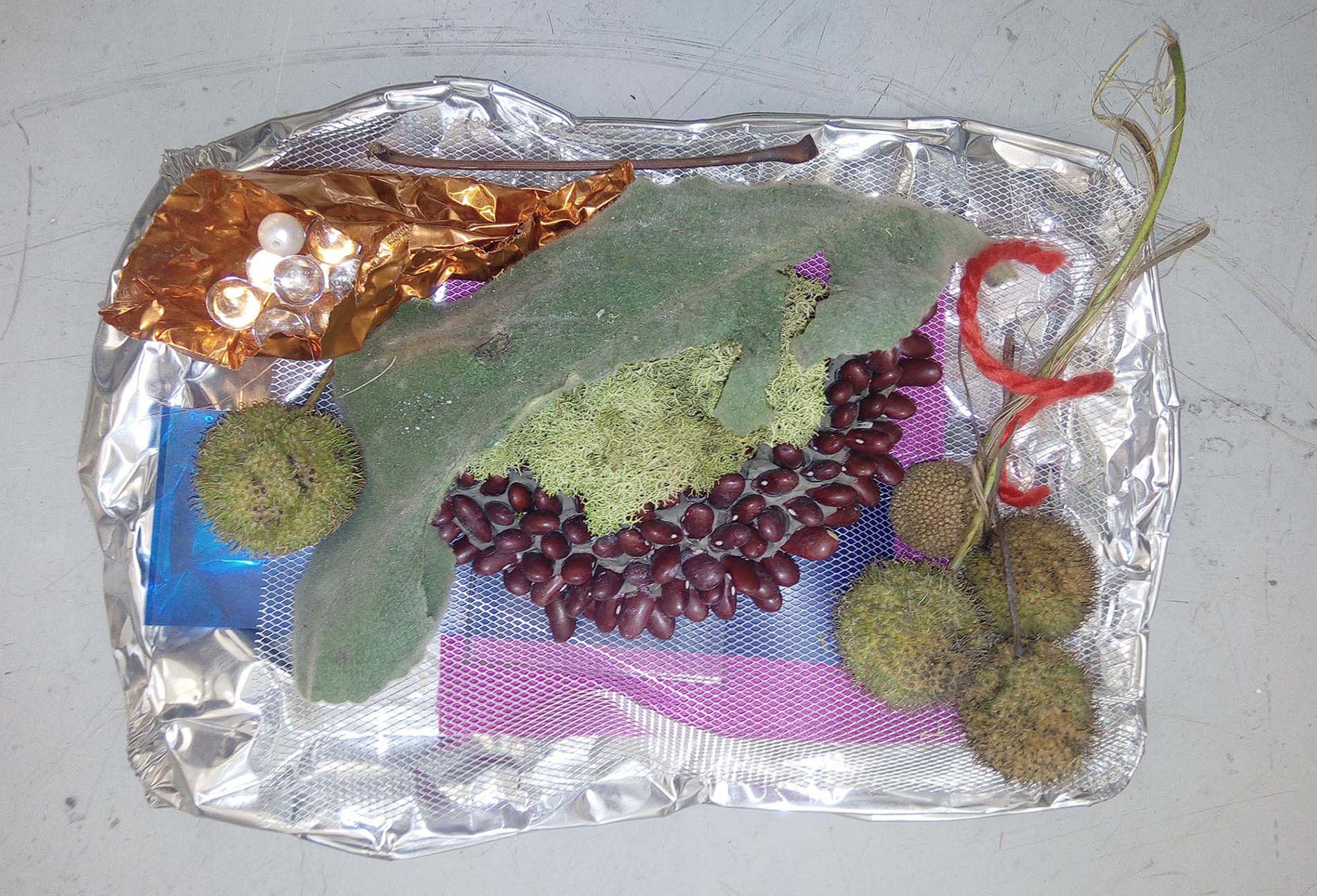 An outcome of the ‘Matières’ workshop. Photo by Juan Bolivar.

Meeri Paajanen, a second year BA Fine Art Painting student said: “The week gave me an insight to the idea of Matireres and how to use that as a point of analysis and research in my own practice alongside with the idea of play/playing as a part of the creative process. It was very refreshing to look at works and textures created that were not attached to a concept at the moment. Having a group discussions about the work created without the crit element was also a very welcomed and I wish we would have more of those kind of learning opportunities in UAL. The week was well structured with a working schedule and versatile, interesting content.”

The visit by Fritz Horstman also included a trip to Tate Modern, where students were given the special opportunity to meet the curators of the Anni Albers retrospective and receive a tour of the show.

During her time at the Bauhaus Anni had, like many women, been ‘directed’ towards the weaving department and despite the love and life partnership she shared with Josef – their practices often feeding into each other – in many ways she worked under his shadow even after they had moved to the US.

The exhibition is, therefore, an important recognition of her work says Juan: “The exhibition at Tate Modern provided a much awaited opportunity to acknowledge Anni Albers as an artist in her own right; presenting the ground-breaking work she did through weaving and drawing; pushing these mediums into new forms to redefine attitudes towards design and fine art. The curators’ tour at Tate Modern was a unique and anecdotal insight for students into Anni Albers’ methodology, her creative drive and intelligence as an artist.”

Juan is one of several staff members on Camberwell’s Fine Art courses who will be working all year with students on celebratory activities built around the 100th anniversary of the Bauhaus, and he is clear about the far-reaching influence that the school has had not just on arts education, but so much of our everyday lives: “The Bauhaus has a multi-fold identity. Bauhaus (translated as ‘construction house’) began as an art school, whose teachings now live not only in the Fine Arts today, but in ideas of design, architecture and what we call ‘modern living’. It’s almost impossible to define how canonical Bauhaus is, but the likelihood is that everything from a smart phone to a lowly self-assembly bookshelf, owes a debt to this influential movement and group of artists.”

Fine Art students at Camberwell will be celebrating 100 years of The Bauhaus throughout this academic year in partnership with the Bauhaus Dessau Foundation, with activity documented on this blog.

Find out more about the work of Josef and Anni Albers, and the Albers Foundation on their website.

Find out more about the Bauhaus100 celebrations taking place all over the world next year at  bauhaus100.com

To find out more about studying BA Fine Art Painting at Camberwell, visit the course page.