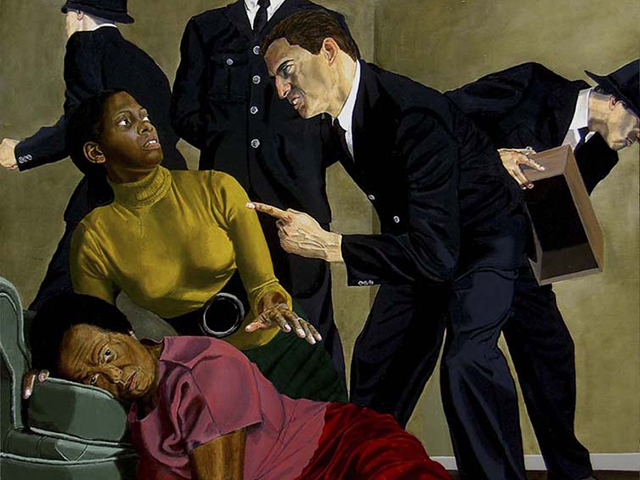 Dr Kimathi Donkor’s doctoral thesis, Africana Unmasked, led him to radically reconsider the way art is interpreted in institutional and educational settings. The research revealed how art has been dominated by perspectives emanating from a very narrow social basis - theorists and practitioners who were overwhelmingly male, middle-class, heterosexual and white. This social bias has correlated with and probably influenced a tendency to overlook or dismiss key concerns about aesthetics, identity and interpretation.

Consequently, his teaching counteracts such biases by foregrounding art and writing by black, female, queer, Native American and Asian artists and thinkers. Of course, this doesn’t mean other contributors are arbitrarily excluded, but instead ensures that dominant perspectives and interests are re-contextualised and de-centred by critical thinkers and practitioners from social groups the western art world has hitherto tended to marginalise.

His own art practice connects with these educational interests because it is based on re-imagining mythic and legendary encounters across Africa and its global Diasporas, principally in painting, but also through drawing, video, assemblage, collage, digital design, performance and installation. Some of my paintings address historic figures of affirmation like Toussaint L'Ouverture and Harriet Tubman, whilst other works contemplate contemporary themes such as urban civil unrest or the pursuit of leisure, beauty and knowledge.

Donkor’s practice-led doctorate was completed at Chelsea College of Arts where he is a Post-doctoral Research Fellow with the TrAIN Research Centre. He has an MA in Fine Art from Camberwell and a BA in Fine Art from Goldsmiths, where he also obtained his PGCE in art teaching.

His most recent solo exhibition was at Gallery MOMO in Johannesburg, and in 2017 his work featured in Untitled: Art on the Conditions of Our Time at the New Art Exchange Gallery in Nottingham, and at the Diaspora Pavilion during the 57th Venice Biennale.