Details and Spaces: A Collaborative Project

Taking place in early May this year, Details and Spaces was a collaborative project between 70 first year BA Interior and Spatial Design students at Chelsea College of Arts and their tutors who collectively designed and built a temporary installation spatially linking Tate Britain and Chelsea College of Arts.  The project was supported by not-for-profit initiative Kupambana and sponsored by John Purcell Paper.

Students studied and surveyed the architectural details of both Tate Britain and Chelsea College of Arts, focusing on their respective historic ornamental language, in search of discovering imagined spaces hidden within. The students then documented these details in drawings and models. A number of details were chosen and enlarged, using wire, wood and paper to form two structures large enough to inhabit inside. The final structures were situated on the Rootstein Hopkins Parade Ground, on a sight line, visually linking both institutions. 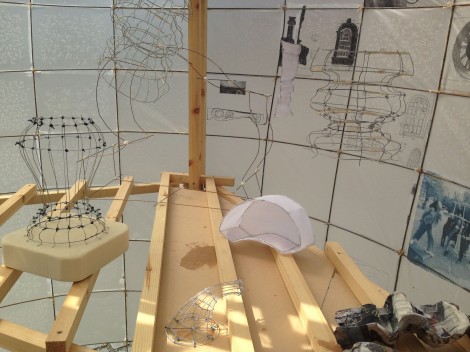 “Zen understands a specificity of thing-event to be a recapitulation of the whole; parts and the whole are to be lived in an inseparable relationship through an exercise of non-discriminatory wisdom, without prioritizing the visible over the invisible, the explicit over the implicit, and vice versa.”(Nagatomo, Shigenori, Japanese Zen Buddhist Philosophy, The Stanford Encyclopedia of Philosophy (Winter 2010 Edition) 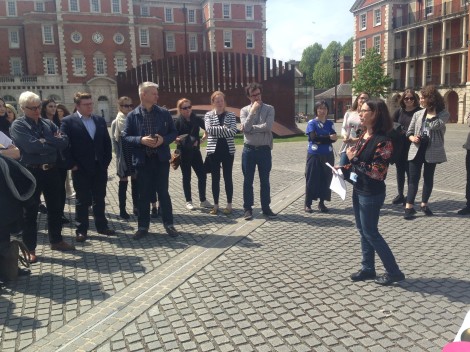 Students and Staff on the Rootstein Hopkins Parade Ground

To create light weight structures with complex forms, students studied the building techniques and skills of traditional craftsmen of the Japanese paper festival float Nebuta in Aomori. The Nebuta float has a squared timber skeleton, to which wire, bent to form a complex shapes, is attached and on which shoji paper is glued.

Find out more about BA Interior & Spatial Design at Chelsea College of Arts.