Featured in this exhibition are Nicholson’s large scale photographic prints, sculptural objects and an experimental video piece exploring the transition from analogue to digital technologies and reflecting on the ongoing erosion of materiality in the digital age. In 2013, Nicholson visited Japan to continue work on his long-term project ‘Last One Out Please Turn On The Light’ – a photographic series that documents the world’s surviving professional darkrooms. He wanted to capture the workspaces of the master printers before they were made redundant. Nicholson also documented his journey from one darkroom to the other, scrutinising the materiality of Tokyo streets, the asphalt, gutters and pavements.

We spoke with the curators Paul Davey and Hayato Fujioka, and artist Richard Nicholson to find out a little bit more about the project and the challenges of curation in an unconventional space. 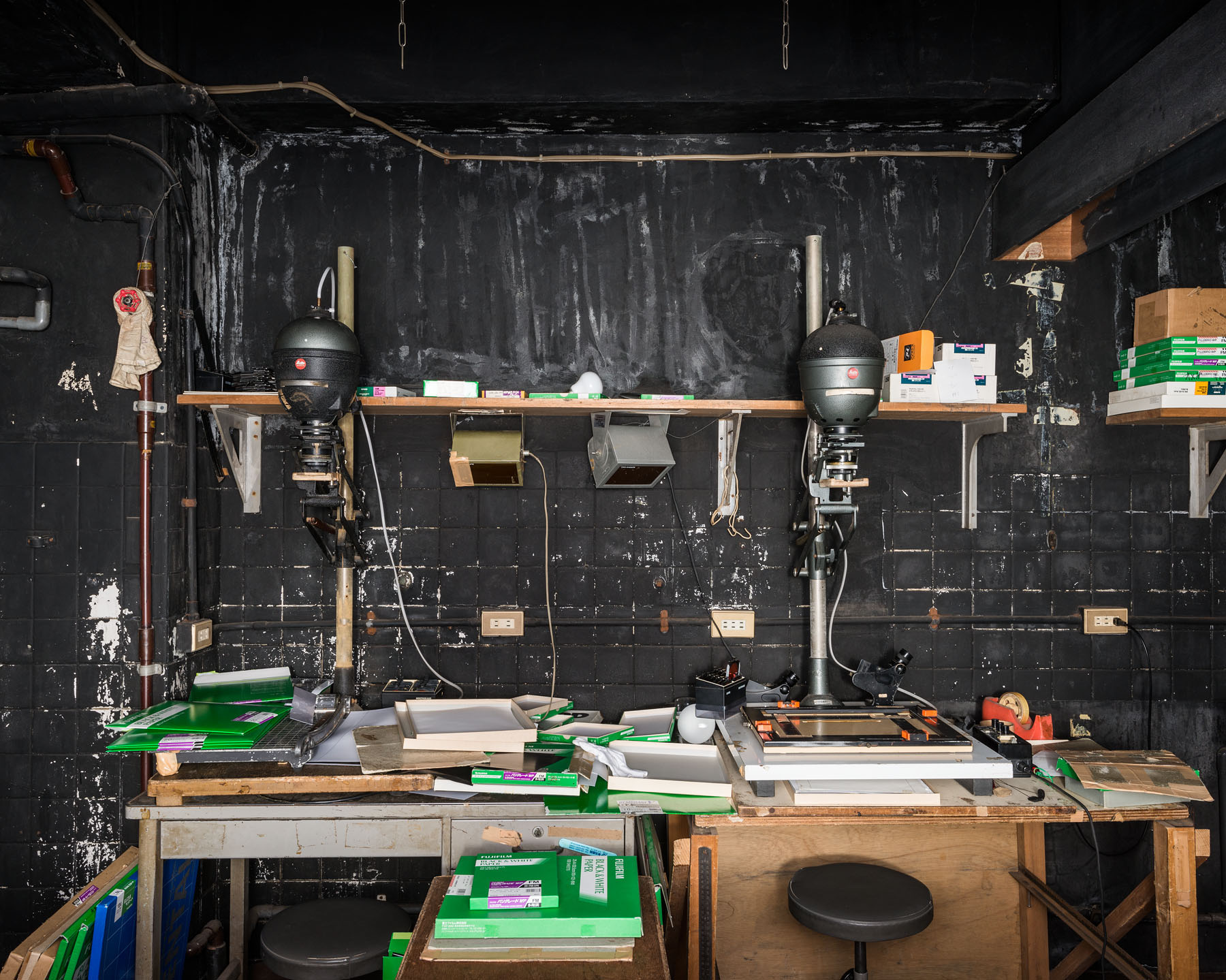 Paul, you are currently studying on the Chelsea MA Curating & Collections course, and Hayato, you recently graduate from the MA Culture, Criticism and Curation course – how did this collaboration come about? Do you have any advice for curators collaborating together?

HF: All the exhibiting artworks of Tokyo Analogies were shot in Tokyo in March 2013 by Richard Nicholson. I co-ordinated this project soon after my BA at CSM. When I came back to London for my MA last year, I wanted to exhibit the works in the Morgue so I had to collaborate with someone from Chelsea. Luckily I met Paul Davey through my friend Thomas Ba, who runs the UAL’s Curation Society. Paul knew about Richard’s work and kindly agreed to collaborate with me.

PD: I hadn’t really heard of the Curation Society prior to this collaboration, although one of my peers had been quite engaged with it. Knowing my personal interest in photography, they kindly connected me with Thomas.  I guess collaborating with someone who shares the same interests as you is quite vital.

HF: Paul and I bonded well at an early stage. I believe that collaboration needs trust, openness, good communication and discussion. Collaboration is challenging but enables curators to push their boundaries and make their life more interesting. 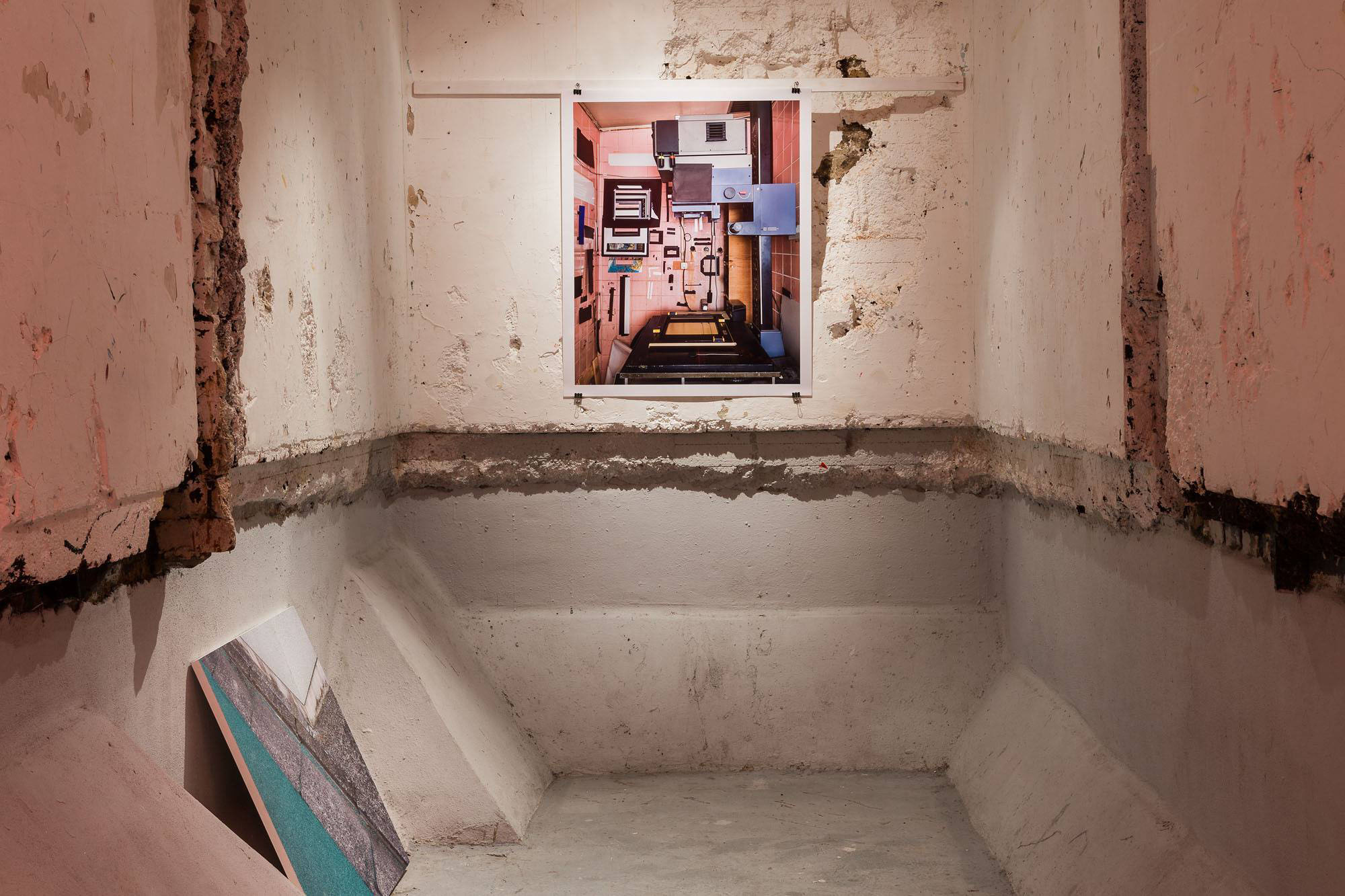 I’m quite interested in the contrast between the images of the workspaces and the images of the street surfaces. Can you explain a little bit about how these two sets of images work together? What was the decision behind exhibiting them side by side?

HF: One of the curatorial challenges was how to contextualise Richard’s darkroom photos. We did not want to fetishize declining darkrooms as an archival exhibition while knowing that many photographers still hold on to analogue photography. So we became interested in communicating his journey in Tokyo by showcasing Tokyo Diagonal, the photographs of Tokyo surfaces that Richard made as he walked from one darkroom to the next, but also Tokyo Limousine Bus, a video clip that he shot from the airport limousine bus with his iPhone. We then identified lots of similarities between these images in terms of shape, perspective, texture, but also that they commonly explore the erosion of materiality in our contemporary digital experience. 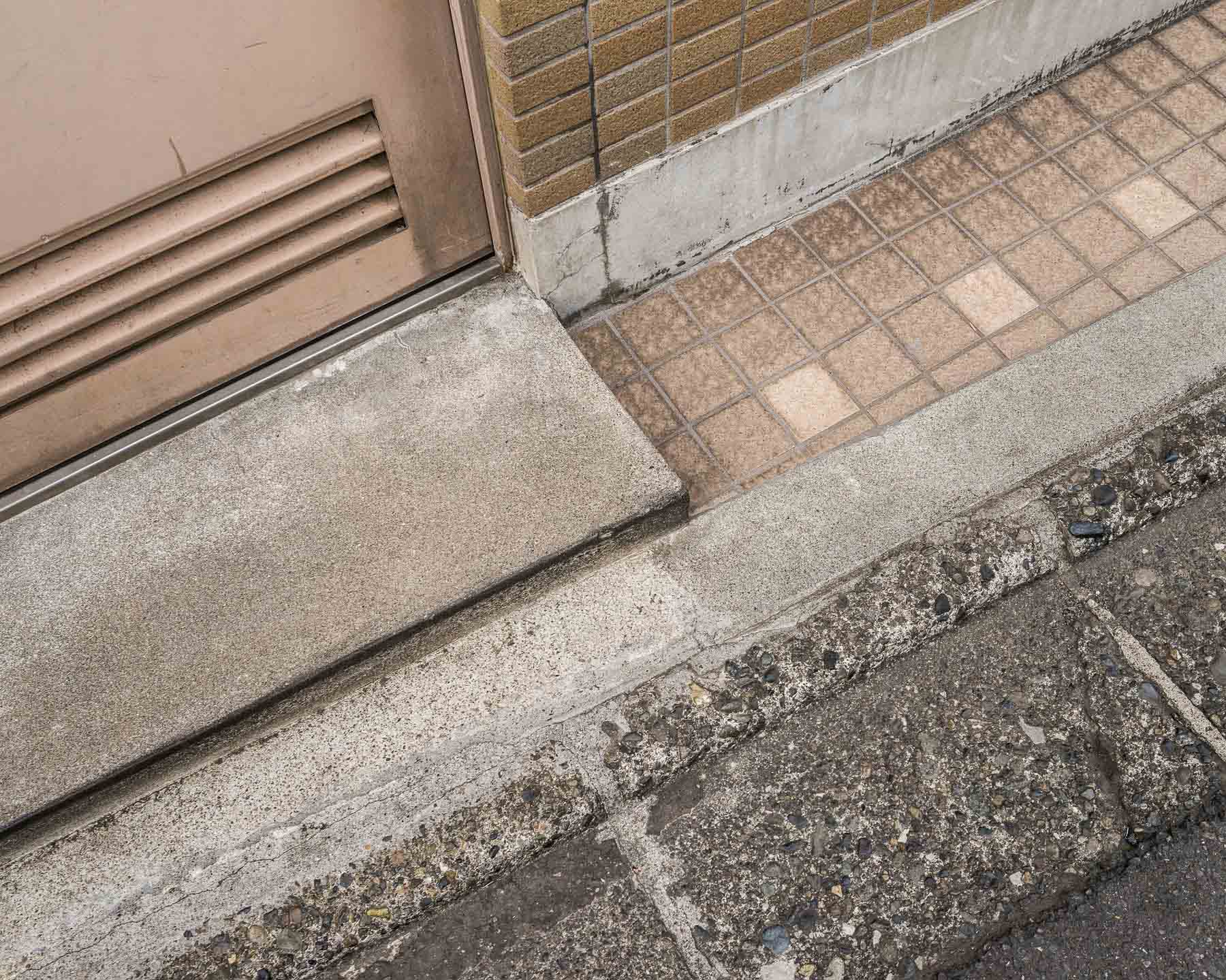 There’s a noted absence of humans in both the workspace images and the street images giving the spaces a ghost like quality. Do you feel it is important to archive such spaces once they have become defunct?

Richard Nicholson: Empty darkrooms, empty streets. It’s all about loss. The darkroom work will survive as an archive because it is now quite comprehensive, featuring professional darkrooms from many different cities (London, New York, Paris, Berlin and Tokyo). But the creation of an archive was not my primary motivation. My first photograph of an enlarger was motivated by the conceptual conceit of an enlarger printing its own image (an analogue selfie). This developed into an interest in the enlarger as a sculptural object, with its immediate environment being a kind of theatrical space. This was right at the time when photographic labs were under existential threat from digital, and so the story quickly became more humanistic – I became engaged with the plight of the darkroom worker. As a body of work, these images of darkrooms can operate on different levels. When I showed it at Photo London 2016 it meant one thing, at Chelsea it means something else. 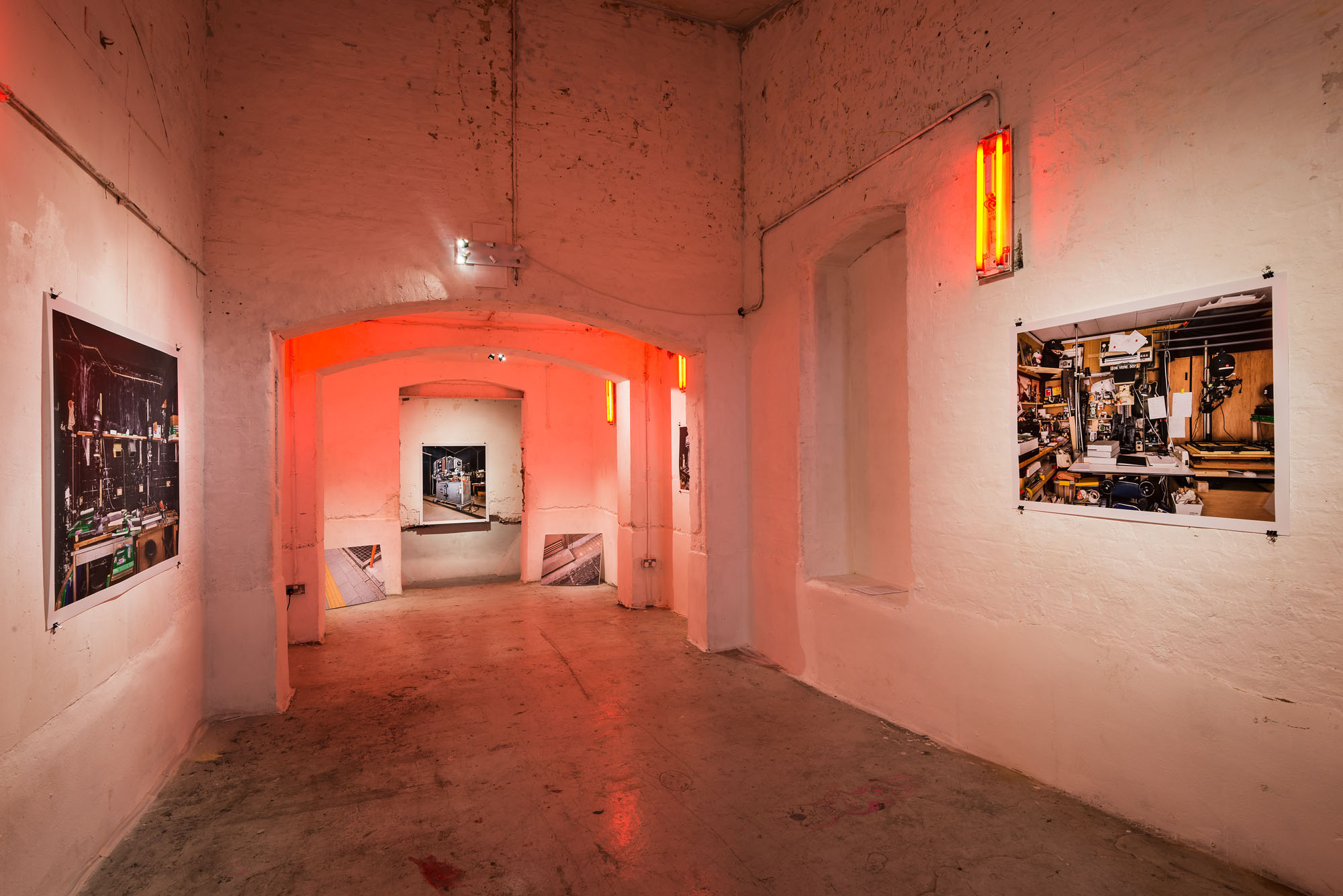 The Chelsea Morgue is a very site-specific place to exhibit, and very far from a traditional white cube. Why did you choose the space?

HF: The idea of death is also evident at the Morgue in which human corpses used be stored when Millbank was still the Royal Army Medical College. I was interested in the analogy between the Morgue and darkrooms – there is no natural light in the space. Also, the texture and the materiality perceived in the Morgue resonate with those in the darkrooms. The Morgue’s architecture lend itself to the artworks and to the overarching concept.

Were they any specific challenges in using the Morgue space or curating the exhibition?

PD: As Hayato was saying, the space lends itself to the work, which adds a new layer to the exhibition. Of course there were a few technical challenges along the way, for example the ceiling crumbling away the moment you touch it. However it was important that we embrace the unique characteristics of the Morgue and to utilise its’ aesthetics as a part of the installation. 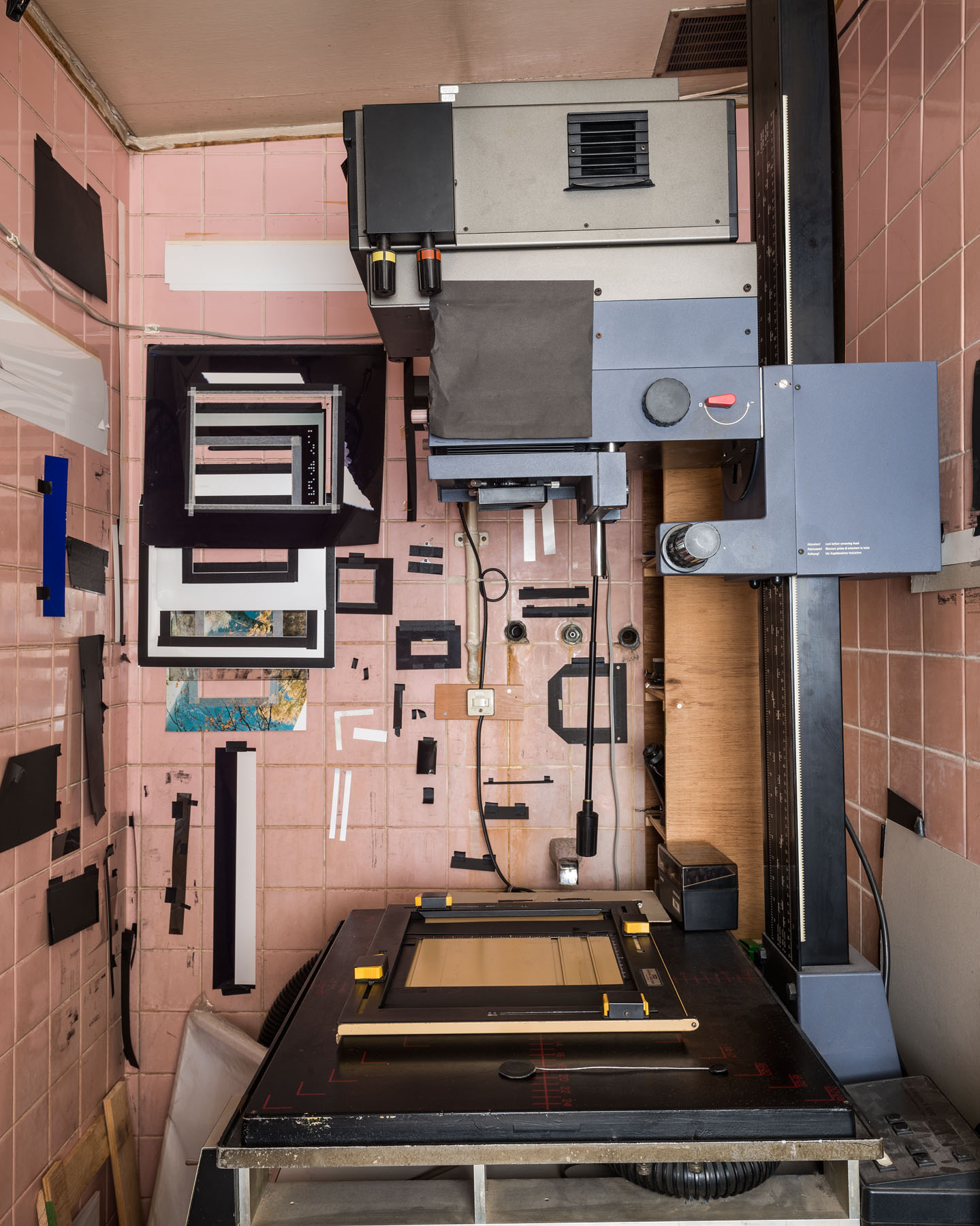 Finally, is there anything specific you would like a viewer to take away from this exhibition?

PD: For me personally, Richard’s darkroom series have a hold on me. They begin to explore the transition from analogue to digital technologies, these have been presented alongside Tokyo Limousine Bus (2013) a video shot entirely from Richard’s iPhone – I hope that this will get the viewers questioning the themes in ‘Last One Out’ series.

HF: Ironically, Richard managed to bring forth the presence of materiality by means of digital technology – c-type, inkjet on white MDF and video clip for example. For me, this ambivalence is interesting to think about. 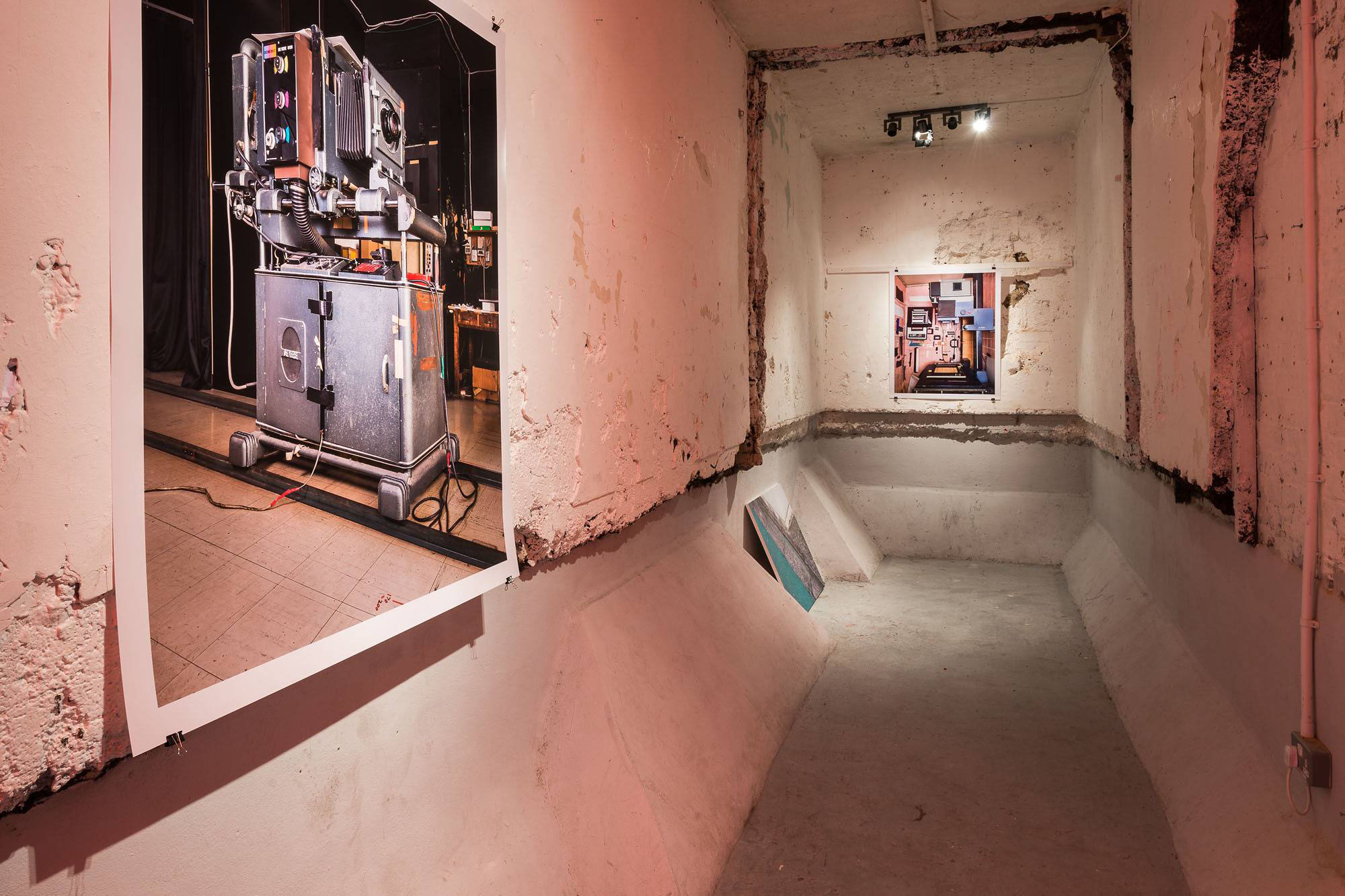 Find out more about the Chelsea MA Curating & Collections course.