A recent collaborative project between 75 first year students and tutors, reconstructed collectively the 17th century Japanese tea garden in Kyoto, Japan, Urasenke Konnich-an (今日庵) on our Rootstein Hopkins parade ground of Chelsea College of Arts, ‘transforming’ the original garden design with the ‘Mitate’ concept. The entire garden complex was represented using a 1:1 measured ‘drawing’ of part of the garden, with a series of 1:1 wooden constructions – the bench, toilet, gate and tea house of Konnich-an. 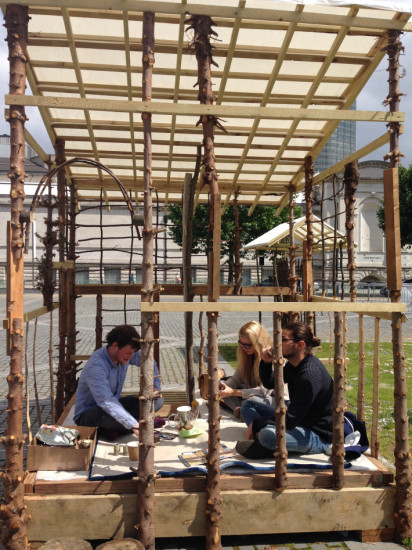 They used the notion of ‘Primitive Hut’ described in Essay on Architecture (1755) by Marc-Antoine Laugier, by employing recycled natural materials for the construction. The starting point for the construction was around 100 discarded Christmas trees collected from the 2013 festive season. The trees were cut, chiselled, and extended to form structural columns for the bench, toilet, gate and teahouse. All the details were developed through a series of workshops, using what is at hand. The resulting garden was a creative collage of collective thoughts, assembled together by the hands of students and tutors.

The project was part of Chelsea Fringe, The Alternative Garden Festival and was also highlighted on the British Council Blog as well as the Dawia Foundation Website

Student and staff would like to give special thanks to Mr Kimura of Urasenke UK for his kind support.

Learn more about BA Interior & Spatial Design from the course page and their blog.