Chelsea BA Graphic Design Communication graduate Irina Wang has been awarded up to £10,000 by UAL’s Student Enterprise and Employability (SEE) department as part of their Mead Scholarship and Fellowship scheme which aims to support UAL students and recent graduates in the pursuit of excellence through the development of their creative practice.

Open to those in their final year of study, students are invited to apply for Mead Fellowships awarded to those who have demonstrated outstanding ideas in their practice so far. Of 115 applicants, Irina was one of just three awarded a Fellowship for her final year project working with Harvard Education PhD candidate Maung Nyeu, designing educational materials for children in the Chittagong Hill Tracts to learn their native language, Marma, and the award will allow her to extend this work beyond her degree.

We asked Irina about her work and how see is excited about the new ways design skills can be applied in the real world. Congratulations on winning a Mead Fellowship, can you please tell us how you feel about it?
Thanks! It’s a privilege to have the project recognised and funded, but more importantly, I’m excited that these huge issues surrounding language extinction and education have gained another platform for discussion.

Can you tell us about the project you won for and how the award is going to contribute to this work?
For what started as my self-initiated Final Major Project, I’ve been collaborating with Harvard Education PhD candidate Maung Nyeu and Endangered Alphabets Project founder Tim Brookes to design educational materials for Our Golden Hour, which enables children in the Chittagong Hill Tracts (CHT) to learn their native language. The initiative targets multiple issues, including minority language extinction and cultural marginalisation under Bangladeshi hegemony.”

State education is currently implemented in the national language Bengali and because CHT children are raised speaking completely different indigenous languages, they associate schooling with alienation and punishment; the drop-out rate is 98.5% by the tenth grade.

So far for Maung’s new transitional model of multilingual curriculum, I’ve applied typographic analysis to the Marma alphasyllabary and letterforms. However, making things for the context of CHT schools (as opposed to a Chelsea degree show) means conducting plenty of on-site research and establishing relationships in Bangladesh – that’s where the MEAD grant will be particularly helpful. Hopefully I’ll be designing and producing tools like typefaces and dictionaries to document and revitalise minority languages there and around the rest of the world. 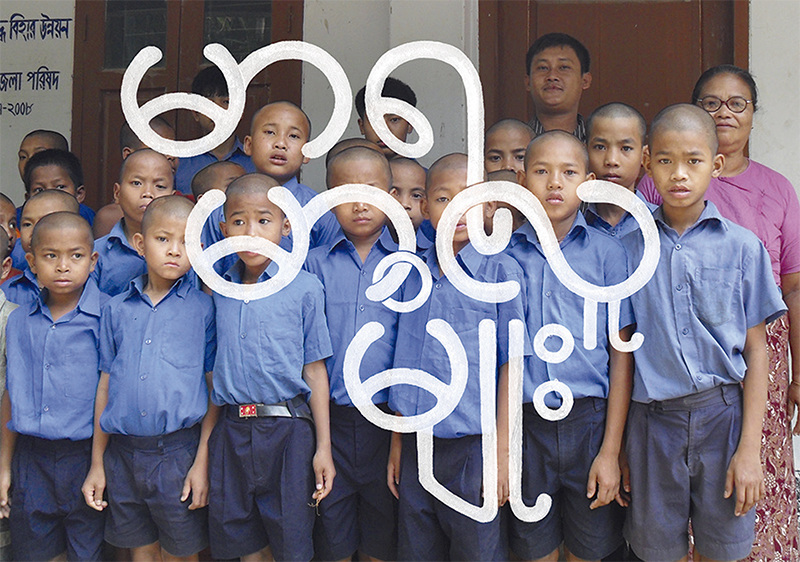 Looking back at your time at college, what is your favourite memory or best thing you have learnt during your degree?
I’ve graduated alongside friends who work with film, publication, photography, typography, illustration, coding, etc; It’s inspiring to see the same set of ‘graphic design’ skills and research methods being applied to such a range of media and outcomes. It’s a good demonstration that graphic design is built on the basis of resolving problems with a variety of visual ammunition, not just reproducing trendy posters and churning out metaphoric logos.

Do you have any advice for students about to start at Chelsea in the autumn?
Take full advantage of the city. I saw London like a tourist for the first month or so, and I’m thankful aspects of that curiosity stuck over the years. Simply living here has exposed me to so many things about the creative community and the world at large that I simply wouldn’t have encountered back in Florida. Contrary to popular opinion, it’s certainly worth the climate swap.

As you are about to graduate, what are your plans for the summer, and beyond?
I’m currently interning at Pentagram, mainly to help out with their design work for London Design Festival 2015. My student visa expires in October, so anything beyond that is (perhaps literally) up in the air. My trip to Bangladesh will likely take place in 2016, and until then I’ll just be soaking up as much as possible.

Each year I’m surprised by new ways design skills can be applied in the real world, and I particularly enjoyed using them recently in conjunction with my geekier linguistic and anthropological interests! Research has always been an indispensable part of the design process, and I hope that social action is increasingly considered equally vital. Designers are already equipped for spurring longterm change in social behaviour, and contributing to something much bigger than personal practice is at once humbling and gratifying.

Find out more about Irina’s project on her website.

Find out more about the other Mead Scholarship and Fellowship winners on the SEE webpage [PDF].

Find out more about studying BA Graphic Design Communication at Chelsea on our course page.