Nilgin Yusuf, Programme Director for the Media & Communications postgraduate cluster has collaborated with long-serving catwalk photographer Niall McInerney to create one of the most exciting fashion books of the year, Fashion’s Front Line. The book is a visual journey through three decades of photographing runway shows in Paris, Milan, London and New York, with commentary from Nilgin, a former Fashion Editor of The Sunday Times and writer for Daily Telegraph.

Bloomsbury Publishing and London College of Fashion have collaborated on the launch to offer a 25% discount, simply enter FASHION in the checkout when ordering Fashion’s Front Line. We also caught up with Nilgin before the launch to talk about the book, catwalk gossip and changes on the runway in the past three decades. 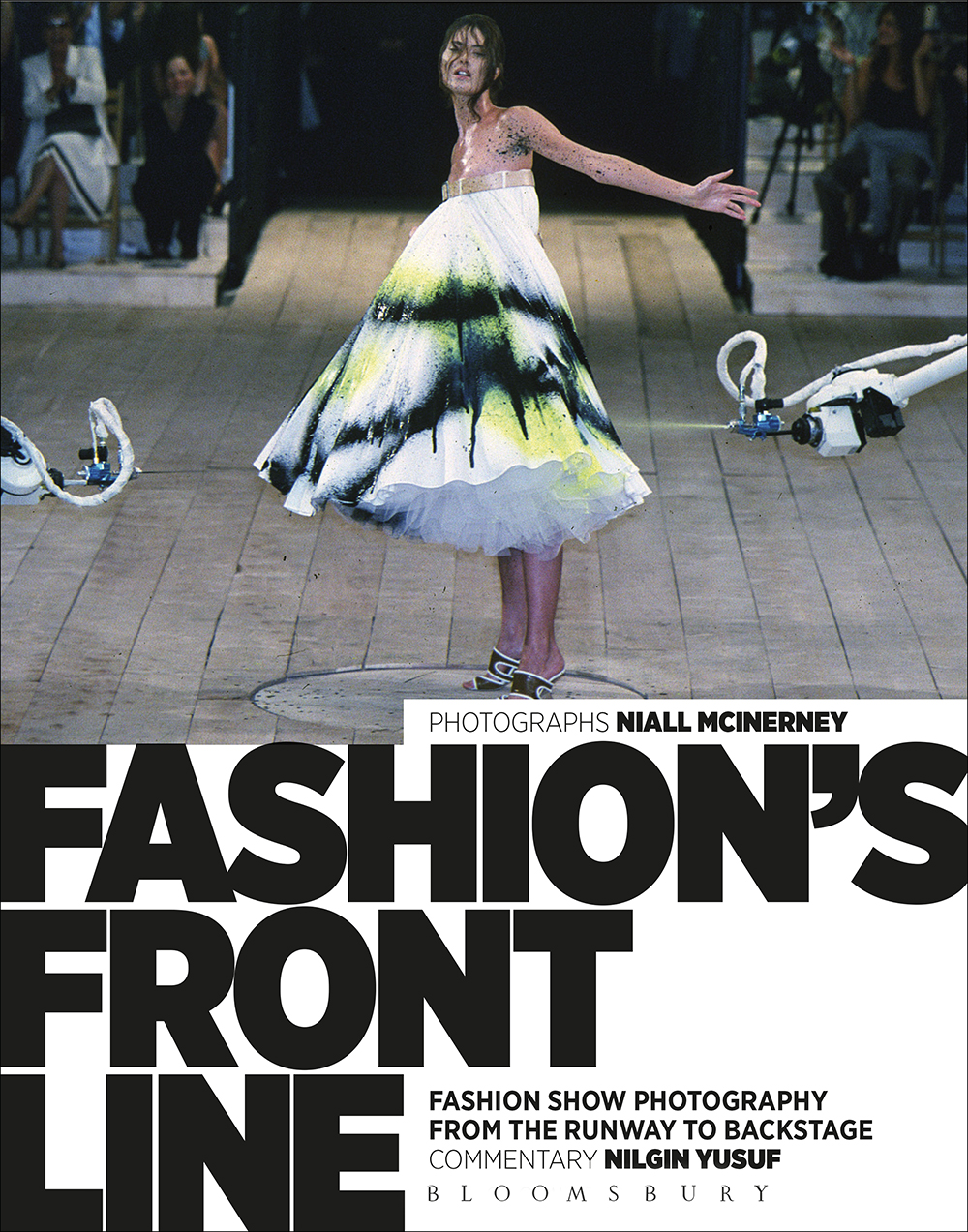 LCF’s Nilgin Yusuf has collaborated with long-serving catwalk photographer Niall McInerney to create one of the most exciting fashion books of the year.

How did the collaboration with Niall McInerney’s catwalk images come about, and what made you two want to create Fashion’s Front Line?

Niall McInerney is a catwalk photographer that most people in the fashion industry will be familiar with as he covered the international designer collections for over three decades. When he was first trying his luck as a catwalk photographer in Paris in the early 1980s, I was gate crashing my first ever shows as a fashion student. We would have both been mesmerised by the same spectacles (Vivienne Westwood, Claude Montana) so it’s interesting that all of these decades later we should find ourselves working together.

Some years ago, Niall decided to sell his entire fashion archive to Bloomsbury Publishing (1 million plus images) who are now in the process of digitising it. His work will form a big part of the Bloomsbury Fashion Archive. When the senior commissioning editor, Anna Wright came to speak with me last summer, she explained that the publishers were hoping to produce a book that would spotlight some of Niall’s best work. Fortunately, Niall did have his favourites and ‘greatest hits’ gathered together which made the job of myself and Clive Crook, the art director, easier than if we had had to source everything from the archive itself.

What was it like putting the book together, what were the most enjoyable and difficult parts of the journey?

Because fashion had been my background (before working at LCF, I had been the Fashion Editor of the Sunday Times, Fashion Writer at the Daily Telegraph and Elle’s first fashion writer) I thought that this would be an enjoyable project to which I could bring my own experience and knowledge. It was also an opportunity to touch base with many former fashion colleagues and those in the industry which was a key part of the research, everything from show producers, PRs, designers, catwalk photographers, leading figues from model agencies and hairdressing. Many of these people would not have been asked for their perspective before: catwalk photographers for instance are really unsung heroes of fashion communication, so this was a chance to present different views, hopefully a greater understanding of what makes this particular world go round.

Because Niall McInerney’s work is so multi-faceted; Fashion’s Front Line covers backstage, street style and front row as well as catwalk, it gives a real flavour of the whole catwalk experience. I worked very closely with Clive Crook, my former Art Director when I was at Elle to select and edit the images. The book is called Fashion’s Front Line and this quote is inspired by the legendary war photographer and photo journalist, Don McCullin who was once commissioned by the Sunday Times to cover the Paris collections. He remarked to Chris Moore, the veteran catwalk photographer, that it was “worse than a war” so the book worked with this metaphor which is reflected in all of the chapter headings. 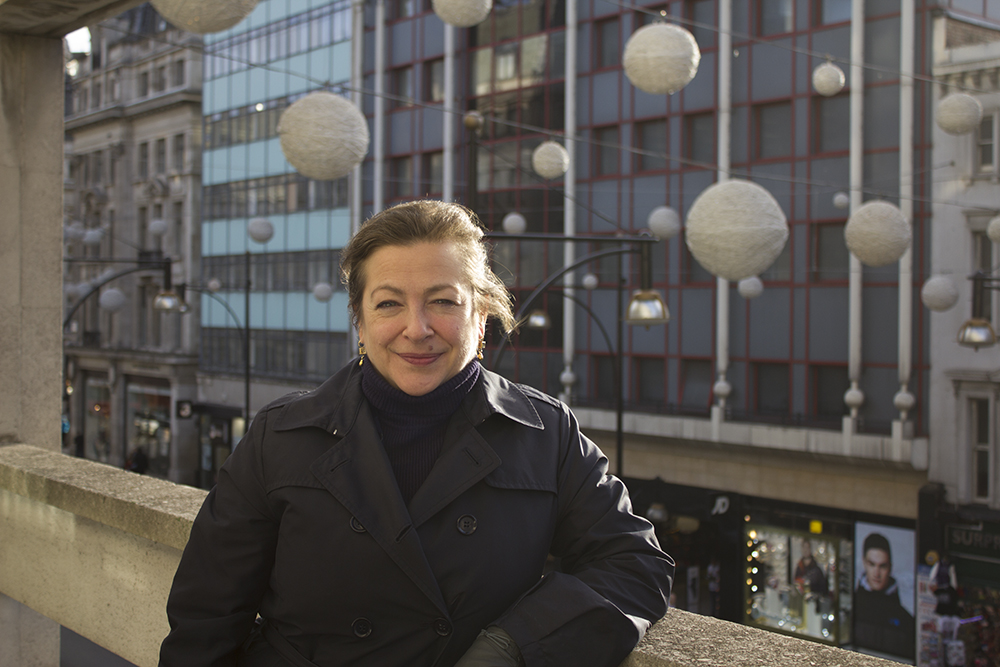 Nilgin Yusuf, Programme Director for the Media and Communications within the Graduate School at London College of Fashion.

What are the highlights of the book?

Through the words, the pictures and interviews, I’ve tried to convey the catwalk concept through the makers and producers of this world. To understand catwalk through the perspective of a catwalk photographer is very different to that of a model booker or a PR or a designer. We are used to seeing catwalk as an image in the newspaper with a headline that will say something like “Spots are in” or “Kate Moss steps out” which is rather reductionist. There are vast numbers of people involved in the crafting of this beautiful illusion. I hope that as well as conveying some of the excitement and thrill of catwalk, Fashion’s Front Line will also be education for insiders as well as outsiders; immersive as well as informative.

What are the biggest changes to the catwalk and fashion in the past three decades?

What I realised when I was researching the book was that this was a time piece; it captured catwalk as it once was, not necessarily as it is now. This was something most of my interviewees said. Now, shows are slicker, shorter, some felt less imaginative, less spontaneous. Everything is much more controlled including where photographers are allowed to stand, which is why fashion photography has become more formulaic and is less spontaneous or atmospheric than when Niall was capturing it. Mikel Rosen, who used to produce the Bodymap shows in the 1980s likened watching contemporary fashion shows to “watching donuts on a production line”.

Niall retired from catwalk in the early to mid nineties when catwalk photography was switching from analogue to digital. The digital revolution has precipitated a huge number of changes in the way that fashion is disemminated, produced and consumed. So while I have written a chapter about this, because it is so important, this chapter is less image rich, because most of the changes had occoured after Niall had exited. However, I hope it will be an inspirational resource for anyone who enjoys fashion.

The book covers catwalk when photographers and journalists had more access, especially backstage, does the book reveal any top secrets or gossip of the catwalk?

Niall was one of the few photographers to capture Naomi Campbell tumbling off her platforms at the Vivienne Westwood Show in 1993. In fact, this shot inspired a whole chapter focusing on the unexpected and unscheduled. I was there too as Fashion Editor for the Sunday Times – she fell right in front of me. Through Jon Walford, who was the producer for this show, Fashion’s Front Line is now able to reveal what Naomi said when she went backstage: THANK GOD I was wearing knickers!