Cordwainers design for the 22nd Century with Business and Media minds

What will designing garments and the consumer look like in a futuristic Mad Max or Blade Runner-world? The Collab-Lab project brought students from Cordwainers, business and media courses together to concept pieces for a future world with a harsher climate and abandoned cities. We explore the results below. 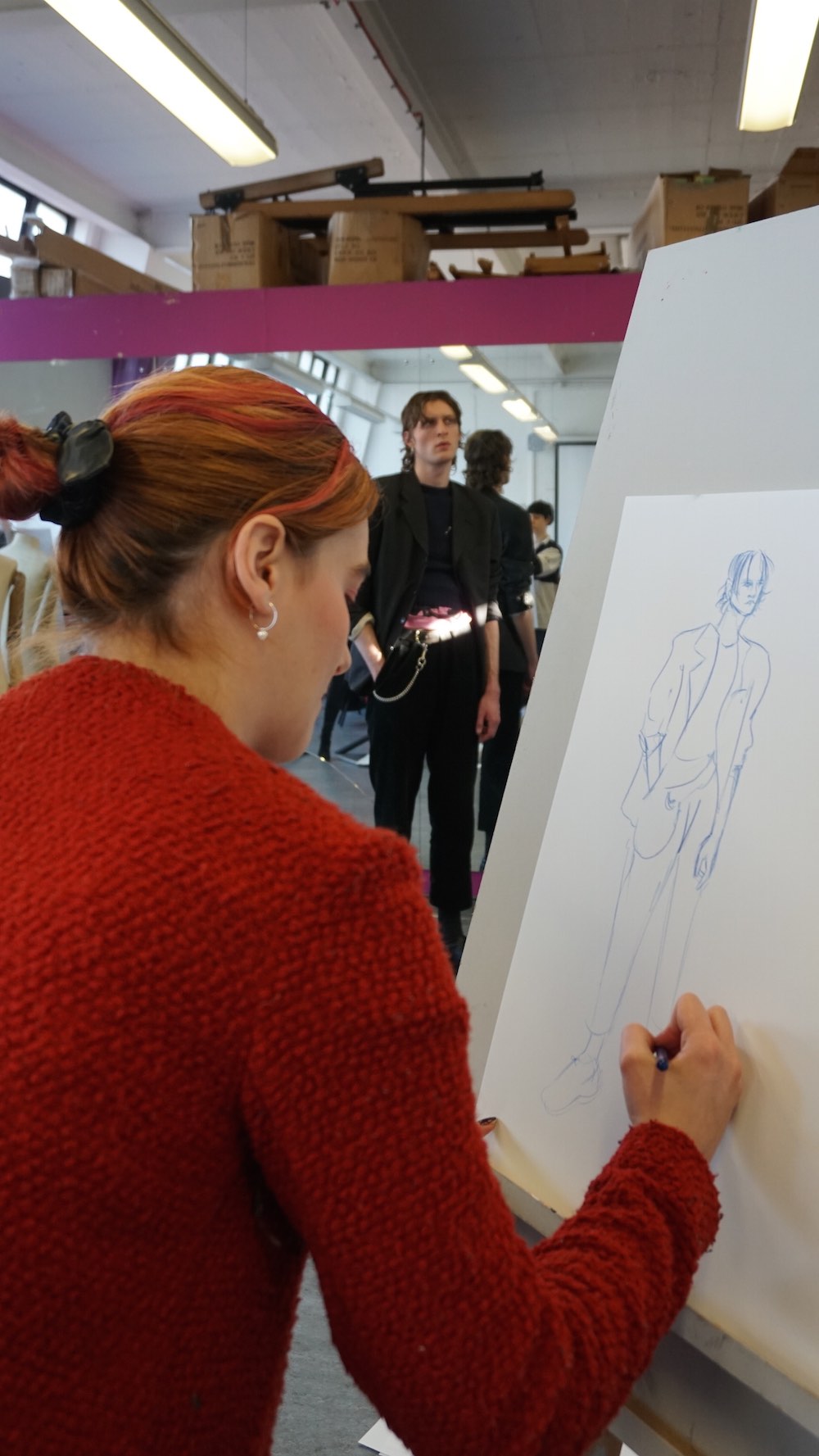 Designing for the 22nd Century with Design, Business and Media students.

BA (Hons) Cordwainers Bags & Accessories and Footwear students worked with a mixture of BA (Hons) Fashion Marketing and BA (Hons) Fashion Illustration and design course students on a brief that asked them to consider a consumer in 100-200 years time, plus the potential consequences of climate change and sustainable production cycles. Organised by Lindsey Riley, Course Leader for BA (Hons) Cordwainers Fashion Bags and Accessories: Product Design and Innovation, the project encouraged a cross-course approach to design and selling, a new perspective for many students. 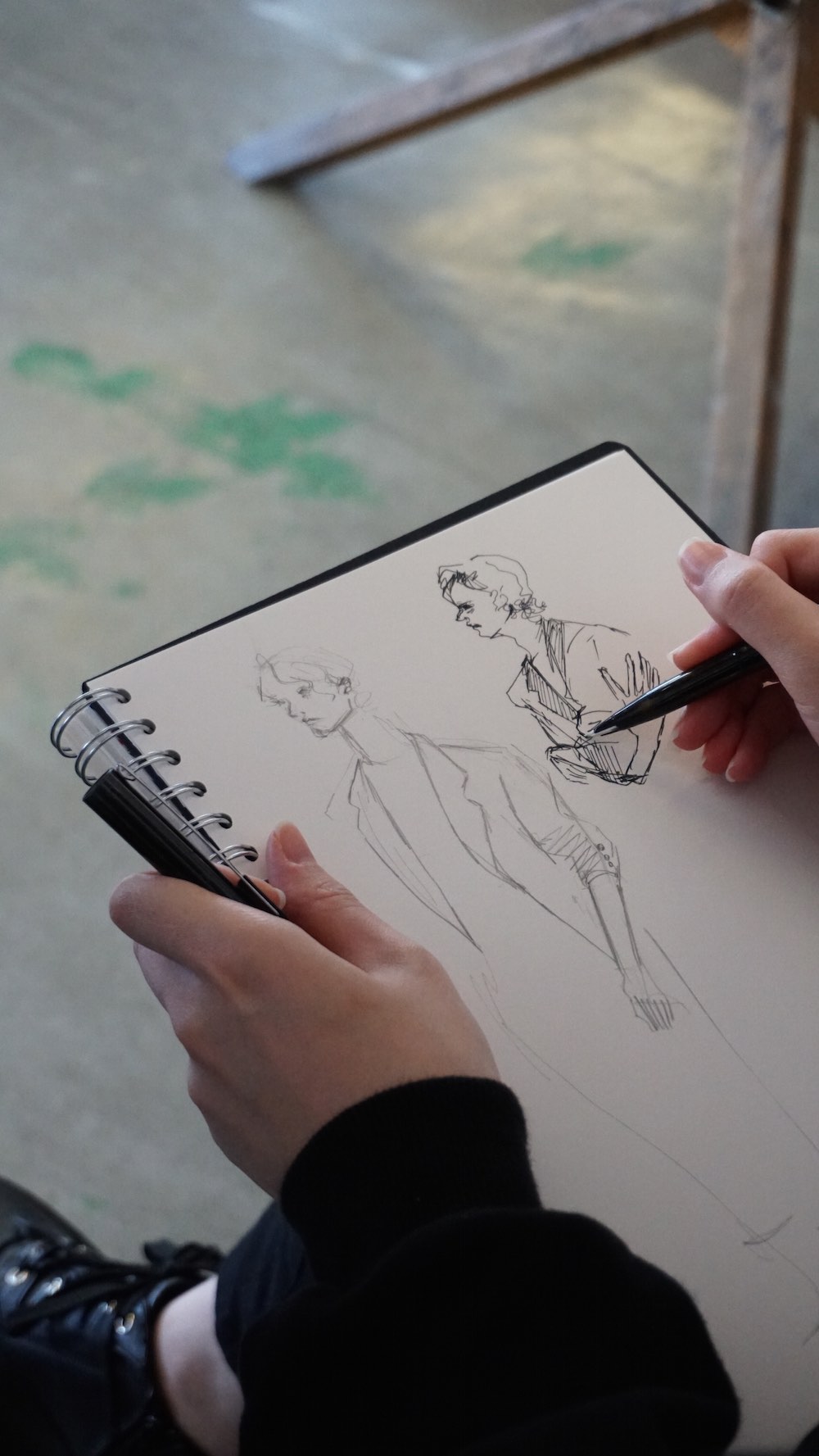 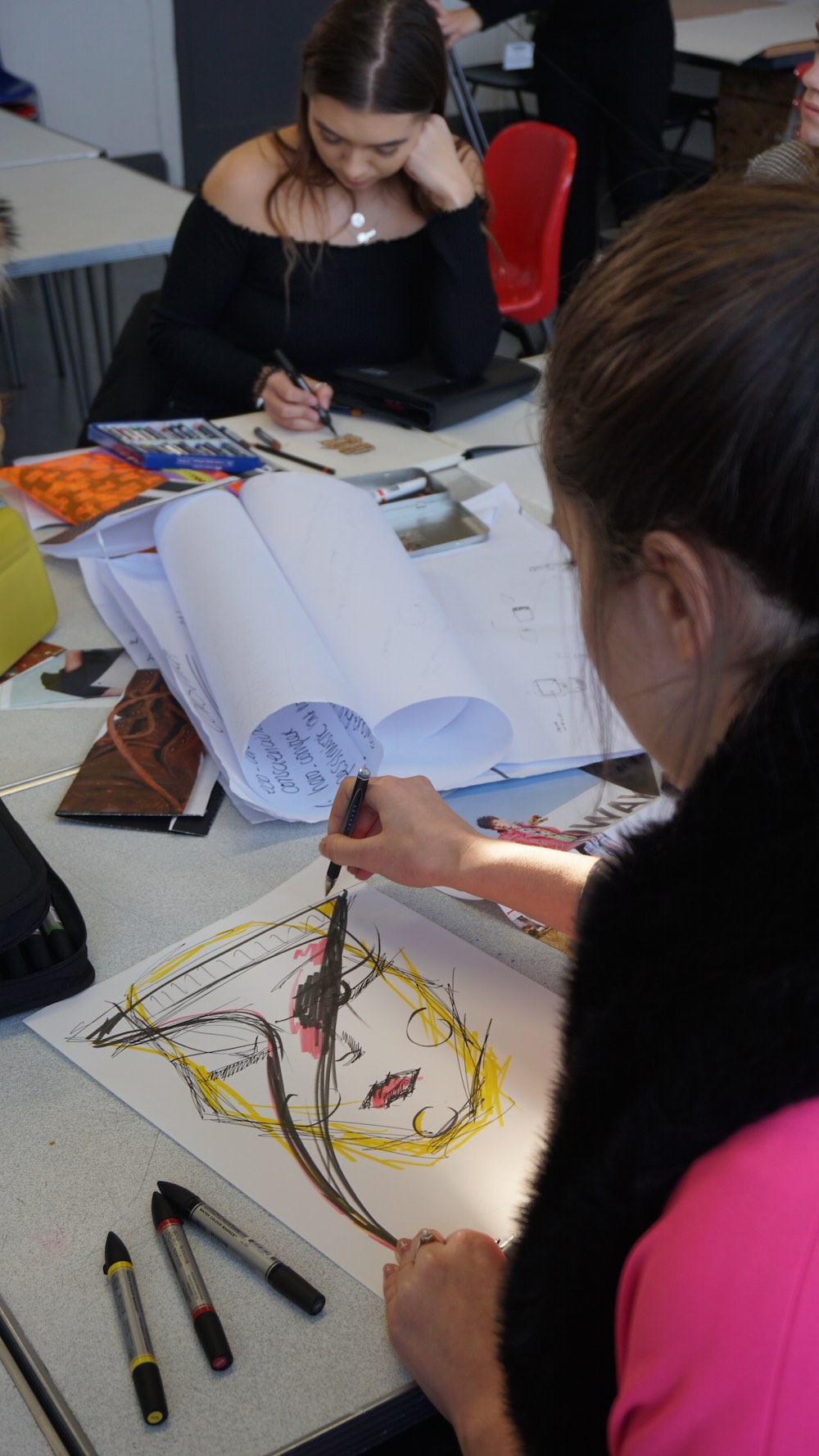 Made up of two interactive workshops, the group were challenged to image a futuristic world based on ‘Hedonist, Sentimentalist and Survivalist’ scenarios. Sustainability was at the heart of the project. The costumer was imagined to have been cryogenically frozen from the present day to the future, with their needs varying for each scenario. We spoke to Samuel Llewellyn, second-year BA (Hons) Cordwainers Footwear student who attended both sessions. Around 30 people attended session one, from Cordwainers and design courses to final-year Fashion Business School students. He told us, “The brief was cool because it meant we could basically design anything as long as we relate it to a future scenario.” Designing for the future is good for the imagination, plus interesting to see what humans might need in 100-200 years, Sam explained.

Tell us what you worked on?

Our client was meant to be sentimental, so we were thinking about how in 100 years time when he/she wakes up, they’d like to have something around them that’s familiar. We designed a garment that had a gas mask attached to it for a survival aspect. We had woven fabric with technology to monitor heart rate, body temperature and other stuff worth considering the potential harsher climate. We thought we would prepare for eventuality. What did you design?

The design was meant to detect if your body was in danger or if your temperature was about to drop. It was also designed to calm you down in an emergency. The garment was designed so it wouldn’t look out of place today. It also has the ability to detect smells and scents that can be frozen into the fabric for when you appear again in 100-200 years time. 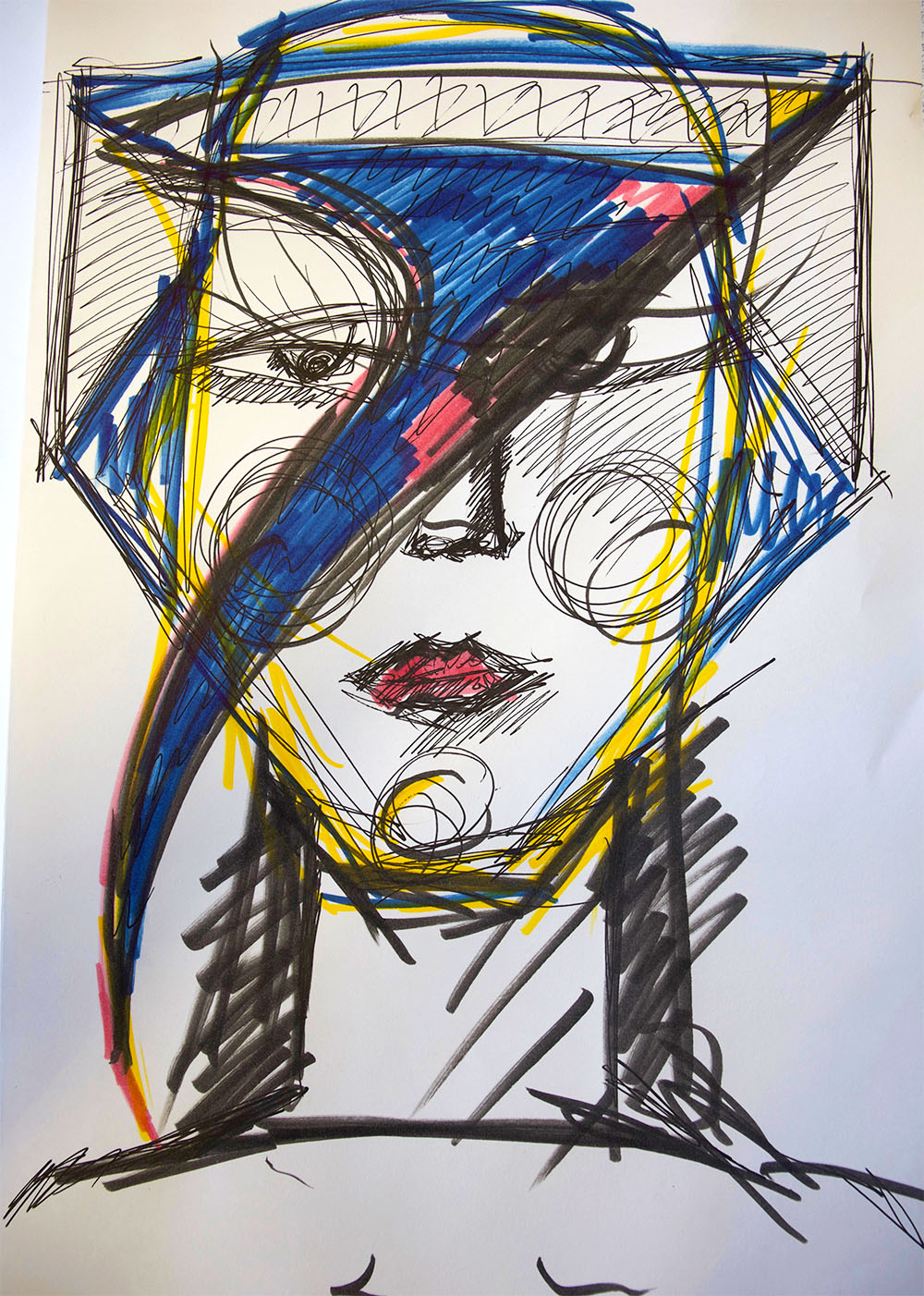 Futuristic helmet from one of the groups at Collab-Lab.

Has this changed the way you look at designing?

This has helped me look at garments differently. I now look at design in a more round-way with the consumer and their needs in mind, instead of just the way it will look. It’s important to incorporate the potential needs and why they would want something like this.

Its been really good to meet other people and see how different minds think about the same brief and project goals. I’m based at Golden Lane doing footwear, so when I’m designing I only take reference from what is around me and other design courses, plus other people doing the same course. So it’s been nice having a wider range of people around me and seeing how they react to the same brief. They had some really interesting ideas as they were coming at it from a different perspective to me. We also spoke to Fashion Bags & Accessories student Xyra Fernandez, who worked on the survivalist scenario. She told us, “Sustainability was what this project was about. Right now you have the choice if you want to be a sustainable brand, in the future that will be different, you are going to have to be sustainable to survive.”

Did you enjoy the project?

This was the first time I’ve worked with Business School students, it has been super useful as I only tend to think about the product and they look at ways to sell it. They were very descriptive with words and what it needs to be, which was good for me designing and thinking about the consumer. 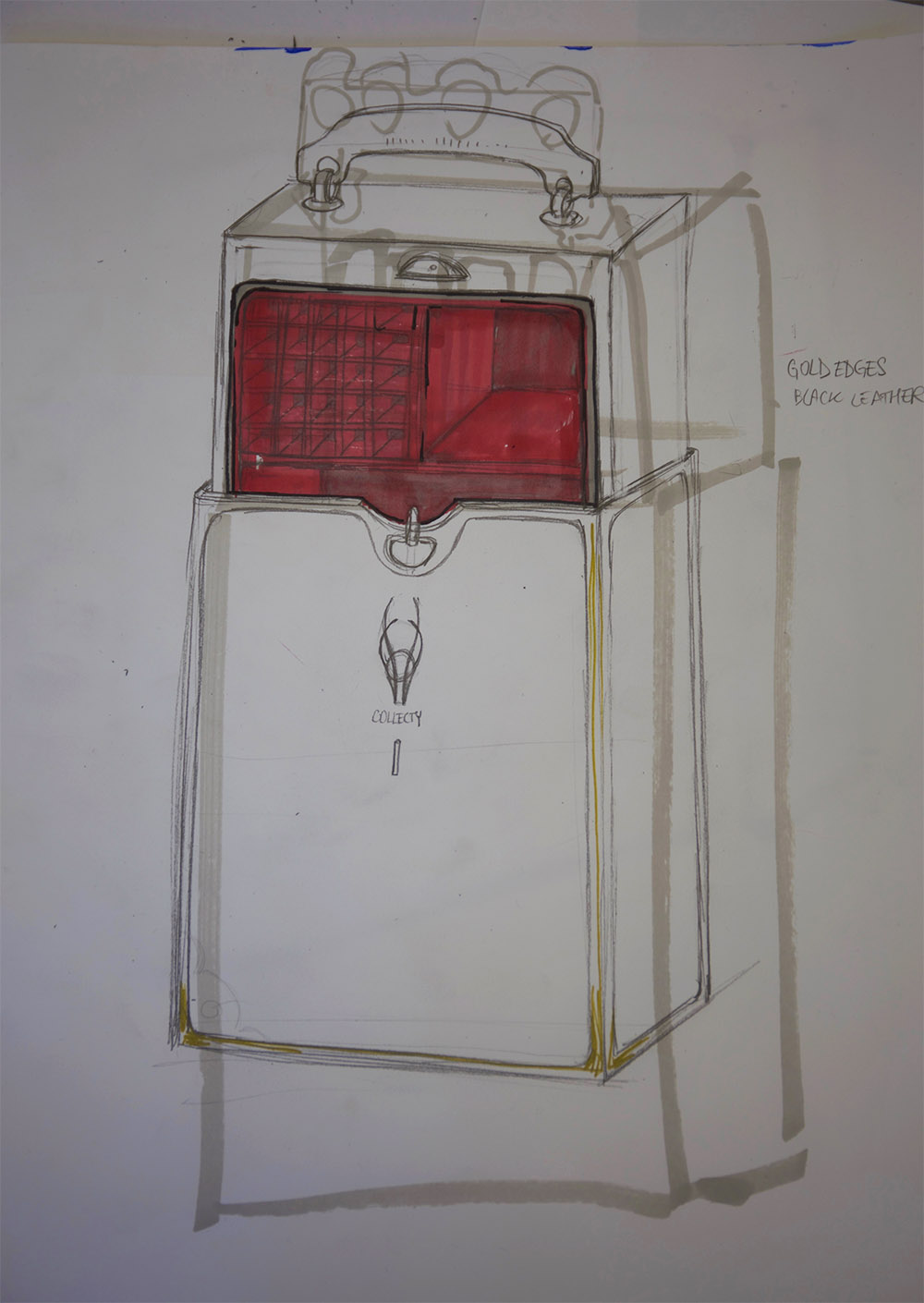 What did you make?

I designed a backpack and another girl designed a full-body suit, which could also be attached to the suit. We created something for a survivalist, so we had to bear in the mind what the earth might look like in 100 years. We imagined it would be very dry with little to no plants, a place that’s hard to find water, a place with derelict buildings and abandoned cities. It was a bit like Blade Runner and Mad Max.

In our backpack, we had a compartment for seeds so you could help plant food. It was very insightful to see how they would try to sell something I wanted to design. It’s been good looking at the business side of what I do, looking at the consumer and needs. We then worked with illustration students to build on our ideas and improve our drawing techniques with them.