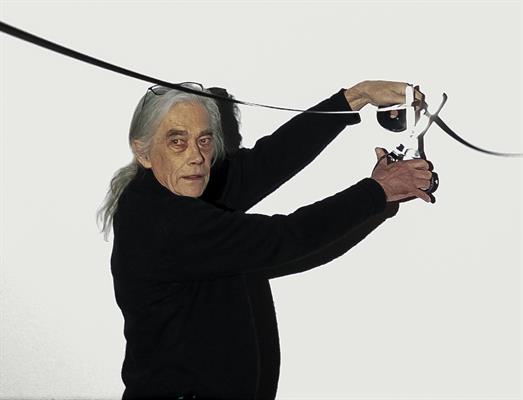 William Raban is an artist filmmaker who has exhibited worldwide in both art and film contexts. Initially known for his landscape and expanded cinema films of the 1970s, Raban's landscape interests, were framed in the 80s towards a more historical and socio-political context: the history of London and the Thames. Reminiscent of Humphrey Jennings' wartime films, Raban's films from the 90s onwards look at the island of Britain and its people, in the context of the global economy and the effects of urban change.

Time and the Wave (2013) addresses the English obsession with nostalgic displays of pageantry, contrasted with political activism against the corrosive power of late capitalism. It has been screened in cinemas and shown as a continuous installation at the Mercosul Biennale, Brazil 2013.

The 3-screen site-specific installation Duchamp’s Dissent was commissioned for the Tate Tanks opening programme (2012) and continues an investigation into how concepts of cubo-futurism can be transliterated into a contemporary digital installation.

Commissioned by the Museum of London, The Houseless Shadow (2011) is a night-time ethnography exposing the plight of the homeless in central London that formed the end piece to the Dickens and London exhibition at the Museum of London December 2011 - June 2012.

Raban sees the film screen as both the window for external projection as well as a mirror through which the process of film construction is reflected and the space where spectators can become aware of their engagement.

Raban’s career in the early 1970s developed through the London Filmmakers’ Co-op with structural filmmaking and expanded cinema. The opening programme of the Tanks at Tate Modern (2012) recognized the significance of Raban’s contribution to expanded cinema by commissioning a Filmaktion event (16 October – 21 October 2012) in which Raban was a key contributor showing early multi-screen films and the Tate commissioned site-specific installation Duchamp’s Dissent.

All his films adopt an experimental method in terms of their formal construction that is combined with a rigorous factual approach to the subject material.

For the last 30 years, Raban’s research has been largely concerned with making films in the visual essay and poetic documentary form. London and the River Thames have been two consistent themes in his work since the feature length Thames Film (1986) and Under the Tower trilogy (1992-6) MM (2002) About Now MMX (2010) and Time and the Wave (2013). Raban’s films seek a dialogical rapprochement with the audience where passive consumption is resisted in favour of encouraging the audience to become active participants in the construction of meaning.