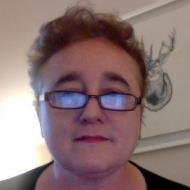 Dr Sheena Calvert is a philosopher, writer, designer and artist. She has a PhD in philosophy of language and aesthetics (2013). Her PhD work in the philosophy of language consolidated this engagement, and considered the implications of a ‘Sensual Logic’; one which acknowledges the significance of paradox (something ‘a-logical’, operating at the limits of thought).

As a typographer and book designer by background, she has always been immersed in questions about the materiality of language, and its implications for how we form knowledge.

Her current primary research investigates the moment where material language and philosophy interact, including the possibility of enacting an immanent; ‘performative’ form of philosophy at the level of the material text/book/artefact.

In her teaching, at both BA and MA levels, she is interested in how addressing certain ‘primary’ questions informs the development of creative work in its broadest forms, such that (for example), asking ‘what is colour?’, or ‘How has Modernism failed’? initiates a deeper investigation of a subject, and invites cross-disciplinary thinking. ‘Humanism’, and deep critical thinking is at the core of her teaching practice. She teaches theory and practice, at Central Saint Martins (CSM-UAL), Camberwell College of Arts (CCA-UAL), and the Royal College of Art (Visual Communication).

My studio, the .918 press (E3), includes a fully equipped letterpress workshop for the production of experimental work concerning ‘materialanguage’ (with a single ‘l’). Here, I am currently working on a printed work/artists’ book, which investigates various philosophers’ responses to punctuation as a driver of thought. This work was presented at the ‘Face Forward’ Conference in Dublin in December 2015.

Written work includes: Materia Prima, Materia Secunda (Intellect: 2013) and The Moral Economies of Language in Digital Space, for the Leonardo Electronic Almanac (MIT: 2013). I was the co-designer, creative director and contributing author for the journal Zetesis (2013: Vol 1 series). My creative work has been most recently exhibited as part of Jiggling Atoms, The Rag Factory (2012), The Ethnographic Museum in Krakow (2013), and Gallery West, The University of Westminster (2014).

The process-led artists’ bookwork: ‘The Cruelty of the Classical Canon’ (2013/14), was produced specifically for the exhibition: 'The Book: Materiality and Making’ (2014). This work is one part of a larger body of research, entitled materialanguage, which touches upon contemporary concerns about retaining the sensual, human attributes of language and in turn ‘the book’ in an age of digital transformations and dematerialized, screen-based outputs. I am the lead academic on the AHRC’s ‘Way We Live Now’ debate, entitled ‘Books and the Human’ (CSM, December 2015). This debate examined the ongoing relevance of the book, for human culture, knowledge, and experience.