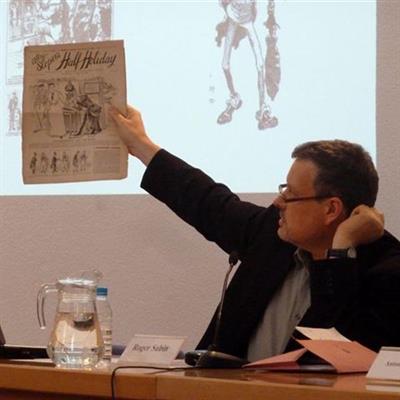 Roger Sabin’s research has an emphasis on the history of comics and cartooning, but takes in film, TV, and other popular forms – including subcultural studies. He is the author or editor of seven books, including 'Adult Comics' (Routledge 'Major Works'), 'Comics, Comix and Graphic Novels' (Phaidon), 'The Lasting of the Mohicans' (University Press of Mississippi), 'Punk Rock: So What?' (Routledge), and 'Cop Shows: A Critical History of Police Drama on Television' (McFarland). He was part of the team that put together the 2016 Marie Duval Archive (www.marieduval.org). He serves on the boards of eight research journals, and is Series Editor for the booklist 'Palgrave Studies in Comics'; and Series Co-Editor for 'Palgrave Studies in Comedy'. His journalism includes work for 'The Guardian', 'BBC' and 'Channel 4', and curatorial consultancy includes 'The British Museum', 'The British Library' and 'Tate Gallery'. The 'Sabin Award' is presented annually at the 'International Graphic Novel and Comics Conference'.

Roger’s work on publications draws from theories around seriality (especially how stories develop in different contexts), and his subcultural research is focused on the 1960s-90s. He is currently investigating the Victorian entertainment business, and how music halls, penny papers, and advertising meshed together to create a template for the multi-platform industry we see today. He has two books in process.

In terms of PhD students, he has 17 completions to date, and welcomes applications on any aspect of pop culture, including practice-based (for example, creating a graphic novel).