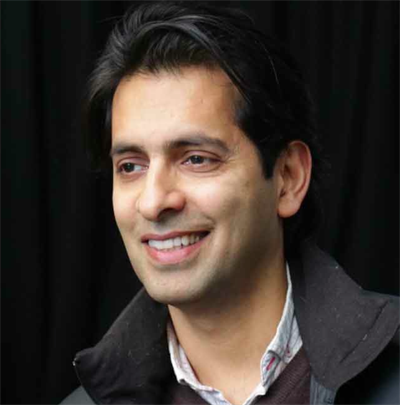 London College of Communication's (LCC) research in Screen, Media and Design including the relationship of Teaching and Knowledge Exchange to Research is central to Pratap’s work at LCC where he leads the Research Department for staff and students. This includes UK and international research partnerships (especially USA and India) that develop LCC’s unique research emphasis and its focus on the role of the imagination in social justice and inclusion.

Pratap has extensive experience as Course Director of MAs, including writing and leading MA Documentary Film. He is an award-winning documentary film maker with over 30 credits on films for Channel 4, BBC TV, the British Council and fine art spaces including Modern Art Oxford.

He presents and writes widely on documentary practice and ethics; dialogue in contested spaces; documentary as a key to inter-cultural, decolonial and post-colonial futures; Stanley Kubrick; listening and mediation in communication. He is a member of UAL's research centre in Transnational Art, Identity and Nation (TrAIN) and the Photography & the Archive Research Centre (PARC)

He is an innovator, committed to developing inclusive curricula, and works across Teaching, Knowledge Exchange and Research to promote cross-cultural interchange through teaching, research and documentary film practice. As an educator, Pratap works with students as both collaborator and mentor and in doing so helps students to connect study, research and professional practice.

For his individual excellence Pratap Rughani was awarded a prestigious National Teaching Fellowship (NTF) in 2013, by the Higher Education Academy, the professional organisation for higher education teachers. He served as Deputy Chair of the NTF's committee 2015-18. In 2019 he was elected Chair of the Editorial board of Media Practice & Education, MPE, a leading academic journal for practice-based research. He joined the AHRC’s Peer Review College in 2020 and served on Research Excellence Framework 2021 (REF) Panel 34, with responsibility for assessing outputs, impact and environment. In 2021 he was appointed a Principal Fellow of the Higher Education Academy. He is a Trustee of the environmental charity Pragya and served as a trustee of the anti-discrimination charity the Karuna Trust 2015-22. In 2021 he joined the Representative Board of ELIA (European Arts School League).

He writes "My practice embraces documentary film and photographic practices from journalism to artists' film. Much of my early work is in observational broadcast documentary modes, with twenty-five films for BBC 2 and Channel 4. More recent films explore the greater aesthetic freedoms of independent commissions for the British Council, or research-supported projects designed for exhibition in gallery spaces such as Modern Art Oxford. Many films explore the dynamics of inter-cultural communication, conceiving documentary as a crucible in which people of radically different perspectives, cultures and politics come into relation, for example with the Truth & Reconciliation Commission of the new South Africa. I am interested in examining and evolving inter-cultural documentary film, cultivating the kinds of pluralised spaces through which difficult dialogues and newer understandings can evolve.

The unique power of the 'documentary charge' and its relationship to 'reality' is a key research area. I am interested in how the ethics of production decisions are made visible and interrogated, including the relationship of ethics and aesthetics, for example in creating and analysing images in the aftermath of atrocity of trauma (see research outputs). How subjectivity positions documentary truth claims and the significance of 'visible evidence' is a time of fake information is key to my documentary practice. Philosophically I am interested in how exposure of the conditions of production and subjectivities of documentary teams shapes the 'observed' event - configuring realities in these moments of 'touch'."

Essential in any post-colonial context is the recovery of voices at the margins and understanding their centrality. My research interests are preoccupied by the construction of realities that documentary film uniquely signals.