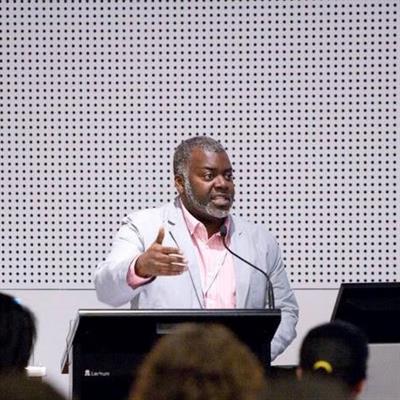 Paul Goodwin is a curator, researcher and educator based in London. Goodwin’s research focuses on Black British Art and African diaspora art since 1980 and transnationalism in contemporary art production. In his interdisciplinary research project Revisioning Black Urbanism at Goldsmiths, University of London, from 2006 to 2010 he explored topics relating to urbanism and the generative potential of 'Blackness' in cities such as London, Lisbon and Paris.

His multidisciplinary research and curatorial practice revolves around exploring the creative potential of both cities and exhibitions as sites of aesthetic, socio-cultural and political intervention. Within the urban field this has been framed around understanding how the black and migrant presence in cities have shaped and in turn been shaped by formations of urban aesthetic and socio-cultural modernity. Within the field of contemporary art Goodwin has focused on the dynamics of how processes of migration, globalisation and transnationalism are yielding new forms of innovative artistic and curatorial practices in both a European and broader international context.

In 2014 he participated in the major EU funded research project MeLa – European Museums in an Age of Migration - co-curating a summative research exhibition at MACBA Barcelona in July 2014 and co-editing the MeLa book Transfigurations: Curatorial and Artistic Research in an Age of Migrations (Royal College of Art/MeLa Publications, 2014) with Victoria Walsh and Pamela Sepulveda.

He is the Co-Lead Investigator (with Prof Ming Tiampo) of the Trans-Atlantic Platform for the Social Sciences and Humanities funded international research project: Worlding Public Cultures: The Arts and Social Innovation as well as co-founder of the Transnational and Transcultural Arts and Culture Exchange network (TRACE).

Goodwin is Chair and professor of Contemporary Art & Urbanism and Director of TrAIN Research Centre (Transnational Art, Identity & Nation) at University of the Arts London where he also teaches on the MA Fine Art programme at Chelsea College of Arts.