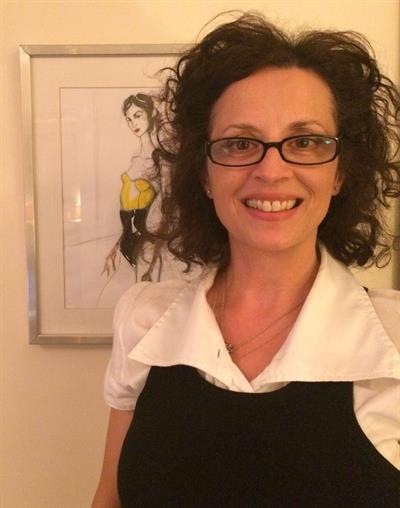 Dr. Michèle Danjoux is a practicing artist and internationally esteemed researcher with a background in Fashion Design. She is also an accomplished Design educator with over twenty years of experience in Higher Education. Her academic posts have included Senior Lecturer at Nottingham Trent University (1993-2009), where she also mentored early career researchers, and Principal Lecturer and Masters Programme Leader at De Montfort University (2009-2013). She is currently Research Coordinator for the School of Media & Communication at London College of Fashion; the LCF Research Hubs and UAL Performing Dress Lab, an International Research Laboratory established with partners at Aalto University, Finland and Royal Melbourne Institute of Technology, Australia (http://performingdresslab.com). Danjoux’s research interests intersect Design and Performance, and centre on the interactive potentials of wearables in real-time immersive contexts. Her contributions to knowledge in her transdisciplinary field, linking fashion/costume design with performance, dance, sound arts, digital/networked media, and interaction design, for affective wearing of audio and visual output, have been both distinctive and pioneering – generating a more critical approach to the role of costume in performance. Her research outputs were returnable in the RAE 2008 and REF 2014.

In 2004, Danjoux co-founded the design and performance laboratory (DAP-Lab [http://people.brunel.ac.uk/dap/]), with choreographer and media artist Johannes Birringer, as creative research catalyst to explore her interests in the convergences between Fashion and the Performing Arts, and her innovative concepts for materialising design in motion. The Lab quickly gained international recognition, was awarded grants (The British Council, Daiwa Foundation [2009-10], and European Research Council Consolidator Grant [METABODY, 2013-17]), and today, receives invitations to numerous international co-operations. In 2005, Danjoux was the first fashion designer in the UK to work in telematic dance and networked performance (virtual and interactive costumes), when DAP-Lab collaborated with designer, Galina Mihaleva in Arizona on The Telematic Dress and Emergent Dress projects (2004-06) with Arizona State University. This innovation was discussed by Professor Andy Lavender in a chapter he wrote on Theatre and Technology in 2008 (DOI: 10.1002/9780470751480.ch47). Furthermore, Danjoux’s research has influenced other artists and designers across a variety of practices, evidenced in publications that refer back to her ground-breaking work. The German Tanz Magazine published a feature on Danjoux’s designs in 2013 (‘Touch me, wear me’, Tanz: Zeitschrift für Ballett, Tanz und Performance, May 2013, pp. 70—71) at a point when the concept of sensortized performance wearables was hardly known on the European continent.

In 2018, Danjoux was awarded a PhD by London College of Fashion for her practice-based thesis entitled ‘Design-in-Motion: Choreosonic Wearables in Performance. Her project examined the impacts of dress – envisioned as wearable performance design – on practices of movement choreography and sound composition in interactive performance frameworks through the use of specially designed audiophonic wearables. It specifically interrogated the predominantly peripheral position of dress to the emergence of movement in contemporary dance – arguing for a greater interlinking of costume and choreography.

Fashion design
Performance and design for theatre and screen