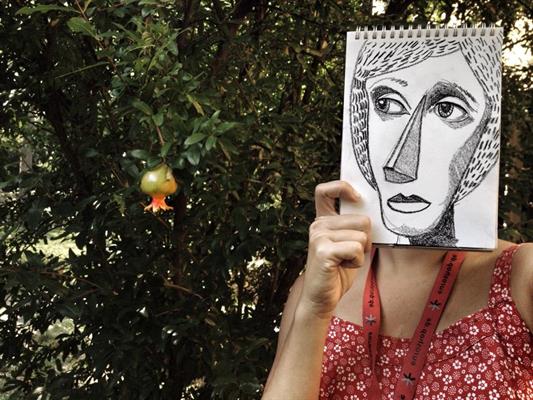 Kim Noce is an international award-winning artist and filmmaker, and she is the Course Leader for MA Animation at London College of Communication.

Her work has been screened in major international film festivals, displayed in art galleries, broadcasted in major TV channels, on streaming platforms and won several prizes around the world including Chicago Int. festival, LIAF, LSFF, IFFEST Document Art , Anima, Sopot and many more.

Kim has directed and animated several independent short films and commissions from funders such as the BBC, Channel 4, Heritage Lottery Funds, Barbican, Arts Council of England, Film London and the British Film Institute and many more. She have also created many immersive installations and multimedia performances, one of which was included at TATE, the Barbican and many more cultural venues.
Alongside her personal research she works for the commercials & broadcast industry. She has been commissioned work as a Director, Animation Director, 2D animator and compositor on series of productions such as BAFTA nominated TV series for the BBC; large scale theatre projections for the Weinstein Co and Warner Bros; several commercials, idents and countless corporate animation pieces

From 2005 to 2017 she co-created the company MEWLAB with Shaun Clark, she has been represented by Film Club Productions at Th1ng for several years and now she is creating a new immersive multimedia collective with Nica Harrison and Anna Spink, KAN COLLECTIVE.

Since 2015 Kim is also currently the course leader of MA animation at London College of Communication at the University of Arts London and an Lecturer for the graduation films at the National Film & Television School, and she delivers master classes around the world. Across her practice Kim has run event merging her multimedia work through participation, performance and education. At The univeriste of Arts London Kim is also supervising PHDs and an active researched with yearly output.

She has also been a festival jury member at London International Animatic festival, IndieAnifest Seoul Korea , Bethere Corfu and at the London British Animation Awards; and many more.

She holds am MA in Directing Animation from the National Film and Television School, BA in Fine Art an traditional painting from BRERA Accademia di Belle Arti in Milan, and a Diploma in Architecture and Scenography from the Orsoline di San Carlo in Milan. Recently she was awarded and completed a series of training workshops at the STORY FUTURES ACADEMY at The National Center for Immersive Storytelling at the National Film and Television School.

YOUR MOTHER ARE MINE
3min short film funded by ACE

DEEP BENEATH THE EARTH
3min short film funded by BFI