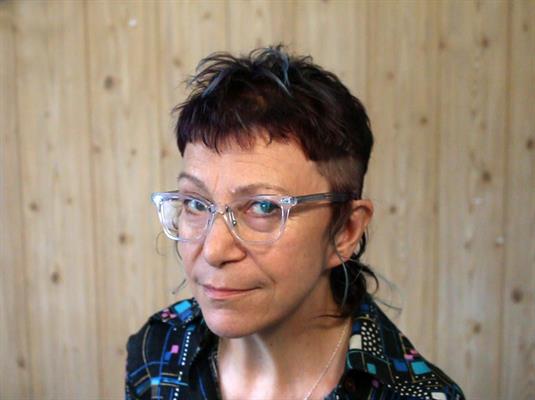 Emerging from the anarchistic, experimental culture of London’s film/live art scene in the 1990’s, she was co-founder of the Exploding Cinema Collective. Her work began as spoken word performance with projections, and developed into a critical stew of filmic and performance languages. Her works have screened widely, including IFF Rotterdam, European Media Arts Festival, New York Underground Film Festival, and museums such as Tate Britain and MOMA New York.

Since 2007 her work has shown as large-scale sculptural installations that physically surround the film, sometimes with continuous live performance inside these installations. Recent solo shows include THE UNSPEAKABLE FREEDOM DEVICE at Grundy Gallery, 2015, SCHOOL OF CHANGE and All Suffering SOON TO END at Matt’s Gallery 2012 and 2010.

In 2015 her fiction book, THE UNSPEAKABLE FREEDOM DEVICE was published by Book Works, a parallel project to the film of the same name. In the fantastic, primitive-future world of the book/film film, the characters become entangled in a cargo-cult of Margaret Thatcher. The project explores the idea of the image of Margaret Thatcher as an after-burn on the collective memory. It became a celebrated controversy when the film installation was almost banned by the county council whose gallery commissioned it.

Jennet Thomas makes films, performances and installations exploring the connections between the lived everyday, fantasy and ideology, experimenting with collective constructions of the meaningful.

She is interested in belief systems, ideas of truth, power and pleasure, and how cultural memories are re-made and distorted according to the needs of each era.

Using a collision of genres, her work can look like T.V. news, experimental film, children's drama, or performance art behaviours, and is frequently comic, uncanny and entertaining.

She creates elaborate works with characters, props and scenarios that are clearly outlandish, yet resonate with multiple layers of meaning. These absurd strategies provoke the viewer into a reflective detachment from the narrative. The discomfiting sense of familiarity with in Thomas’s absurdist worlds, fluctuating between shared everyday experiences, deeply personal memories and sweeping political enunciation, confounds straightforward readings. The found object is an important mechanism in her practice, particularly in the way in which unexpected meanings are generated.

Since the late 1990’s her single screen works have screened widely on the international Film festival circuit, but in the past ten years she has produced a series of large-scale solo Video installation shows for galleries, including All Suffering SOON TO END at Matt’s Gallery in 2012 and SCHOOL OF CHANGE at Matt’s Gallery in 2010.