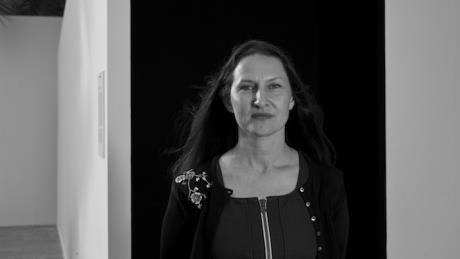 Jananne Al-Ani is an artist, researcher and lecturer working with photography, film and video. She studied Fine Art at the Byam Shaw School of Art and graduated with an MA in Photography from the Royal College of Art.

Al-Ani’s early photographic work focuses on the fetishised veiled body in Orientalist painting and photography. The first multi screen video installations she made, featuring members of her immediate family, explore the power of testimony and the documentary tradition, through intimate recollections of absence and loss in contrast with official accounts of historic events.

Her ongoing project The Aesthetics of Disappearance; A Land Without People, engages with the disappearance of the body in contested landscapes. The work examines the relationship between photography and flight in 20th century warfare and the impact the technologies of surveillance and aerial reconnaissance have had on a range of disciplines including art and archaeology.

The project began with a particular focus on the landscape of the Middle East, its archaeology and visual representation in the history of western art, and has since shifted to take in the desert landscapes of the American south west and parts of the British landscape in which the ghostly remains of decommissioned military and industrial sites remain visible from the air.

Recipient of the Abraaj Capital Art Prize and the East International Award, her work can be found in collections including the Imperial War Museum, London; Centre Pompidou, Paris; Mori Art Museum, Tokyo; Museum of Fine Arts, Boston and Darat al Funun, Amman. She is currently a trustee of The Photographers’ Gallery, London and a board member of Mophradat, Brussels.