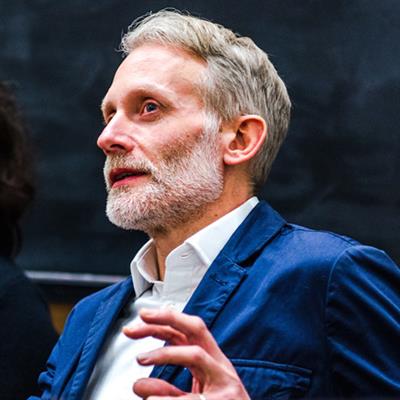 Focusing on the relationship between film and architecture their films explore the fundamental role of light in articulating modernist architectural space. Their abiding formal preoccupations - the camera's ability to produce ambiguities of scale, depth or shallowness, transparency and reflection, and the intersections of architectural planes, vistas, apertures and screens - centre on the altered forms of attention that come from using the camera to magnify and study architectural details and fleeting atmospheric effects.

Their book, Anthony McCall: Notebooks and Conversations was published by Lund Humphries, London, in March 2015.

Graham Ellard co-convenes, with Anne Tallentire, the research project Double agents at CSM. He has spoken at conferences internationally on the subject of the Artists’ Studio, and as part of the ongoing partnership with Acme Studios co-created and directs the CSM Associate Studio Programmes for recent graduates. The book co-edited with Jonathan Harvey; Studios for Artists: Concepts and Concrete. A collaboration between Acme Studios and Central Saint Martins was published in November 2015.

Exhibited works exist at the intersections of architecture and cinema and are preoccupied with the conventions and effects by which space is represented and 'produced' in the projected image. The approach is informed by an understanding of the effects of parallax, transparency and simultaneity, and the construction of voids, vistas, screens and apertures as common to both architecture and it's filmic representation.

Now working exclusively in 16mm film these resolutely analogue works propose a non-documentary, poetic, archaeological and archival probing of specific buildings – typically modernist, often ‘visionary’ – which emphasise the camera’s ability to produce ambiguities of scale, depth or shallowness and counter-intuitive forms of transparency and reflection and explore how a certain kind of European post-war architectural space can be rendered visible by film form without recourse to the conventions of storytelling.