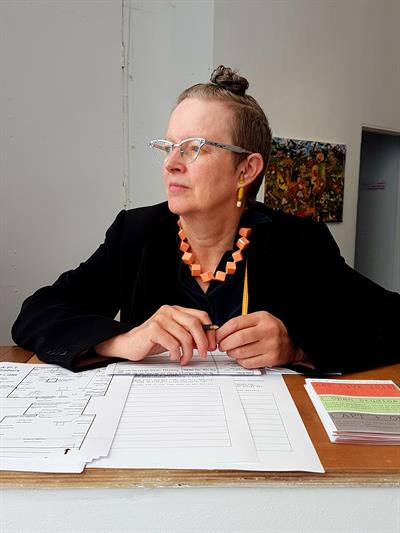 Fran Cottell, an artist based in London, is a Senior Lecturer at Camberwell College of Arts.

She studied Fine Art at the University of Reading and Goldsmiths College. She has a background in painting, public art and feminist, clothing, environmental, domestic and curatorial projects.

Since ‘Display’ 2001, Fran has been producing a series of live installations displaying the contents, visitors and occupants of her house in collaboration with CGPLondon: ‘Still Live‘ 2003/4, ‘Collecting Time: the Living and the Dead’ 2005/6, ‘A Collection of Curators Heads. 2006/7 and ‘Back to Front’ 2011. A touring version was developed for the International Performance Festival PAIR 01 in Lahti, Finland and documentation/evidence exhibited in Concrete Dreams: Art, Architecture and Social Space, co-curated with Liz Harrison for apt gallery/openhouse, London in 2008 and at the Architectural Association (London) for Concrete Geometries Research Cluster in 2011. The house project was transposed to other sites: THE NATIONAL GALLERY OF SOUTH LONDON: Art in the Time of Reagan at the South London Gallery 2006 and an outside architectural intervention were developed for the ‘gold balls’ project for Deptford X 2008.

Performance projects have focused on conversations and correspondence including ‘Hairdressers’ for The Congress for Performance Art in Sacramento’ and ‘5 minutes with 5 years (dogs)’ in 2009 and ‘Cab Drivers’ commissioned by Newlyn Art Gallery/Art Surgery in 2006.


My research addresses the question: how to show the ephemeral, live experiences that make up the quotidian within the fixed frame of the art institution? Further, how to preserve life, or rather the breath of ‘aliveness’?

The House Projects (since 2001) initially focused on the ‘disordered‘, rather than ‘display’ as characterised by Norman Bryson: ‘which disguises the human hand and the ordinary gestures of living.' Later in the spirit of Claire Bishop’s term relational antagonism I built a walkway through the house. Within the still functional spaces, visitors and occupants discussed their relative status, bringing into play: conflicting and contradictory power relations. I engaged in dialogue with museums and galleries about the static nature of collections and their inability to collect life, live art and time and created, through a hole in the ceiling, in a form of reverse collecting, a photographic collection of visiting curators’ heads.

Building on a history of feminist artists, who initially addressing their own invisibility as house workers, the project was extended to include service work.

In the spirit of an active and lively conversation, rather than a social levelling, the work aims to challenge fixed hierarchies, to produce a dynamic democracy with different points of view coming into focus.

In 2011, for the Concrete Geometries Research Cluster at the Architectural Association, an installation was designed and built to facilitate and test the relationship between architectural form and human processes. The focus moved from a relationship between visitors and inhabitants to between moving and static participation, occupations and activities.