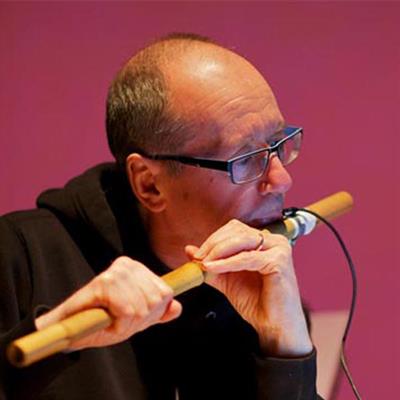 David Toop is a composer/musician, author and curator based in London, working in many fields of sound art and music since the late 1960s. He has recorded Yanomami shamanism in Amazonas, appeared on Top of the Pops with the Flying Lizards and worked with artists ranging from John Zorn, Derek Bailey, Evan Parker, Bob Cobbing and Ivor Cutler to Akio Suzuki, Tania Chen, Camille Norment, Thurston Moore and Ryuichi Sakamoto. Exhibitions he has curated included Sonic Boom at the Hayward Gallery, Playing John Cage at Arnolfini, Bristol, and Blow Up at Flat Time House.

He has published eight books, translated into ten languages, including Ocean of Sound, Sinister Resonance, Into the Maelstrom (shortlisted for the Penderyn Music Book Prize) an autobiography, Flutter Echo, and Inflamed Invisible, a collection of essays on art and sound. Since his first album, released on Brian Eno’s Obscure label in 1975, he has released twelve solo records, including Screen Ceremonies, Black Chamber, Sound Body and Entities Inertias Faint Beings. He is also the co-creator of Sculpture events with artist Rie Nakajima.

What I consider to be research is a questioning of research itself: in what sense can an identifiable practice of listening be formulated and how does that inform the act of reflecting on sound, whether through analytical writing, speaking, composing? This is also true of performance practice, particularly in improvised music: can the reflexivity of improvisation be understood within the framework of research?

My research focus is on sound, listening, writing sound, improvised music (practice, theory and history), sonic arts, strategies for composing for improvisers and a theory of ‘the instrument’ (the device or intangible ‘sculpture’ through which sound-making, listening and related events become manifest). This encompasses specific fields such as collaborative performance and listening to ‘silent’ media such as painting and literature but research as a site of discovery emerges from what is generated from the dialogue between all of these approaches, their varying intensities and forms of articulation.