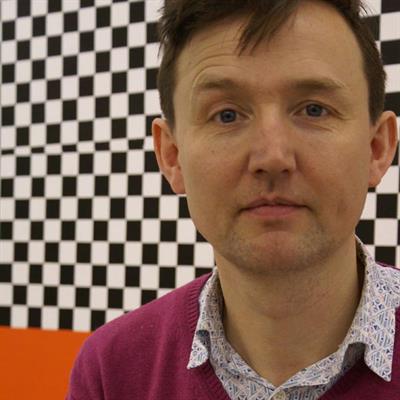 Daniel Sturgis is an artist and curator whose idiosyncratic, painterly language infuses formalism’s rigorous traditions of visual intellect and craftsmanship with contemporary pop references and casual aesthetics. His work proposes new possibilities for the continued relevance and vitality of painting and his off-beat geometric arrangements reinvest the optimistic and visionary qualities of modernism in contemporary compositions. Humorous, media savvy and hierarchically democratic, Sturgis’ works advance the legacy of 20th-century abstraction for 21st-century values and sensibilities.

Sturgis is professor of painting at the University of the Arts London. He was a visiting professor at Nagoya University of Arts, Japan (2012), and Xi' an Academy of Fine Arts, China (2015).

He is represented by Luca Tommasi gallery in Milan and was artist in residence  at the Josef and Anni Albers Foundation, USA (2016) and Chinati Foundation, Marfa Texas (2007). He had his first major solo show at Camden Arts Centre in 1997. Since then, he has shown extensively in Europe and the USA.

He has curated a number of exhibitions looking at aspects of contemporary painting and its historic legacy. These include, 'Bauhaus Utopia in Crisis' Camberwell Space and Bauhaus-Universität Weimar (2020/21), 'The Indiscipline of Painting' Tate St Ives and Warwick Art Centre (2011/12), 'Daniel Buren Voile Toile/Toile Voile' Wordsworth Trust Grasmere (2005) and 'Jeremy Moon - a retrospective' (2001) a UK touring exhibition. He is a founding associate editor of the Journal for Contemporary Painting, a specialist selector and chapter author for Phaidon’s painting anthology Vitamin P3 and he has written for Tate Papers, Burlington Magazine and Texte zur Kunst.

"I am interested in how the culture and language of painting is historically framed and how that history impacts on the contemporary practitioner and indeed the practice and culture of painting. Within my own work, my paintings respect and believe in the tenets of modernist abstraction, but also recognise their fallibility. They neither re-stage the arguments and developments of modernist painting, nor revel in post-modern irony. They can be seen to speak with a divided mind."