Juliette graduated from BA (Hons) Fine Art: Painting at Wimbledon College of Arts in 2007. She was recently awarded the Windsor & Newton Painting Prize.  We caught up with her to find out more about her time at Wimbledon and where she gets her inspiration… I had always wanted to go to art school but was persuaded out of it by my school.  I studied English for two years, before changing to History of Art.  As soon as I did this I realised I wanted to make art work.  I completed my degrees in History of Art whilst simultaneously taking art classes and saving up to return to study Fine Art.

Before I applied to Wimbledon I was working as an insurance broker – but it was a means to an end.  I attended portfolio preparation classes at Central St Martins at weekends and as short courses, whilst working in the City.  As soon as I felt I had enough work, and on advice of the tutors, I put in applications for BA courses.  Wimbledon had an excellent reputation for painting and students had very good spaces to work in.  Having looked around the college I could see that students were able to work independently as well as having excellent technical support.

Having never studied Fine Art I had to get used to working in a communal environment.  I was also 25 when I began the course and I had to get used to being a student again after working for four years.  After the initial culture-shock I had an excellent experience at Wimbledon.  I was taught by Mark Fairnington, whose work I admire and who helped me to contextualise my interests and practice.  I won the Jerwood Drawing Prize in my first year, and it was incredibly useful to have the guidance of tutors both in terms of continuing to develop my work and taking advice on external shows and galleries.  The tutors were also very helpful in assisting with postgraduate applications and in the mock interview process.   One of the highlights was being selected for the Hans Brinker Trophy Prize in Amsterdam – an annual, international prize for art held in a quirky hotel in Amsterdam, which prided itself on being a “budget” hotel and handed out sample packs of dirt and lint from its rooms to guests! I’ve always lived in London and have been fortunate enough to visit the museums and galleries since I was a child.  My favourite is the Victoria and Albert Museum, in particular the Greek and Roman sculpture, the clocks and the reliquaries.  On the opposite end of the scale my work draws inspiration from the neglected byways and liminal spaces within the city.  My winning drawing for the Jerwood Drawing Prize was based on the now-unrecognisable wharves opposite Canary Wharf.  I often make excursions along the Thames and the Wandle, in addition to semi-urban areas of north London where I take photos of disused railway structures and tunnels.  These then form collages in my studio which are the basis of many of my drawings and installations.

I went straight from Wimbledon to the three-year postgraduate course at the Royal Academy Schools.  On graduating from here I found my own studio, and continued to make work in addition to teaching part-time.  I have been in various prizes including the Catlin Prize (2011) and the John Moores Prize (2014), in which I was one of the five shortlisted artists and gained the Visitors Choice Award.  I have exhibited with various galleries and have had solo shows in Korea, Paris and New York.  I am represented in London by the Fine Art Society and also show with Coates and Scarry, who are based in Bristol. 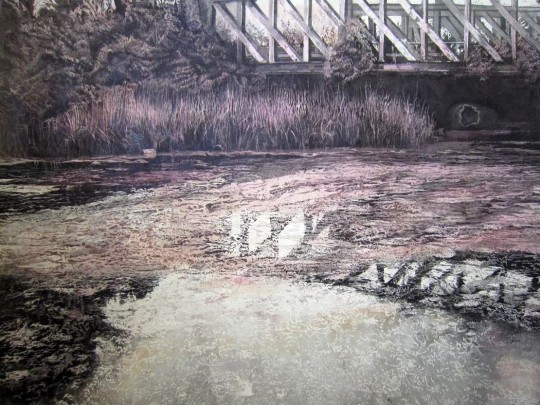 I was recently awarded the Winsor & Newton Painting Prize: I’ve evolved a specific process which references both traditional watercolour and printmaking techniques.  I mainly working a combination of ink and watercolour, and I use large volumes of paint and resist, so the opportunity to enter the Prize, which offered a substantial amount of money for materials, was very appealing.

I’m about to show in the Jerwood Drawing Prize again for the first time in ten years.  I also have a group show coming up in November with the Fine Art Society.  I’ll then be preparing for two solos shows next year: with Le Salon Vert in Geneva and with Moatti Contemporary in London.