Eleni Kyriacou graduated from MA Design For Textile Futures at Central Saint Martins in 2005, where she won the prize for Best Design in Sustainability. After graduating, she worked as a Fashion Designer for Alexander McQueen, launching her own label in 2011. Recently, she was costumier of The Olympic Torch Lighting and Handover Ceremonies at the Rio 2016 Summer Olympics. 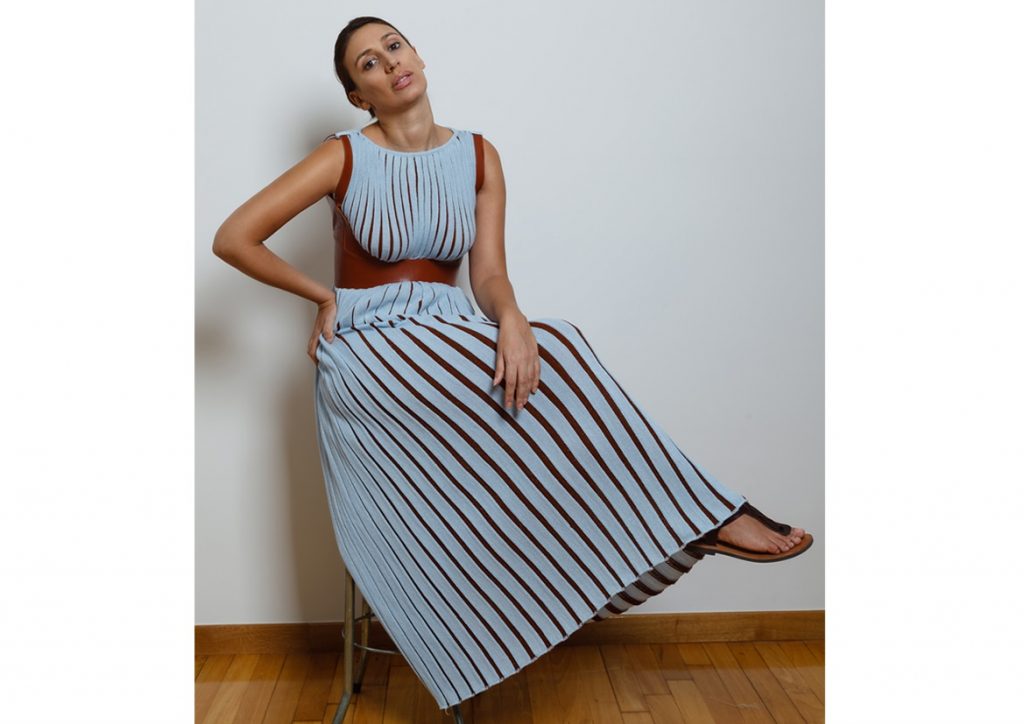 You were very successful during your time at UAL, winning a prize for sustainable design. What was the most important thing you were taught while studying here?

There was certainly an emphasis on designing prolifically, and not being afraid to explore ideas in the design development process. This was a great contrast to my architectural training that taught me to be extremely considered when designing. So the prolific/explorative approach was a useful contrast to have engaged in, and of course has influenced the way I work.

Also, of course, most of what I know about textile design I learnt at CSM, and that is great knowledge and of course knowledge always shapes us as designers.

How do you think your time at UAL has impacted your life and work?

I think it highlighted for me the fact that my architectural training separated me from other textile and fashion designers and by realising how I was different I actually became more confident about the angle from which I approached the subject – which felt like a very different perspective to the other aspiring designers.

So I think overall I gained skills, knowledge and confidence from my time at CSM, that has impacted me greatly. I also have a very good friend who I met on the course at CSM, our friendship which is largely based on our creative common interests has been very encouraging and supportive at times when I have needed it.

You have had a very interesting career since graduating – can you talk us through your journey from graduation to where you are now?

When I graduated I felt quite lost. I knew I loved textiles, but at that time I was actually gearing more towards going into interior design. I worked in a few design practices. However an event that really changed things for me was when I visited an exhibition at The Benaki Museum in Athens called ‘Paper Fashion’ in 2007, and I realised at that moment, that all I had ever wanted to be all my life was a fashion designer.

So I went back to London and did my fist internship at Emilio de la Morena – the second I stepped into his studio I was home. I knew this was what I would be doing for the rest of my life. Then of course I worked for the late Alexander McQueen. I was there for 2 seasons and left only a few months before he sadly passed. That experience influenced me a lot as a designer. The house had a very creative and positive energy which I fed off and it made me very confident. I loved seeing how Lee immersed himself in the creative world of each collection with mood boards – images everywhere. That has impacted me, whenever I design I try to do the same thing – to create a world, the world of the collection, so that I can be as immersed in it as possible and enter the spirit of the collection as best I can.

Not long after my time at McQueen I started to plan how I would commence by own fashion line – it was scary at first. But I remember a friend of mine at the time said ‘Eleni you are terrified because you are jumping off a cliff, but you won’t fall, you will fly’. It might sound cheesy, but it really helped me. With the initial collections I was really figuring myself out. I definitely feel I have improved as the collections have gone on as I have gained more confidence with what I am doing. It’s been five years now since that first collection, I definitely feel I have come a long way. I feel a weird combination of both being proud of everything I have done but also never being 100% happy with it. I think it’s a symptom of many artists, which I just have to live with.

Designing the costumes for The Olympic Torch Lighting Ceremony. I was proud to be part of the Olympics, I had an audience on a scale most designers only ever dream of having, and I really did have such positive and encouraging responses from everyone. I felt proud and happy when I got those responses, which included the Olympic Museum in Lausanne, that requested and now houses two of the costumes from the ceremony.

I am proud of the great press I have had too – from Bloomberg, to CCTV and so on. I have been very lucky in that respect. 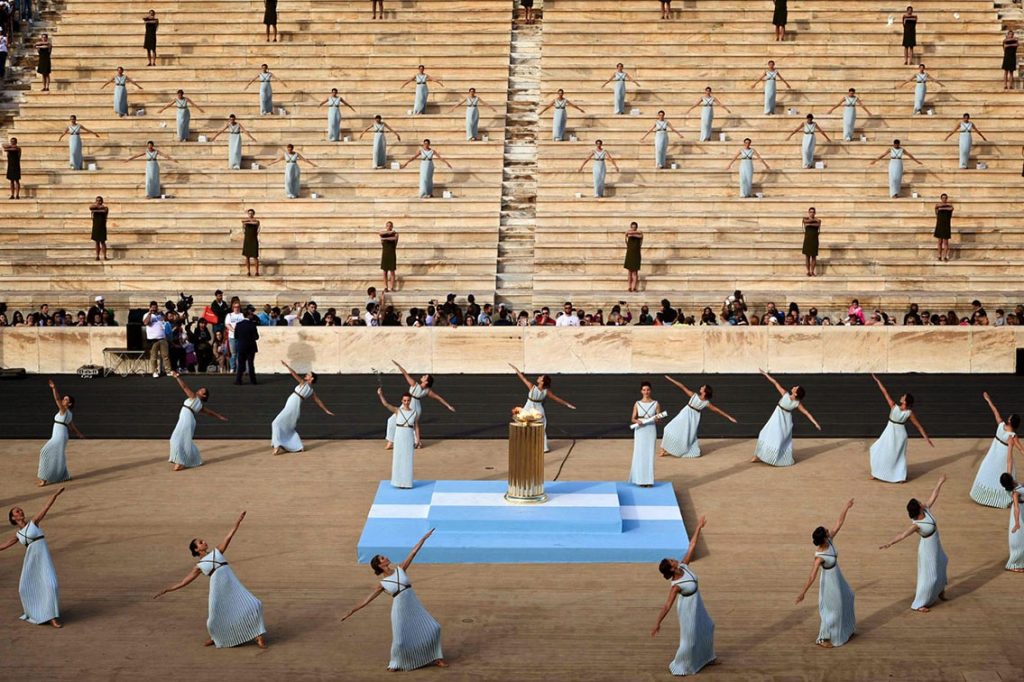 Well, everything from music and art, to nature, history and politics. At the moment I am preparing to create an eco-line – that will make it my first ‘sustainable’ venture since my prize at CSM! My interest in the environment has recently undergone rejuvenation as a result of campaigning for Bernie Sanders in the American primaries. As well as being an incredibly inspiring politician, he is an eco-worrier and that has inspired me.

Obviously now that I have worked on a large scale costume project I have discovered how much I love costume, so as well as the brand collections I am keen to be involved in more costume projects. I also want to collaborate with Museums in Greece – another idea! I tend to normally have several running concurrently! 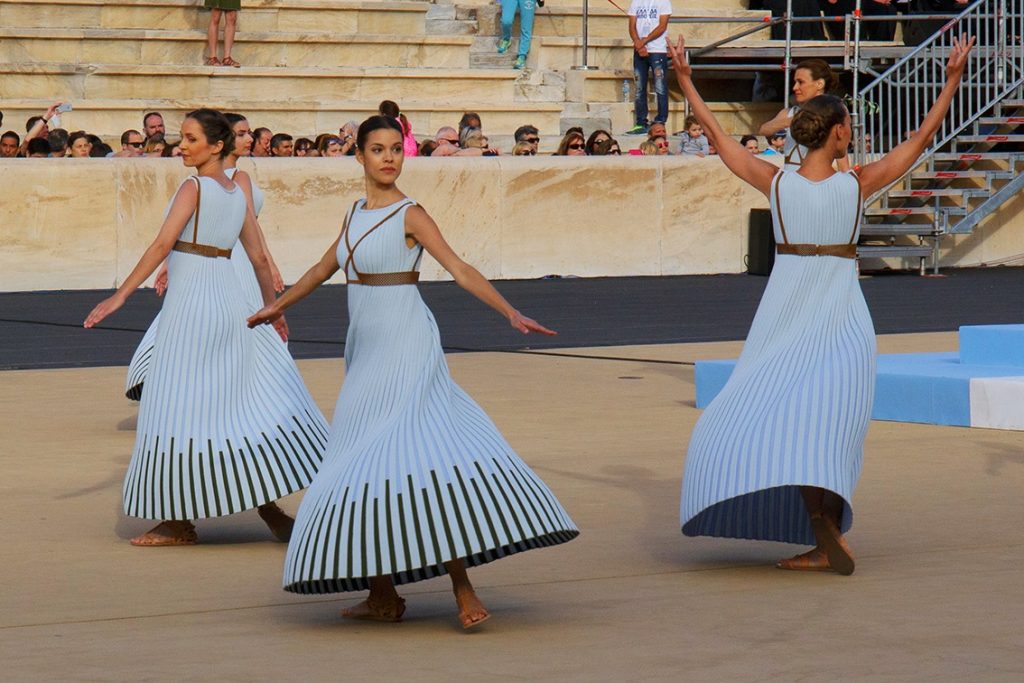 See all of Eleni’s collections here